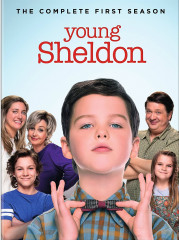 Enjoy the first season of Young Sheldon all over again with this two-disc DVD box-set featuring all twenty-two episodes of the show's debut season along with new bonus features.