104 - A Therapist, a Comic Book, and a Breakfast Sausage 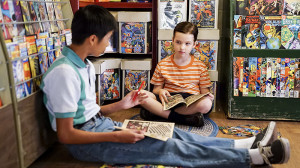 After Sheldon chokes on a breakfast sausage, the near death experience scares him off solid foods. When his parents take him to a psychiatrist to deal with his newfound fear, Sheldon discovers comic books and finds the courage to confront solid foods again.

George Sr.: And Sheldon's fine. You know what he's like. If someone took him, I'm sure they'll bring him right back.

Meemaw: What's all this about choking?
George Jr.: Sheldon almost died this morning.
Meemaw: What?!
George Jr.: Oh, yeah. Dad was shaking him upside down like a ketchup bottle.
Missy: It was great.

George Sr.: If we take him to a shrink, it feels like we're admitting something's wrong with him.
Mary: He hasn't had solid food in five weeks.
Meemaw: Well, if there is something wrong with him, it ain't constipation.

Sheldon: You're sitting in my spot.
Tam: Why is it your spot?
Sheldon: It's complicated. Just move.

When Mary asks the children to hurry up and eat their breakfast so they won’t be late for school, Sheldon starts choking on a breakfast sausage. After Mary calls for George to help, he tries to smack Sheldon on the back to try dislodge the sausage. As everybody but Georgie grows more concerned about Sheldon, his father picks him up and holds him upside down to try remove the obstruction. Mary calls 911 as George performs the heimlich maneuver. As Sheldon struggles for air, the only thing on his mind is the sight of his brother licking the jelly off a knife and putting it back in the jar. After Sheldon finally coughs the sausage up, he gasps for breath before his mother implores him to say something. Sheldon tells his worried parents that they need to throw that jar of jelly away.

As Mary drives Sheldon and Missy to school, Sheldon mentions he has never been late before. Missy admits she is often late, despite Mary dropping her off on time, as she has lots of people to say hi to. Sheldon asks his mother to write him a note explaining his tardiness, which she agrees to do. After Missy says he has the coolest excuse for being late since he almost died, Mary tells them that’s enough talk about death. At school, Ms. MacElroy is addressing the class about the food drive when Sheldon arrives with the note his mother wrote. After she asks him about his medical emergency, Sheldon explains that he choked on a sausage, causing the class to break out in laughter.

At lunchtime, Sheldon goes to the table where Tam is sitting and tells him he’s in his spot. After Tam moves over a seat, Sheldon notices Tam is reading a comic book. Sheldon argues they are for children, saying he outgrew picture books when he was three. When Tam tells him to just eat his lunch, Sheldon is unnerved by the prospect of eating solid food.

At dinner that night, Meemaw is telling the family about a man who asked her out, explaining that she hasn’t said yes yet as the man might be interested in more than just dinner. When Mary asks Sheldon why he isn’t eating, he admits he is worried about choking again. After Mary assures him that he’s not going to choke again, Meemaw wonders what all the talk about choking is about. Georgie tells her about Sheldon’s near death experience while swiping Sheldon’s tater tots. When Sheldon again refuses to eat, Mary promises to wrap his food up for later in case he changes his mind.

The next night at dinner, Mary threatens to chew his food up and spit it in his mouth if he doesn’t eat his pork chop, prompting George to ask to speak to her alone. After his parents leave, Georgie takes most of Sheldon’s food off his plate. When Meemaw offers to blend his food for him, Sheldon agrees to eat it as long as it fits through a bendy straw. In their bedroom, Mary blames herself for rushing Sheldon as he ate breakfast. George tries to comfort Mary and make her see it’s not her fault, but she is very worried about Sheldon’s health. When Mary and George return to the dinner table, Sheldon is sipping his “Pork Shake” while a delighted Meemaw looks on.

Five weeks later, Mary is cutting the crusts off a sandwich before throwing it in the blender for Sheldon as she and Meemaw talk about her recent date. When George walks into the kitchen, he says the blending thing has gone on long enough and accuses Mary of coddling Sheldon. Mary said she thought about taking him to a psychiatrist, but George said he’d outgrow his quirks. George worries that by taking him to a shrink they would be admitting something is wrong with Sheldon, but Mary points out that he hasn’t eaten solid food in five weeks. George agrees they should try find a psychiatrist.

As Sheldon, Mary and George sit in a psychiatrist’s waiting room, Sheldon wonders if the guy will try make him eat solid food, but Mary says they’re just there to talk. When Dr. Goetsch enters the waiting room, he is trying hard to be cool with limited effect. He tells them he wants to talk to mom & dad first, so they leave Sheldon in the waiting room. Dr. Goetsch tells Sheldon to feel free to read any of his comic books. After they leave, Sheldon starts reading an X-Men comic book. In Dr. Goetsch’s office, Mary tells him about how smart Sheldon is, how he’s in high school and how they’re typically used to his unusual interests and behavior, but she admits his refusal to eat solid food has thrown them.

Back home, Meemaw asks Missy and Georgie what they’re watching on TV. After making the show depressing for the kids, she offers to take them out for ice cream instead of having to make dinner. Meanwhile, when Mary and George leave Dr. Goetsch’s office they find an empty waiting room with Sheldon nowhere in sight. Later, Mary is trying to phone home but there’s no answer, while George says he checked the building but couldn’t find Sheldon.

Elsewhere, Sheldon is walking through the “urban jungle” on a mission after his first taste of serialized superheros. When he finds a comic book store, he goes inside to ask for the next X-Men issue. After noticing Sheldon, Tam asks him what he’s doing there after his earlier dismissive attitude towards comic books. Meanwhile, George and Mary are driving around looking for Sheldon. She wants to call the police, thinking Sheldon ran away because they took him to a therapist, but George doesn’t think that’s necessary yet. They drive past the comic book store, unaware Sheldon is safe inside. Back in the store, Sheldon tells Tam he is having trouble with the onomatopoeia in the comic book.

Meanwhile, Meemaw, Missy and Georgie eat in the car outside a Dairy Queen. When Missy asks if Meemaw will have any more babies, she laughs at the notion and jokes that as she gets older, she might turn into a baby and need them to change her diaper. After Missy asks who Meemaw thinks is smarter next to Sheldon, her or Georgie, Meemaw tells them it doesn’t matter as today’s not about Sheldon. When they complain that things are always about Sheldon, Meemaw understands but points out the benefit of him getting most of the attention: their parents aren’t always on their backs. Meemaw mentions how they’re out with her having ice cream for dinner, while Sheldon’s in a shrink’s office. After Georgie says he was told Sheldon was going for a haircut, Meemaw realizes she wasn’t supposed to say that and tells them to compliment Sheldon’s hair anyway.

At the comic book store, Tam sees Sheldon staring at him as he eats Red Vines. Tam offers one to Sheldon, but he says no. After Tam tells him to help himself if he changes his mind, Sheldon takes a Red Vine and plucks up the courage to eat it, finally confronting solid food again.

As Tam and Sheldon walk home in the dark, Sheldon is still talking about comic books. After they see two police cars parked outside Sheldon’s house, Tam cycles away and leaves Sheldon to face the situation at home.