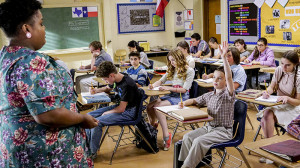 When Principal Petersen thinks the school's curriculum is no longer challenging enough for Sheldon, he encourages Mary and George to consider sending Sheldon to an academy for gifted children in Dallas.

When Sheldon goes to Meemaw's house to show off his new school uniform, he knocks on her door with his characteristic knock. He knocks three times and calls Meemaw's name, and he does two rounds of this.

Flora: I must tell you, in all the years I've been here, I have never seen such glowing letters of recommendation from a student's teachers.
George Sr.: Well, that's real nice to hear.
Flora: Now, listen to this: "Putting aside his superior intellect, Sheldon is a delight to have in the class. He's fun-loving, easy to get along with, and always ready to help another student."
Sheldon: That doesn't sound like me at all.
Mary: Sure it does, sweetie.

Mary: Flora, I have to ask about the living arrangements. That's our main concern.
Flora: Well, I think I can reassure you about that. My husband and I have been hosting a student for the last several years who recently graduated and is now at Princeton. So we have a guest room available in our home.
George Sr.: That's very generous of you. Does your husband work at the school also?
Flora: No, he's retired. He was an astrophysicist for NASA.
Sheldon: Please tell me you don't have a dog.
Flora: No, we're both allergic.
Sheldon: I'm tingling.

Adult Sheldon: As you can see, even as a small child, people cherished having me around and wept over my absence.

Sheldon: What's wrong with them?
Mary: What are you talking about?
Sheldon: They're so quiet. Are they on medication?
Mary: No, they're just smart like you.
Sheldon: I've been going to school in a zoo.

After Principal Petersen thanks Mary and George for coming to see him, they are worried that Sheldon did something. The principal says that as Sheldon isn’t being challenged by the curriculum, he is sometimes being rude to the teachers. When he mentions he had a chat with the head of Wilmot Academy for Gifted Children, who thinks Sheldon would fit right in at her school, Mary says they can’t afford private school. Principal Petersen tells her they sometimes give full scholarships, but Mary is alarmed to see that the school is in Dallas. Mary can not imagine shipping Sheldon off to Dallas, but George says they should think about it first. Before they leave, the principal tells them to call him if they change their minds.

Back home in the kitchen, Meemaw says she can’t understand how they could turn the academy down as she thinks it looks fantastic. Mary knows she’s right, but she can’t bring herself to consider being separated from Sheldon. After Meemaw says they’re being selfish by holding him back, George decides they should ask Sheldon what he thinks. Although Mary thinks he would dismiss being away from his family, when they ask him Sheldon is instantly in favor of switching schools.

At the fancy redbrick school, Sheldon, Mary and George are dressed up as they walk through the eerily quiet hallways filled with studious teenagers. In the office of Dr. Flora Douglas, she says she is very impressed by Sheldon’s transcripts, while he is impressed by her degree. Back home, Missy and Georgie are talking to Meemaw about what it’ll be like after Sheldon moves away. Missy thinks it will be weird without Sheldon, but Georgie wonders if she doesn’t mean “less weird”.

At the academy, Flora says she has never seen such glowing references from a student’s teachers, although Sheldon has trouble believing the high praise describes him. When Mary asks about his future living arrangements, Flora reveals that they would welcome Sheldon to their own home. Sheldon is thrilled that her husband is equally smart, a former astrophysicist at NASA, and that they don’t own a dog.

Back in Medford, when Sheldon goes to Meemaw’s house to show off his new uniform, she welcomes him in to give him a necklace that’s supposedly been in their family for generations. Sheldon doesn’t care for the bird feather or the idea it will magically keep him safe while he’s away.

When Meemaw goes over to the house, she finds Mary crying as she packs a suitcase for Sheldon. Meemaw tries to comfort her as Mary admits she doesn’t if sending Sheldon to the gifted school is the right thing to do. Meanwhile, as Sheldon and Tam play with the train set in the garage, Sheldon tells Tam he will be leaving the next day. Tam hides his emotions well.

In bed that night, Missy and Sheldon talk as they struggle to get to sleep. After Missy asks Sheldon if he will her, Sheldon explains that he’s used to her - like he’s used to string bean, but that doesn’t mean he will miss her. She is sure he will.

At dinner the next day, the family gathers for dinner with Sheldon’s spot at the table empty. After Mary starts to cry as she mentions Sheldon during grace, Meemaw asks George how things went dropping him off in Dallas. George says it was fine, Sheldon’s new hosts are fine people and he seemed very comfortable with it all. Mary remembers it differently, painting the Douglases as monsters. George says they should just have a quiet dinner, but Mary can’t let it go and things quickly get tense.

In Dallas, Flora tells her husband and Sheldon to dig into dinner. When Sheldon asks if they were going to say grace before dinner, Flora explains they don’t do that in their house but he is welcome to do so. Sheldon admits he doesn't believe in God and says grace because it makes his mother happy. After Sheldon starts to eat from his plate, Flora asks him if he likes string beans. Sheldon says he doesn’t, but he eats them.

That night, Missy lays in bed and tries to talk telepathically to Sheldon as George walks by her room. When he gets to his bedroom, Meemaw is still trying to calm Mary down as she worries they made a mistake sending Sheldon away. George snaps and decides to go to Dallas to get Sheldon back. Elsewhere, Sheldon struggles to sleep in his new home on a count of a ceiling fan and a dust ruffle. When he does finally drift off, he’s haunted by the memory of the three of them singing hippy folk songs around the piano.

Later, George drives back home as Sheldon lays on the backseat of the car. When Sheldon tells his dad he’s glad he came to get him, George says he is too. When George puts the car radio on, Sheldon screams “No!” as the radio plays the same song his would-be guardians were singing around the piano. The next morning, Missy is thrilled when she wakes up to find Sheldon back in his bed.

In the teachers’ lounge, Ms. Ingram, Ms. MacElroy and Coach Wilkins drown their sorrows over the return of Sheldon to their school.