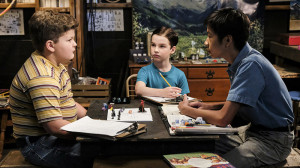 When Mary finds Sheldon playing Dungeons and Dragons with his friends Tam and Billy, she is worried by the game's demonic mythology. In a bid to save her son from the devil, Mary sends Sheldon to Sunday school and sparks an interest in religion.

Adult Sheldon: My mother didn't believe in elves, fairies, or dragons. But she did believe in the devil. And she did not view him as an appropriate playmate for her son.

Mary: Anyway, I'm sorry to drag you into this, but it is demons, so it's in your purview.
Pastor Jeff: It is indeed. In fact, at a recent Young Baptist Leaders Conference, I attended a seminar on satanic leisure activities.
Mary: And?
Pastor Jeff: And the important lesson is, rather than have a parent or authority figure take the offending game away, let God remove it, root and stem.
Meemaw: Question, PJ. Uh, how's the big guy do that?
Pastor Jeff: Simple, Sheldon needs to start attending Sunday school. If he likes books with demons and devils, I've got one that will blow his mind.
George Sr.: What book is that?
Mary: The Bible, George.
George Sr.: Sure, yeah.

As Tam teaches Sheldon and Billy Sparks to play Dungeons & Dragons in the garage, it’s clear that Billy doesn’t really understand the game. When Mary brings them snacks, she is concerned by Sheldon’s description of their mission to find the pitchfork of a devil named Baalzebub. Although she doesn’t believe in elves, fairies or dragons, Mary does believe in the devil and does not believe he’s an appropriate playmate for her son. After she leaves the garage, she shouts for George.

In the kitchen, Mary tells George and Meemaw she is worried about Sheldon playing Dungeons and Dragons. She explains that there are incantations in the book to summon actual demons. When Meemaw tells Mary she should just tell Sheldon to stop playing the game, Mary says it’s not that easy as Sheldon has finally got a few friends and she doesn’t want to scare them off. George doesn’t share Mary’s concern. When he was a kid he was listening to “devil music” like Black Sabbath and it didn’t hurt him.

When Mary goes over to see Billy’s dad, Herschel Sparks, in his chicken shed to express her concerns about the game they were playing, Herschel isn’t worried as long as nobody was making any inappropriate contact with each other. He sees it as step up from Billy’s previous habit of eating dirt. Mary sees she isn’t making any headway and decides to leave, but not before Herschel compliments her hair and offers to slaughter her a chicken for dinner.

At the Medford Mart, Mary talks to Tam’s father while he is busy working the checkout counter. As Mary explains the reason for her visit, Mr. Nguyen asks his wife to talk to Mary. Mrs. Nguyen is busy herself and resists having to deal with Mary, so Le tries to figure out why the game concerns her so much. After Le tells Mary he doesn’t see the issue as a real problem, Treng urges him to just agree with Mary so she’ll go away. Following his wife’s advice, Le says he will speak to Tam.

George and Meemaw try to make polite small talk as they sit in the living room with Pastor Jeff. As Mary comes in with drinks and snacks, she apologizes to the Pastor for involving him, but with the satanic connection Mary thinks it was in his purview. His advice for Mary is that rather than a parent or authority figure removing the offending game, she should let God do it by sending Sheldon to Sunday school. Mary thinks it’s a wonderful idea, although she is worried they might get some pushback from Sheldon. Later, Sheldon tells Pastor Jeff he won’t go as he does not believe in God. Pastor Jeff points out that Sheldon wants to be a scientist and no good scientist would come to a conclusion without first researching the matter. Flustered by Pastor’s Jeff’s undeniable logic, Sheldon casts an invisibility spell on himself and runs out of the room.

Later that night, Mary sees Sheldon’s light on and goes to ask him why he isn’t asleep. Mary is excited when he answers that he’s studying for Sunday school by reading the Bible. Despite his question about whether there are any people of the Amalek tribes in town, who supposedly should be killed along with their cattle, Mary is thrilled to see Sheldon taking an interest in religion.

In Sunday school, Pastor Jeff leads the class through the Lord’s Prayer before he introduces them to two new students, Sheldon and Missy. Billy Sparks tests the Pastor’s patience when he raises his hand to point out that he knows them. When the pastor asks a question about a passage in the Bible, Sheldon answers and tells the Pastor he read the gospels last night, prompting Missy to say he’s a suck up.

As George, Mary and Meemaw watch a football game in the den, they look over at Sheldon reading the Bible in the kitchen. When Sheldon comes over to say he’s finished the Bible, Mary says she’s happy to see him taking an interest in religion. Mary’s mood changes when Sheldon says that he is now going to explore other religions to enlarge his database, arguing that the only data he needs is from their Baptist faith. George is far more open to Sheldon’s experimentation than his wife.

At school, while Sheldon and Tam eat their packed lunches in the library, Sheldon asks Tam about his Catholic faith. When Sheldon starts to feel bad as he hears about some of the Catholic rituals, Tam says that’s how you know it’s working. When Ms. Hutchins walks by with a trolley full of books, Sheldon asks her about her religion. She is quite dissatisfied with the Mormon stance on women’s place in the afterlife, especially for single women like herself.

When Meemaw takes Sheldon to Ira’s furniture store to talk about Judaism, Ira is happy to help her out. Ira warns Sheldon that the Jewish faith has a lot of ancient rules that hemm your life in, that they’ve suffered a lot as people, and that being Jewish will mean he can’t get into a good country club. Hearing that Sheldon probably intends to remain in Texas when he’s older, Ira suggests he stay a Baptist and perhaps wear a cross.

Back home, Mary goes to speak to Sheldon at the kitchen table as he reads religious books. Mary wants Sheldon to know that even though he likes researching things, she thinks there is only one true God. When Sheldon asks if she would be angry if he chose another religion, Mary says she could never be angry at him.

Asleep on his book at the kitchen table, Sheldon has a dream in which he’s in a mystical cave where two giant figures, 1 and 0, tell him they are the binary code that underlie the universe. Just as they’re about to tell him the secret of the universe, George Jr. wakes Sheldon up as he drools over his book.

The following Sunday, Pastor Jeff asks the kids what God means to them. Sheldon steps up first and tells the class that he’s spent the last week studying religion and has come to a conclusion. He is going to start his own religion, Mathology, where the only sin is being dumb. As Shelon admits he’s there to convert the class, Pastor Jeff hurries him out of the room to see his mother.

In his garage, Sheldon leads a sermon in his Church of Mathology for the only attendant, Billy Sparks.