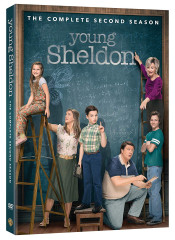 In February 2019, CBS renewed Young Sheldon for a further two seasons, taking the show through to its fourth season in 2020/21.