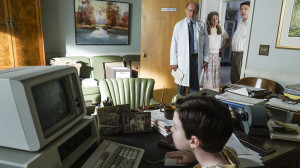 When a visiting NASA representative dismisses Sheldon's rocket science, he sets out to prove the gentleman wrong.

When Sheldon goes to Meemaw's house to ask for money for a computer, he knocks on her door with a minimalist version of his ritual knock. Sheldon knocks three times and calls for Meemaw, but he only does one round of this.

Adult Sheldon: People often wonder why I chose to pursue a career in theoretical physics. I usually respond by saying I wanted to unravel the inner workings of the universe. But the real answer was I wanted to prove this nincompoop wrong.

George Sr.: Damn it. I've had enough of this. Sheldon, get up.
Sheldon: What's the point?
George Sr.: We're going to Houston.
Sheldon: Really?
George Sr.: Yeah. You and me are gonna give those space monkeys a little talkin' to.
Adult Sheldon: I often found my father to be a strange and puzzling man, but at that moment, I never loved him more.

Sheldon: Hello. Yes, you can help me, Dorothy Fitzpatrick. I'm interested in taking out a second mortgage. I'm nine years old. Why do you ask? That's called age discrimination, Dorothy, but I'm willing to let it slide. I'm glad you find me cute, but I'm deadly serious. I need funds to buy a computer. No, the house isn't in my name. I'm nine. We've established this. I do prepare the taxes for my parents, and if we tighten our belts, we'll have sufficient equity for the loan.

Meemaw: So I saw a lawyer today.
Mary: Why?
Meemaw: I'm putting together my last will and testament.
George Sr.: We're gonna miss ya.
Mary: George.
Meemaw: Don't worry. I ain't leaving him squat.

At the school, Mr. Givens introduces the class to his old college roommate, Dr. Ronald Hodges, who is now an administrator at NASA. When Dr. Hodges talks to the class about what NASA is working on beyond the space shuttle, Georgie raises his hand to ask about the movie Aliens. After Dr. Hodges mentions one of the problems holding NASA back is how expensive each space launch is, Sheldon raises his hand to suggest they use reusable boosters instead of letting them fall back into the ocean. Dr. Hodges brushes Sheldon’s suggestion off as cute but unworkable. He gives Sheldon a NASA patch and quickly moves on. Adult Sheldon says that proving this nincompoop wrong is the reason he became a theoretical physicist.

Over dinner, Meemaw mentions that she saw a lawyer today to put together her last will and testament. When Mary notices that Sheldon hasn’t touched his dinner, she asks him what’s wrong. Sheldon says he was just thinking about rockets. Later that night, as George turns off the lights around the house, he notices the one in Sheldon’s room is still on. When he goes into the room, he finds Sheldon still up at his desk working on rocket calculations. After George tells him to go to bed, Sheldon asks if they can afford a computer. When George reminds Sheldon that he does their taxes, he realizes the answer is no. After George says good night and heads to his bedroom, he turns back and sees Sheldon’s light come back on. George decides to leave him to it and goes to bed.

The next day, Sheldon goes over to Meemaw’s house to ask how much money he’s getting in her will. After she closes the door on him, he knocks again. Sheldon explains that he wants a computer, but it costs thousands of dollars. Meemaw reaches into her brassiere and hands him some change to get him started. Back at home, Sheldon phones up the First National Bank of Medford and asks to speak to a loan officer, but doesn’t get very far with her. When Mary comes in and finds out who he’s speaking too, she hangs up the phone.

In the school library, Tam finds Sheldon at a computer and asks why he wasn’t in math class. Sheldon says he needed a computer with a modem to download thrust-to-weight ratios from the Johnson Space Center FTP server so he can show his work to the guy from NASA and laugh as he begs for mercy. Tam says Sheldon sometimes sounds like a super villain.

In the car that evening, Sheldon asks his mother if she will take him to Radio Shack. After she say she’s too busy today, but maybe at the weekend, Sheldon is insistent. When they get home from the supermarket, Sheldon is still begging his mother to take him to get a modem. When Mary says no again, Sheldon has a meltdown.

Later that night, Meemaw goes to Mary and George in the kitchen to say she finally got Sheldon calmed down, with cough syrup. George says they can’t keep putting up with this behavior. When George suggests they ground Sheldon, Mary points out he would thank them if he didn’t have to play outside. Although Meemaw says it’s just a tantrum, George and Mary decide that they should punish Sheldon by not taking him to RadioShack for a month. Thus began the longest month of Sheldon’s life.

Later, Missy goes to her parents to say something’s wrong with Sheldon. When they reach his bedroom, Sheldon is holding his stomach and says his symptoms are consistent with an ulcer. After Sheldon insists he’s sick, despite his history of hypochondria, Mary thinks they should take him to a doctor.

At a doctor’s surgery, the doctor says Sheldon does indeed have an ulcer. When Mary wonders how it happened, Sheldon points out he’s been under unusual stress, not being allowed to go to Radio Shack for a month. After George sends Sheldon out of the room, they explain to the doctor that Sheldon is trying to help NASA land rockets, out of spite. When the doctor writes Sheldon a prescription for Zantac, they hear the sound of a modem dialing up and look out to find Sheldon using the doctor’s computer.

When Missy goes to her parents to say something’s wrong with Sheldon again, they find him shouting that he has figured it out. The next day, with his research complete and his ulcer on the mend, Mary helps Sheldon mail his research notebook on "Rocket Rentry and Retropulsion" to NASA. Then he waits as, day after day, he doesn’t hear back from NASA. Eventually, Sheldon collapses face down on the couch. After Missy tells her parents that something’s wrong with Sheldon, again, Mary explains to George that NASA never responded to Sheldon’s science stuff. George says he’s had enough of this and asks Sheldon to get up. When Sheldon can’t see the point, George tells him they’re going to Houston.

With the whole family in the car on their way to Houston, Georgie wonders why he couldn’t stay home. Missy and Georgie want to stop by the ostrich farm they pass, but George Sr. insists they’re going straight to Houston and straight back. When Sheldon gets worried he will be carsick, Mary offers to have George pull the car over. Sheldon says he will be okay, but moments later he throws up.

As the family sit around in the reception outside Dr. Hodges’ office at NASA, George goes to tell his secretary that they’ve been waiting an hour. When he finally gets fed up of waiting, George marches in to his office and tells Dr. Hodges to take Sheldon seriously, or else he’ll have to take him seriously. Dr. Hodges then buzzes for Sheldon to come right on in.

In Dr. Hodges’ office, Sheldon is standing on a table at a blackboard outlining his math. Outside, George notices Sheldon has been in there a while while Georgie and Missy get restless. Back inside, after Dr. Hodges tells Sheldon this is groundbreaking work, Sheldon asks for an apology. Dr. Hodges says that although Sheldon’s work is theoretically correct, they just don’t have the technological capability to execute it yet. Sheldon is happy to hear he’s ahead of his time. After he tells Dr. Hodges to call him when they catch up to him, Sheldon leaves and tells his family they can go now.

As they drive back, avoiding the ostrich farm, Adult Sheldon wonders what would have happened if his father didn’t stick up for him that day. Sheldon thanks his dad, prompting Mary to tell him how proud they are of him.

April 8, 2016: CNN reports that SpaceX has successfully landed its rocket back down on a drone ship in the Atlantic Ocean. As Elon Musk gets ready to give an interview to CNN, he’s reading Sheldon’s “Rocket Eentry and Retropropulsion” notebook from November, 1989. Before the CNN interviewer arrives, Musk hides the notebook back in a drawer.