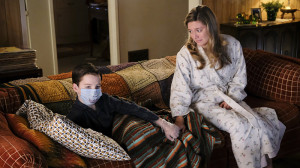 After Sheldon's teacher sneezes in class he decides to brave the school's punishment and skip class in a bid to avoid catching the flu. As more and more people appear to be sick, Sheldon's fear of the flu rises and he takes extreme measures to insulate himself from illness.

When Sheldon's valiant efforts to avoid coming down with the flu falter, Mary sings Soft Kitty to him as he lays in bed with a fever. When Sheldon asks his mother to sing it again, Mary tells him to blow his nose first.

George Jr.: I think the saddest part about it is just how sad it is.

Meemaw: Mind if I take a crack at catching the Road Runner?
Mary: What are you gonna do that I couldn't do?
Meemaw: Oh, a little trick I learned trying to get prairie dogs out of the hole. Of course we'd whack off their heads with a golf club. I'm not gonna do that to Sheldon.

Meemaw: Just when you think he's gonna zig, you get a big old zag.

Adult Sheldon: As you can see, my meemaw successfully lured me back into the world by reminding me of my brave Texas ancestors. Their blood ran through my veins. I was a true son of the Lone Star State. Albeit a true son with an incredibly fragile immune system. I woke up the next morning with a temperature of 102 and a head packed full of mucus.

Ms. MacElroy is explaining similes to the class when George Jr. offers an example of his own, “Your love is like bad medicine” by Bon Jovi. When Ms. MacElroy suddenly sneezes, Sheldon immediately starts packing up his books. Adult Sheldon explains that despite being called a germophobe he isn’t overly concerned by one sneeze, but during a flu season a second sneeze means a plague is upon the land. After Sheldon gets up, covers his face with his elbow, and walks to the door, Ms. MacElroy warns him he can’t leave class without a hall pass. Adult Sheldon explains he loves rules and sees them as a pillar of society, but he also realizes they’re no use to a dead man. After Ms. MacElroy refuses to give him a hall pass, Sheldon walks out of class.

As Sheldon sits reading a book outside the principal’s office, he asks the receptionist if he looks like he’s getting sick. When she answers that he looks pale, he’s relieved to hear that things are normal. Meanwhile, Principal Petersen tells George and Mary that he thinks a punishment is in order. George says he and Mary couldn’t agree more. Principal Petersen wants a few days’ detention, but Mary thinks that’s harsh. As Principal Petersen and George Sr. reminisce about the days when principals could paddle students, Mary is not impressed.

When the receptionist sneezes and blows her nose, Sheldon is quickly disturbed. When Principal Petersen comes out to ask him into his office, Sheldon has run off again. After Sheldon struggles to make his way through the hallway with all the sneezing and coughing students, he eventually escapes the building and makes it onto the football field as the team practice.

At home, George and Meemaw are drinking beer as they discuss Sheldon’s situation with Mary. Meemaw thinks the idea of Sheldon in detention is funny. George thinks it’ll be good for Sheldon as he needs to learn he’s not special, but Mary argues that Sheldon had a legitimate concern in avoiding the flu. After Mary worries that Sheldon will be mugged by hoodlums in detention, George dismisses her worry but concedes that Meemaw had a good idea when she suggested giving Sheldon a few dollars to buy himself some protection.

As Georgie sneakily tries chewing tobacco in the back garden, Sheldon goes to ask him for advice on surviving detention. Georgie tells him to stick close to the teacher or else the other kids will kick his “A word”. After he tells Sheldon to get lost, Georgie tries the chewing tobacco again but doesn’t seem to find it as pleasurable as he expected.

At school the next day, Sheldon is walking from class with Tam. Tam says he’ll see Sheldon tomorrow - he hopes - as a menacing kid walks into detention. When Sheldon goes into the detention room and introduces him to the other people, the older and much more intimidating students are puzzled by him. When Mr. Givens arrives to supervise detention, he is surprised to see Sheldon sitting in front of him. After Sheldon explains how he ended up in detention, Mr. Givens sympathises as something is going ‘round; he actually has a tickle in his throat. Once again fearful of catching something, Sheldon quickly gets up and walks out of detention.

Back at home, George and Meemaw are drinking as they talk with Mary about Sheldon’s one-week suspension. After George says the real issue they have to deal with is Sheldon’s germophobia, Mary thinks they need help on this and should take him to see the doctor who calmed him down when he thought he had an enlarged prostate.

At the doctor’s practice, Mary and Sheldon sit in front of Dr. Eberland as he puts out a cigarette. After the doctor jokes about what may be ailing hypochondriac Sheldon, Mary explains that Sheldon’s not sick but has become overly concerned about getting a cold or the flu. The doctor tries to reassure Sheldon that he has nothing to worry about, but Sheldon reels off the statistics about how deadly influenza can be. When Sheldon wonders how the doctor doesn’t get sick despite being around sick people all day, Dr. Eberlands mentions that he takes precautions like washing his hands, wearing gloves and a mask.

At that dinner table that evening, the family are in silence as Sheldon sits there wearing rubber gloves and a face mask. Later that night, Sheldon is asleep in his rubber gloves and face mask as Missy “improves” the mask with a marker pen. When Sheldon wakes up with Missy hovering over him, she says she’s not feeling so good and coughs in his face. Sheldon jumps out of bed and runs out of the room.

Later, Sheldon is watching a troubling TV news report about flu when Mary comes to see why he’s still up. After Sheldon worries that they’re all going to die, Mary struggles to take him seriously with the nose and mouth Missy drew on his mask. Mary sits down with him and, although he doesn’t believe in it, prays for him. Sheldon thanks his mother, saying even though he doesn’t believe in prayer, it felt good. When he wonders why his mother keeps smiling, she tells Sheldon to look at his mask. As Sheldon shouts out Missy’s name, she smiles to herself back in her bedroom.

The next morning, as Missy and Georgie eat breakfast, Missy is annoyed that they have to go to school and Sheldon doesn’t. Mary insists it’s fair because Sheldon loves school and doesn’t get to go, while they hate school and have to go. When George says Sheldon should do chores during the day and can’t just sit around playing with his trains, Georgie is in full agreement and praises his father’s parenting. Mary heads out of the kitchen, telling George she is going to give Sheldon a list of chores.

When Mary tries to get into the garage through the side door, it’s locked and Sheldon refuses to open it. After she walks around and raises the garage door, Mary finds Sheldon has erected a plastic wall around himself and his train set. Sheldon explains that he’s wearing his Halloween space suit in case of any breaches in his germ-proof hedge. When Mary tells him he can’t stay there forever, Sheldon says he’s got a refrigerator, a sleeping bag, and can make anything else he needs out of Lego. A concerned Mary calls for George’s help.

Later, Mary, George and Meemaw are standing outside the plastic bubble as Sheldon plays with his train set. George wants to tear the plastic sheets down, but Mary says you can’t force him out of a phobia. Seeing they’re not going to make any progress, George decides to take the kids to school. After Mary says she’s sure Sheldon will be out by the time he gets home, George doesn’t share her optimism. When Sheldon asks his mother to close the door so can use the sink, Mary closes the door as Meemaw laughs. At school, Ms. MacElroy takes attendance and notices Sheldon is absent. When the girl who sits next to Georgie asks if his brother is okay, Georgie tells her he’s very sick and things aren’t looking good. She feels bad for him and reaches out her hand to hold his.

Back home, Mary asks Sheldon what his long-term plan is. As he explains that he’s working on the math to turn the garage into a sustainable ecosystem where he’ll grow food fertilized with his own feces, Meemaw is in hysterics. Mary tells her mother to go home if she’s not going to be helpful. Mary begs Sheldon to come out, but he insists he can’t. Mary’s increasing desperation only makes it funnier for Meemaw. At school, Georgie is sharing the sad news about Sheldon with a group of girls. After one of the girls gives him a sympathy hug, he invites the other two to do so as well. As the three girls comfort Georgie, George Sr. walks by and is perplexed by the scene.

At home, Mary tells Sheldon she’s had enough of this nonsense and threatens to come in. Sheldon puts his space suit helmet on as Mary breaks through the plastic shield. As Mary chases him around the garage, Meemaw wants to go get her video camera to record this. Back inside the house, Meemaw is pulling cookies out of the oven as a dejected Mary sits down at  the table with a bottle of beer. When Meemaw asks if she can take a crack at catching the roadrunner, Mary can’t see what her mother could do that she couldn’t.

Outside, Meemaw tells Sheldon she’s got a treat for him, her chocolate-chip cookies. When she invites him to come out to grab a couple, Sheldon says he can’t. Meemaw decides to leave the plate of cookies out on the driveway so he can come out when he’s ready. As she walks away, Sheldon grabs the plate from within the plastic bubble and pulls it through. Changing tack, Meemaw gives Sheldon a pep speech extolling the virtues of his brave Texan heritage. As Meemaw sticks her head through the plastic, Sheldon puts his space helmet on while she continues telling him about famous Texans who weren’t afraid of little colds: Sam Houston, Jim Bowie, and Sissy Spacek. When Meemaw urges him to come out and eat his cookies in the world like a man -  a Texan man - Sheldon is finally convinced. As he removes his helmet and leaves his bubble to eat the cookies, Mary is impressed.

The next day, the garage is back to normal and Sheldon is nowhere in sight. Adult Sheldon talks about how his Meemaw lured him back into the world. As he remembers, this true son of the Lone Star state had an incredibly fragile immune system. He woke up with a temperature of 102 and a head full of mucus, but there was one silver lining. As Mary comforts Sheldon in his bed, placing a blanket over his forehead, she sings Soft Kitty to him. When he asks for another performance, she makes him blow his nose before singing the song again.