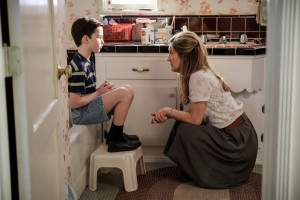 After Sheldon starts learning self-defense, Mary and George are disturbed to find out he is being bullied. When the identity of his unlikely tormenter is revealed, Sheldon's parents disagree on how to handle the situation.

Adult Sheldon: Existing in a world of predators isn't easy, but we prey have developed several natural defenses to help us survive. There's playing dead, warning calls, camouflage, and, last but certainly not least, good old-fashioned running away. A little screaming never hurts either.

Adult Sheldon: The perilous journey from the bus stop to my front door was 97.5 meters. FYI, insisting on using the metric system in East Texas is another reason I was hunted by predators.

Meemaw: I bowled a new high score last night.
George Sr.: Nice.
Meemaw: I got two turkeys.
Missy: What's a turkey?
Meemaw: It's three strikes in a row.
Missy: Why do they call it a turkey?
Meemaw: Well, when they first invented bowling, they used to just throw frozen turkeys at the pins. Eventually, they switched to balls to cut down on the smell.
George Sr.: Why you lying to her?
Meemaw: I find it keeps my mind sharp.

George Sr.: The little Sparks girl?
Mary: You're kidding. She seems so sweet.
George Jr.: He says she slaps him around, takes his lunch money. She even put a tadpole down his shirt.
Meemaw: Poor kid. He tucks in those shirts.

Mary: She looks harmless.
Meemaw: She's cute. So she probably gets away with stuff. I'm like that.

After Adult Sheldon describes the balance between predator and prey in delicate ecosystems, an anxious Sheldon is on the school bus as the rowdy kids around him shout, throw stuff and play loud music. When the bus pulls up at Sheldon’s stop, he asks the driver if he could be dropped off closer to home, but the driver reminds him he’s not allowed to do that. As Sheldon ventures off the bus onto the mean streets of Medford, he ducks and dives behind objects as he runs to his front door. As an out-of-breath Sheldon makes it into his house unimpeded, he needs a Yoo-hoo.

As Sheldon eats his lunch in the library, he is reading a book about Jiu-Jitsu. When Tam sits down with his lunch, Sheldon explains that he’s decided to learn self-defence as he’s quite small and will be for several years. When Sheldon mentions that one of the books mentioned a Vietnamese martial art, Tam says he’s a blue belt in Vovinam. Sheldon is impressed, but Tam tells him not to be as that’s the belt you get with the uniform.

In gym class, as the other kids do star jumps, Sheldon explains to Tam that Jiu-Jitsu is based on using your attacker’s momentum against him. It’s just physics. Sheldon asks Tam to take a run at him, explaining he will use Tam’s inertia will take him down. When Tam complies with Sheldon’s request, he struggles to get Tam down. Later, as Tam holds Sheldon in an arm lock, he unsuccessfully tries to wriggle free. As they both lay on the mats in a leg lock, neither of them is sure how to break the deadlock. After school, Sheldon is once again forced to get off the bus at the stop and make the perilous journey to his home on foot. With military precision, he climbs a tree to observe and hops in the back of a van. He makes it inside and relaxes with a can of Yoo-hoo.

At breakfast, Meemaw tells Mary and George that she bowled a new high score last night. After Mary calls Sheldon to breakfast, he wraps his body in bubble wrap and puts his school clothes on in his room. As they hear Sheldon shuffle in to the room in his oddly filled clothes, the family wonders what’s going on. Sheldon explains that he must be a little sore from doing Jiu-Jitsu with Tam yesterday. When George wonders why Sheldon was doing Jiu-Jitsu, he explains that they’re boys and roughhousing is what they do.

As Sheldon sits down at the table, his bubbles keep popping, prompting Mary to investigate. When she rolls up his pant leg and sees the bubble wrap, Sheldon says it’s an extra layer of protection as someone’s been bothering him. Mary wants the name of whoever is scaring Sheldon, but George thinks Mary should think twice before jumping in. After George sends Sheldon to his room to take off the bubble wrap, he warns Mary to proceed with caution as handling bullies is tricky and it’s easy to make things worse. Meemaw thinks George is right, but Mary says she can’t just stand by.

When Mary goes to see Georgie, he’s still asleep in bed. He’s not worried about being late for school, as he slept in his clothes. Mary asks if he knows anything about who’s picking on Sheldon, but Georgie says he doesn’t. Mary asks him to look after his brother. As Georgie and Sheldon walk to the school bus stop, Georgie is telling Sheldon about his  dream. When Georgie realizes Sheldon is no longer by his side, he looks around to find him cowering behind a garbage bin, watching as the Sparks family get into their car. After Georgie asks if it’s Billy or his dad giving Sheldon trouble, Georgie is worried as he realizes the culprit is the little Sparks girl.

Later that day, Georgie is filling Mary, George and Meemaw in on what the Sparks girl has been putting Sheldon through. Later, Mary, George and Meemaw peek through the fence in their backyard, observing the Sparks girl playing in her sandpit. Mary thinks she looks harmless, but Meemaw says she’s cute so she might be able to get away with stuff - like she does. Mary tells George he has to talk with her parents, claiming he’s more intimidating than her.

When George goes over to the Sparks household, Billy answers the door and George asks for his father. After a slow and torturous conversation, Billy finally gets Herschel to the door. After Herschel asks how he can help, George reluctantly admits that Sheldon is being bullied by Bobbi. Herschel can’t believe his sweet little daughter could be causing trouble for an older boy. When Herschel calls Bobbi over, she denies picking on Sheldon and her father believes it. She shoots George an evil look as she walks away scot-free. As George thanks Herschel for hearing him out, Herschel asks George if his wife sent him over here, but George doesn’t want to talk about it.

When George returns home and Mary asks him how it went, he says he handled it. Meanwhile, as Sheldon plays with his model trains in the garage, he’s puzzled when the train suddenly stops. As he looks over at the control box, an angry Bobbi is staring at him. As she walks towards him, unhappy he told on her, Sheldon warns her he’s read a book on jui-jitsu.

Later, as Sheldon screams, his mother is preparing a swab of bactine for a graze on his knees. When Mary asks him what happened, Sheldon explains that Bobbi Sparks came into the garage and, when he tried to defend himself with jui-jitsu, he tripped and fell. Mary’s sorry he’s having to go through this. With his knees cleaned up, Mary tells Sheldon that you’re not supposed to raise your hand to a woman. Sheldon says he won’t, as he doesn’t want to hurt himself again. As Mary walks Sheldon out of the bathroom, he asks if she ever had a bully growing up. Mary asks if he’s met his grandma.

After Mary confronts George over his lack of action, she grabs her bag and heads out to handle the situation. Meanwhile, Sheldon goes to Missy as she’s watching TV to ask for her help. After Sheldon says he’s being bullied by Billy Sparks, Missy turns off the TV. Sheldon thinks he’s found a loophole in the rule that a man should not raise his hand to a woman: send in another woman. When Missy wonders why she would want to hit another girl, Sheldon offers to pay her his life-savings. Missy says it’s a start, but she also wants his TV privileges in the afternoons when Professor Proton is on.

Meemaw enjoys a strike at the bowling alley. Meanwhile, Mary goes to see Brenda Sparks at the front desk. Mary wonders what Brenda is going to do about the situation, but Brenda is unhappy at Mary bringing a personal issue to her place of business. After Brenda calls Meemaw to the front desk, Meemaw begs Mary not to make a scene at the place where she socializes three to four days a week. Meemaw warns Mary that Brenda can be mean, but Mary thinks she can play that game too. When they return to the front desk, Brenda sprays Mary with the shoe spray and says she’s done with being nice to the Cooper family.

In his chicken coop, Herschel and George sit down and enjoy a can of beer each. Herschel even has a TV out there for when he wants to get away from the family. When Missy returns from her trip to confront Bobbi, Sheldon asks her how it went. At the Sparks house, she and Bobbi had tea with Billy and even put make-up on him, and danced. Still, Missy assures Sheldon she handled it.

Back in the chicken coop, George apologizes for Mary going to the bowling alley. When Herschel says sorry for Brenda sending him to his door, George says it’s not a problem as this is the most fun he’s had all week. Herschel feels bad about what’s happening between Sheldon and Bobbi and promises to talk to Bobbi. As George says he should be getting back, he and Herschel decide to get their stories straight for their wives. When Brenda shouts for her husband, a terrified Herschel tells George there’s a hidey-hole under the coop, but only room for one person.

As Sheldon makes his way home from the bus stop, Adult Sheldon mentions the natural defences that prey take on to survive in a world of predators. As Bobbi rides her bicycle on the street and spots Sheldon, he screams and runs home. He manages to close the door on Bobbi before she catches him.