105 - A Solar Calculator, a Game Ball, and a Cheerleader's Bosom 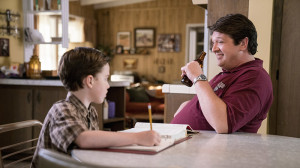 When Sheldon helps his father use statistics to improve the performance of the high school football team, his popularity at school soars.

Tam: Hey, I've been looking all over for you. Do you know how popular we are?
Sheldon: We?
Tam: Yeah. I put the word out I was helping you with the football stats. And since I'm Asian, they bought it.

Missy: What are you doing?
Sheldon: Trying to calculate the odds of the Dolphins covering the spread next Sunday.
Missy: I like dolphins. They talk out of that hole in their head.

Adult Sheldon: In Texas, the Holy Trinity is God, football and barbeque, not necessarily in that order.

Tam: Are you okay?
Sheldon: No, I'm not. [slides over his paper]
Tam: Yeah, so?
Sheldon: A B-plus that's the beginning of the end.
Tam: The end of what?
Sheldon: My life. If I don't make some changes, who knows how far I'll fall. I could wind up a drug addict, or a lawyer.

As the family gathers in the living room to watch a football game, Sheldon is reading a physics book. Meemaw is shouting at the TV that she doesn’t care if the team wins so long as they cover the spread, surprising Mary who didn’t think her mother was still gambling. When the family call for the Texas A&M team to punt on the fourth down, Sheldon gives them a lesson on the statistics which show going for it to be more effective strategy.

In their bedroom that night, Mary tells George she is worried about Meemaw and her gambling. When George asks if she thinks Sheldon is right with his statistics on football, Mary says she would think so. After all, Sheldon has been doing their taxes for years and they’ve never been audited.

As George Sr. drives Georgie and Sheldon to school in his pick-up truck, Sheldon wonders why his mom isn’t taking him as usual. George says he wants to spend time with him, but Sheldon is more concerned about the safety of sitting up front. When George asks him if the statistics he mentioned for Texas A&M would hold true for his team at the high school, Sheldon can’t see why not. Georgie can’t believe his dad would consider taking Sheldon’s advice on football.

On the football field at the high school, George decides to take Sheldon’s advice and go for it on the fourth down, rather than following the typical advice to punt. His assistant coach doesn’t agree, but George insists. After Mary tells a guy in the audience that her little boy devised the move, it looks like a failure for the team. But then the referee says there’s too many men on the field and they should replay the fourth down. Despite the chance to follow convention, George still wants to go for it and, this time, it works.

At home that night, Meemaw says good night to Missy and then turns to Sheldon to say she wants a favor. After Meemaw asks him if the statistics could be applied to knowing how much a team might win by, Missy tells her that their mom said she shouldn’t gamble. When Mary and George come to see Sheldon with a gift -  the winning football for his help leading the team to victory - he is more concerned by the fact it’s dirty. When Mary points out this is his father’s way of saying he’s proud of him, Sheldon thanks his dad but would still rather not touch the ball.

When the bell rings at school, Sheldon packs his briefcase and leaves the class. After helping the football team for five weeks, Sheldon’s profile has been greatly improved at the school. In the hallway, a small mob forms around Sheldon, who is less than happy with all the hugging, hair tousling and high fives.

After Sheldon finds solace in the library, Tam comes to see him to say how popular they are. Tam explains that his image has been helped by the perception he rumors he is helping Sheldon with the math, which he spread. Sheldon explains that he’s not happy with all the people touching him, though Tam at least is impressed that a cheerleader hugged Sheldon to her bosom. When Tam tries to high five Sheldon, he explains he is done with high fives because he can’t keep washing his hands.

Back home, Sheldon is doing his homework in the kitchen when George goes for a beer. After George asks if he has any more ideas for next week’s game, Sheldon says he does but he needs to finish his homework first. When Georgie asks if he can help them knock about ideas for next week’s game, George sends him out to his truck to get a present for Sheldon. George bought him a solar-powered pocket calculator, but Sheldon says he doesn’t need a calculator; he is one.

In his messy bedroom, Georgie is listening to music loudly and throwing a ball against the wall when Mary comes in, telling him turn the music down and tidy the room. After he refuses to tidy up, Mary grounds him. When George leaves Sheldon in the kitchen to see what’s going on, Meemaw goes to see him and ask about the stats for this week’s games. Sheldon says he has to finish his homework and help his dad before he can help her. Meemaw tries to pull rank, reminding Sheldon of the cookies she makes for him. When Mary returns to the kitchen, she tells Sheldon it’s bed time, even if he hasn’t finished his work yet.

When the doorbell rings, Mary answers the door to find a smartly dressed Tam, who asks if he can speak to Sheldon. Mary says no as it’s late and he’s in bed. Tam explains he wanted Sheldon to go to a party with him, but Mary thinks that’s crazy and says goodbye to him. In Sheldon and Missy’s bedroom, he is still awake, working on the football stats for Meemaw in bed. When Tam knocks at the window, Sheldon opens it to see what Tam wants. After Tam invites Sheldon to a party across the street, Sheldon say’s not interested, but Missy clearly is. Tam explains he just needs Sheldon to get him in the door, and after that he can come back to bed. When Sheldon says he would have to ask his mom, Tam stretches the truth and says there’s no need as she knows all about the party. Sheldon finally agrees, while Missy wants a minute to change.

Missy is wearing a costume while Sheldon is still in his pajamas as Tam walks them to the party. After Tam rings the doorbell, the guy inside is thrilled to see Sheldon and they all go in. Meanwhile, Mary is awake and still upset as they hear the noise from the party across the street. When Mary worries the party will wake up the kids, George offers to go over and say something. But when Mary says he should, George admits he was bluffing and doesn’t want to have to put his socks back on. After they turn the light off and get into bed, Mary admits she feels bad about yelling at Georgie. Mary thinks he’s feeling left out by George and Sheldon spending so much time together. George turns the light back on, wondering what she’s complaining about after always pushing him to spend more time with Sheldon.

Back at the party, Missy is the center of attention as she dances, while Sheldon is crowd-surfing - against his will. Georgie is surprised to find his younger siblings there. When he says they’re not supposed to be there, Sheldon points out that neither is he as he’s grounded. When Georgie says he’s taking them home, Missy is disappointed while Sheldon is relieved.

At school, Sheldon is feeling the effects after a night of partying. His parents didn’t find out, but he paid the price with a B+ on a math test. When Tam comes to see Sheldon, excited after a cheerleader acknowledged his existence, he realizes Sheldon isn’t okay. Sheldon shows Tam his grade, which he worries is the beginning of the end, and vows he is done helping the football team. Tam is deflated at the prospect of losing his newfound popularity.

Back home, Sheldon realizes there is only one way to extricate himself from this situation, with his father, grandmother and school depending on him; he must tattle to his mother. Later, Mary confronts Meemaw, George, Missy, Georgie and Tam about their effect on Sheldon’s grades.

As Georgie throws a ball in his bedroom, George says he’s got to go pick up some equipment for the team and asks Georgie if he wants to join him. When Georgie points out he’s grounded, his dad says he won’t tell if he doesn’t. After Georgie asks if Sheldon’s going, George says there is no way that “little snitch” is joining them. George concedes Sheldon probably won’t be helping him with the math anymore.

At the dinner table, Sheldon is working on his homework when Meemaw approaches him with questions about football. Sheldon says he might have to tell on her again, but he does eventually give her a tip for the game. Alas, Sheldon’s suggestion turned out to be wrong and Meemaw never asked for his advice again.

At a casino in Louisiana, Meemaw is having a rough streak on the slot machines when she is approached by a Vincent, who is wants his money. When her luck on the machine finally turns, she offers to give the guy a down payment in quarters and leaves him to scoop them up.