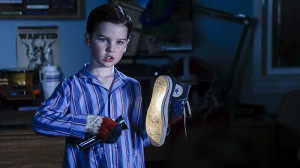 When George makes a deal with Sheldon to help Georgie prepare for an upcoming math test, Sheldon is the one who learns a surprising lesson from his brother.

Sheldon: Do you think a Spock could become a Kirk?
Meemaw: Well, in my experience, most people stay the miserable bastards they are their whole entire life. But I have seen some folks change.

Mary: Well, I'm gonna ask Jesus to help you get a good grade on that test.
Sheldon: Shouldn't you have asked him before he took it?
Mary: The man rose from the dead, I think he can fix a test after the fact.
Meemaw: You know, I hear you say things like that, and I wonder if maybe I did have a few too many whiskey sours when you were in my belly.

George Jr.: Oh, relax. By passing that test, I get to play football, and you get to go to the train store. Everybody wins.
Sheldon: But what about the truth?
George Jr.: What about it?
Sheldon: It's supposed to set us free.
George Jr.: Who told you that?
Sheldon: The Bible.
George Jr.: Since when do you care about what's in the Bible?
Sheldon: When it helps me win an argument.
George Jr.: The Bible also says honor thy father and thy mother. And if you open your mouth, you're gonna make them sad.

Adult Sheldon: The amends got worse when Coach Wilkins made me climb the rope. Lacking any upper body strength, I hung there like a salami in a deli window.

Adult Sheldon: Despite my explanation that I was embracing my inner Kirk, my mother had me make amends for all my misdeeds. Starting in the library, where I had to reshelve hundreds of books. Well, to be honest, that one was a hoot.

As Sheldon and Meemaw Star Trek in the living room, Sheldon says he identifies with Mr. Spock because he too is ashamed of his human side, while Meemaw is more interested in Captain Kirk because of William Shatner’s unique delivery. When George Sr. comes and asks Sheldon to help his brother study for his math test the next day as his place on the football team depends on it, Sheldon doesn’t think it’s a good use of his time. After Meemaw helps George sweeten his deal for Sheldon by saying he’ll take him to the train store, Sheldon reluctantly agrees. In his untidy room, Georgie says he doesn’t want Sheldon’s help, but their dad insists. When Sheldon realizes how little Georgie knows about algebra, he decides the $20 spending money offered by his dad won’t be enough.

In the kitchen, Sheldon and Georgie are working at the table as Sheldon tries to show his brother how to do algebra. Georgie doesn’t get it and Sheldon can’t understand why. Sheldon is surprised that not everybody “sees” the math like he does. Sheldon is ready to give up on the lost cause, but George raises his offer to $40. When he’s still not getting it, Georgie starts to wonder whether Sheldon is just a bad teacher. A while later, Georgie decides he’s had enough and is ready for bed, even if Sheldon isn’t finished teaching him yet. Adult Sheldon says he realized then that he was not cut out for teaching.

After Ms. Ingram hands out the math test to her class, Sheldon finishes it before she’s even stopped talking. Sheldon is told to read ahead in his textbook as the rest of the class take the test. Sheldon looks back to see a confused Georgie struggling to make sense of the test. At dinner that night, George Sr. asks Georgie how he did on the test. He says it was tough and he doesn’t know how well he did. George Sr. warns him there’s nothing he can do to help if he fails the test, he will be kicked off the team.

In Ms. Ingram’s class the next day, Sheldon hands out the test results. When he gets to Georgie, they are both surprised by the “B” grade, as is Ms. Ingram who doesn’t believe it either. Later, Sheldon and Tam help each other do sit-ups in gym class. When Sheldon says he needs to rethink his abilities as he is clearly a wonderful teacher, Tam reveals that he saw the answers to the test written on Georgie’s shoe. A shocked Sheldon is unable to believe his brother cheated on a test, and also unable to do a single sit-up.

Late that night, Sheldon puts on his mittens and grabs a flashlight as he sneaks into Georgie’s room to look for evidence. As he finds exactly what he was looking for, he wakes Georgie up. When Sheldon hands him the shoe, Georgie spits and cleans off the answers that were written on the sole. Georgie argues it’s a win-win situation as he gets to play football and Sheldon gets to go to the train store. After Sheldon gets biblical and says the truth is supposed to set you free, Georgie points out that the Bible also requires you to honour thy father and mother, who Georgie says would be sad if Sheldon revealed his deception.

As Meemaw smokes on her porch, she hears Sheldon coming and quickly puts out her cigarette. Sheldon knows what she was doing and lectures her anyway. When she notices he’s got a new train but doesn’t seem too excited by it, Sheldon admits that Georgie cheated on the test and he’s feeling bad about it. Meemaw says she shouldn’t let it bother him much as there will always be people who play fast and loose with the rules, and Georgie’s one of them. Sheldon realizes that’s how Captain Kirk acts and he’s the one who usually saves the Enterprise. When Sheldon asks her if she thinks a Spock could become a Kirk, Meemaw says most people remain the same miserable people they’ve always been, but she has seen some people change. After Sheldon leaves to play with his new train, Meemaw gets another cigarette out but then decides to put it away.

Sheldon goes to see Georgie in his room to ask a favor:  he wants to know what his strategy was for cheating on the math test. As Georgie tells him how he deliberately didn’t get an “A” as it wouldn’t be believable, Sheldon is riveted by Georgie’s lesson on deception. In the living room, Mary is thrilled to overhear Sheldon and Georgie being friendly to each other.

As Sheldon and Tam eat lunch in the school library, Sheldon tells Tam he’ll need to find a new partner for P.E. class as he suffered a terrible injury and won’t be able to attend. Sheldon shows Tam the sick note he forged from his mother, stating he is suffering from a testicular hernia. Later, Sheldon gives the note to Assistant Coach Wilkins, who sympathizes with Sheldon’s condition. After he says he’ll see Sheldon again in 6-8 weeks, Sheldon limps out of the coaches’ office.

Emboldened by his faux hernia, Sheldon starts taking books out of the library without getting his card stamped. When he returns home, he hatches a plot to get Missy to relinquish control of the TV. As she watches A Pup Named Scooby-Doo, Sheldon sits down on the couch with a shovel and says he’s been fruitfully searching for money in Meemaw’s yard. After Missy borrows the shovel and rushes over to Meemaw’s house, Sheldon switches over to the Professor Proton show.

As George gets ready to leave his coach’s office at the end of the day, Assistant Coach Wilkins asks George how Sheldon is coping with his injury. When George doesn’t know what he’s talking about, he hands George the sick note Sheldon gave him. Back home in the kitchen, Mary is confused as she sees the sick note for the first time. When they realize Sheldon forged a letter, George is actually a little proud of him. After Mary asks Meemaw if she knows anything, she tries to tell Mary about the Star Trek test that Captain Kirk cheated on but she has trouble getting the name right.

In his room, Sheldon is writing a deceitful letter to Professor Proton in the hopes of meeting him as Mary, George and Meemaw come to confront him about the sick note. Sheldon says he was just trying to be more like Georgie, but Mary says they don’t even want Georgie to be like Georgie. Sheldon starts by saying how sorry he is as he scrunches up his draft letter to Professor Proton.

In the school library, Sheldon is busy reshelving the books to make amends for all his terrible misdeeds. Although he actually enjoyed the library task, things got worse when Coach Wilkins made him climb the rope. Finally, Sheldon had to apologize to Meemaw who was an unfortunate victim of his sister’s treasure hunt, when she stepped off her porch and fell into a hole.