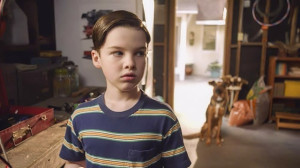 The Cooper and Sparks families go to war when the Sparks' new dog takes an interest in Sheldon.

Sheldon: How do we love our neighbors when our moms hate each other?
Billy Sparks: Who does your mom hate?
Sheldon: Your mom.
Billy Sparks: Hey, my mom hates your mom. Small world.

Adult Sheldon: In physics, nothing feels better than predicting an outcome. I love predictability. The force of gravity: predictable. Nuclear fusion: predictable. My brother peeing in the shower: repulsive, but predictable. What isn't predictable: dogs. I've always been terrified of dogs. To me, they're nothing but big, furry question marks. Question marks with teeth.

Brenda Sparks: Well, I'm sorry, but you shouldn't be inferring there's something wrong with my Billy.
Meemaw: Darlin', there's no inferring. I've seen the boy sitting in the dirt eating his own belly button lint.

On a beautiful Saturday morning in East Texas, Sheldon wakes up, gets dressed and does a scientific experiment in the garage. Meanwhile, when the front door bell rings, George answers the door to Herschel Sparks, who is looking for his family’s dog. As Sheldon cleans up in the garage, a dog comes in and sits on the floor behind him. When the dog barks, Sheldon turns around and tries to shout for help, only to find his voice has deserted him.

Elsewhere, George and Herschel are looking at the hole the dog chewed in the fence. Herschel says he’ll patch it and put some chicken wire along the bottom so the dog can’t get through again. In the kitchen, Mary asks a still shook up Sheldon why he didn’t call for help. After he says he tried but no sound came out, Meemaw offers him camomile tea to try calm his nerves.

In the living room, Meemaw is watching TV with George and Georgie when Mary comes in to say she finally got Sheldon to sleep after his earlier ordeal. Meemaw thinks having a dog living next door could be good for Sheldon as he might get used to animals. She suggests starting Sheldon out with a small pet and working up. Unfortunately Mary and George already know Sheldon’s objections to many comment pets. Meanwhile, when Sheldon wakes up to find the dog next to his bed, this time he shouts and sound comes out.

In the middle of the night, George takes the dog back around to the Sparks’ house. When Herschel answers the door, George explains that their dog got into their house. An agitated Brenda comes to see what’s going on. Herschel apologizes, promising to keep him tied up. Before George leaves, Mary runs over brandishing a bag which she says contains a dead squirrel that the dog dragged into their house. After Brenda questions whether their dog actually left the squirrel in their house or not, things get heated between Mary and Brenda. George wants to drop this for tonight, but the ladies keep bickering. When the squirrel in the bag starts moving, Mary drops the bag and quickly runs home.

In the kitchen the next morning, George is pouring a cup of coffee as Mary looks through the yellow pages for animal control. After Meemaw stops Mary from calling animal control, pointing out that they have to live next door to the Sparks, she offers to speak to Brenda and try smooth things out.

At the bowling alley, when Meemaw approaches Brenda at the shoe counter, she instantly complains about Mary being a pain her ass. After Brenda says she’s had a long night and doesn’t want to talk about it, Meemaw offers to buy her a drink and suggests she’s more on Brenda’s side than she thinks. Over margheritas, Meemaw thanks Brenda for being so kind to her family since they moved into the neighborhood. After Meemaw says Mary has a tough job raising three kids, one of whom is “special”, Brenda agrees. When Meemaw goes on to say things must be tough for Brenda with a kid who’s “special in his own way”. Brenda is offended and calls Sheldon the “weird” kid in the neighborhood. When Brenda says she shouldn’t be inferring Billy is weird, Meemaw says there’s no inferring. An insulted Brenda pours the margherita over Meemaw’s lap, which prompts Meemaw to throws her drink in Brenda’s face.

At dinner with the family, Mary can’t believe this is how her mother, who has a black eye, tried to patch things up with the Sparks family. Meemaw says Brenda got the worst of it as she ripped a big patch of hair out of her head. After seeing the trouble his fear of dogs has caused the family, Sheldon decides to do something about it. The next day in the school library, he asks Ms. Hutchins if she can recommend a book on overcoming phobias.

Back home, Sheldon reads the book alone in the living room. As the premise of the book is to take incremental steps towards confronting the fear, Sheldon starts by watching Scooby Doo. He then gets face-to-face with dogs, albeit through a glass window at the pet store. Finally, physical contact with a member of the canine species: Back home, Sheldon calls a veterinarian to ask if they have any sedated dogs he might pet. When Mary asks who he’s on the phone with, Sheldon admits it’s a vet and he’s trying to overcome his fear before it affects their family any further. Mary says he doesn’t have to worry about how it affects them. After the vet says no, Mary hangs up the phone when Sheldon asks if they have any recently deceased dogs he might see instead.

At Sunday School, Pastor Jeff is teaching the kids about Mark 12:31, which says you should "Love your neighbor as yourself". When Sheldon asks how they can love their neighbors when their moms hate each other, Billy Sparks points out that his mother doesn’t like Sheldon and Missy’s mother or grandmother. As Pastor Jeff asks them to stop discussing the feud, Billy admits his mother doesn’t really like the Pastor either.

At the Coopers’ home, Pastor Jeff sits Mary, Meemaw and Brenda down to say their quarreling has become a problem for their children so he has been forced to intervene. Brenda sparks accuses Mary and Meemaw of thinking they’re better than her, which Mary does not dispute. Pastor Jeff reminds them in all their actions to ask “What would Jesus do?” Pastor Jeff suggests that the women may have more in common than they think.

Meanwhile, Sheldon is dressed in protective gear as he leaves the garage and heads towards Bucky the dog to finally confront his fear and pet the dog. When Sheldon pets the dog, Bucky remains calm and responds positively. Sheldon proclaims he has conquered his phobia. Back inside, after Mary and Brenda apologize to each other, Meemaw reluctantly apologizes too. The quiet is broken when Sheldon runs in screaming that the dog licked his tongue.

Later, Mary asks Sheldon how it’s going as he gurgles in the bathroom. Sheldon says he’s okay, but they’ll need more Listerine. Back in the kitchen, George admits he’s proud of Sheldon for trying to overcome his dog phobia. After Meemaw is intrigued by why the dog is so drawn to Sheldon, George wonders what kind of fella the dog’s jailed owner is. At a prison somewhere, the dog’s owner is applying Brylcreem to his hair. As Sheldon applies the hair product to himself, Bucky the dog perks up in the Sparks’ garden.

When Meemaw visits Sheldon with a gift: a pet fish, he likes that it doesn’t even care that he’s there. Later, he tells Mary he’s going to call it Fish as he’s not ready to get attached. When Missy is disappointed that you can’t pet fish, Sheldon wonders if you can. Later, Sheldon goes screaming to his mother after touching his fish, disgusted by how so slimy it was and by the fact it bit him. George doesn't think the fish bit actually him, but Sheldon is sure the fish hates him. To allay Sheldon’s concerns, George puts his finger in the fish tank and unexpectedly gets bitten. When he pulls his finger out, the fish is still holding on to his skin. As he shakes it off, the fish falls to the ground. After insisting that the fish will be fine, George drops him back in the bowl, but he just sinks to the bottom.