119 - Gluons, Guacamole, and the Color Purple 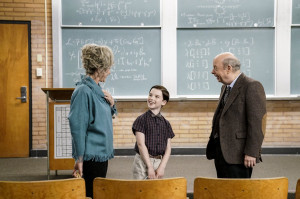 When Sheldon no longer feels he is being academically challenged at Medford High, he audits a college class taught by Dr. John Sturgis. Seeing the brilliant Dr. Sturgis in action gives Sheldon an idea to improve the academic make-up of his family.

Sheldon: I've been corresponding with Dr. John Sturgis at East Texas Tech. He said I could audit his course.
Meemaw: You're pen pals with a stranger? Is this okay?
Sheldon: He's not a stranger. He's a famous scientist. He carbon-dated the oldest human feces.
Meemaw: That ain't strange.

Meemaw: Okay, this is you. Good luck.
Sheldon: Aren't you going to walk me in and get me situated?
Meemaw: Oh, yes, of course. Right this way, my prince.

Sheldon: Did you know the word chauffeur is French for "stoker," because the first automobiles were steam-powered, and the driver had to stoke the engine?
Meemaw: Right there. Why am I driving you to college when you already know everything?

Mary: Now, Shelly, I appreciate that you want to expand your horizons, but how would you even get there? The school's an hour away. I'm working, your dad's working.
George Jr.: Again, who cares? Let him go.
Missy: He could hitchhike.
George Jr.: Perfect.

Meemaw: So, how was everybody's day?
Sheldon: I'm done with high school.
George Sr.: What does that mean?
Sheldon: Well, I don't learn anything there, and I don't want to go anymore.
Mary: Well, where do you think you're gonna go?
George Jr.: Who cares? Let him go.

In Ms. Ingram’s math class, Adult Sheldon explains that when his mind isn’t being challenged, it invents new situations to test him. In his fantasy, he is the only one who can fix a satellite that’s about to go into an uncontrolled spin. When Ms. Ingram notices that Sheldon isn’t paying attention, he’s fortunate that he knows what she’s talking about anyway. Convinced he wasn't daydreaming, she returns to teaching the class, while Sheldon returns to his fantasy and successfully saves the satellite.

At dinner, the family notices when Mary alters her prayer slightly, quickly making her regret that decision. After Meemaw asks how everybody’s day was, Sheldon says he’s done with high school. He doesn’t learn anything there so he doesn’t want to go any more. When Mary questions where he would go instead, Sheldon explains that he’s been corresponding with a Professor at East Texas Tech who said that Sheldon could audit his course. Mary wonders how Sheldon would get to class, so Sheldon suggests his Meemaw could take him as it’s only one day a week.

As she drives Sheldon to the college, Meemaw says she hopes one day Sheldon will make a lot of money and take care of her when she’s old. Sheldon says he’s not in science for the money. At the university, Meemaw finds the lecture hall and wants to drop Sheldon off, but he would prefer she walked him and got him situated. Once she gets him situated, she says she’ll be waiting right outside. Sheldon wonders if she wouldn’t prefer to stay and learn about the subject, but Meemaw says she doesn’t want to ruin the fun of him telling her all about it on the way home.

Back home, Georgie is watching Rocky TV when Missy comes to say she’s struggling with her homework. Georgie can’t believe she’s asking him as he can hardly do his own home work. Georgie admits he’s ain’t great with grammar and, when he takes a look at Missy’s textbook, they’re both confused. Georgie declares that he can’t help Missy, so she gets up to walk away. After Missy mentions that she wonders whether they’re stupid or just look like it next to Sheldon, Georgie has a change of heart and agrees to help his sister.

As Meemaw knits outside the lecture hall, a man approaches her to ask about her pattern. When he mentions that he has a class to teach, Meemaw realizes he must be her grandson’s pen pal. She explains that she’s Sheldon Cooper’s grandmother and he’s waiting in the class for Dr. Sturgiss. After he asks if she’ll be joining them in the class, Meemaw questions whether they’ll be discussing quantum chromodynamics. Hearing that they probably will be, Meemaw passes on the opportunity. Dr. Sturgis reminds her that every day is a chance to learn something new and he would welcome any questions she has, so Meemaw changes her mind.

Meemaw is excited to hear Sheldon enjoyed the class. When Dr. Sturgis asks him what he thought of his first theoretical physics class, Sheldon says he thinks this is what he’s going to do for the rest of his life. When Dr. Sturgis tells Meemaw he would like to see her for dinner some time, an excited Sheldon instantly accepts on her behalf.

Back home, Georgie is successfully helping Missy with her homework as they both get the hang of complete sentences. Later that night, as Mary tucks Sheldon into bed, she tells him he may be getting a little ahead of himself by thinking Meemaw has fallen in love with Dr. Sturgis. Meanwhile, George Sr. asks Meemaw whether she understand any of the class, she says not a word. When Mary returns to the kitchen, she tells her mother that Sheldon’s fired up and noticed something between her and Dr. Sturgis. Meemaw reveals that he asked her out to dinner and, as she never turns down a free meal, will be taking him up on his offer.

As Meemaw applies her make-up, Sheldon is standing behind her, warning her not to overdo it. When the doorbell rings, an excited Sheldon rushes down to welcome Dr. Sturgis. As John admires the house, Sheldon mentions he could see him living there. Before Meemaw comes down, Sheldon coaches Dr. Sturgis on some of her favorite things. When Meemaw comes down, Dr. Sturgis gives her flowers and mentions some of them are her favorite color, purple. After Sheldon offers to put the flowers into water, Meemaw tells him to go home.

When Meemaw goes to take care of the flowers before they head out, Dr. Sturgis says he  needs to borrow her phone to call a taxi. John admits he doesn’t drive and rode his Schwinn bicycle over to her house. Instead of a taxi, Meemaw suggests they take her car instead. Back home, Missy knocks on Georgie’s door and slips a note through. It’s her graded English homework, for which she answered every question correctly. Missy wonders if Georgie cried when he saw it. Although he denies tearing up, Georgie does hangs it on his wall.

At the Mexican restaurant, Meemaw asks Dr. Sturgis if he likes guacamole. Being from Maine, he hasn’t had much Mexican food. He doesn’t like the idea of it being made at the table either, but he wants Meemaw to have what she enjoys and so he’s willing to take the risk. When he mentions that he likes to take a gamble like she does, Meemaw realizes Sheldon filled him with information on her.

As Sheldon looks out of the window toward Meemaw’s house, Mary tells him to go to bed as they won’t be back for a while. Sheldon says he won’t be able to sleep, but Mary just wants him to go to bed. Back at the restaurant, Meemaw asks John if he’s ever been married. He reveals that he hasn’t, but he has been in love seven times. After he is more than candid about his past break-ups, Meemaw leaves open the chance of a second date. She encourages him to try the guacamole.

The next morning, Meemaw is woken up at 6:15 by Sheldon, standing next to her bed, asking how the date went. She sends him away without any information.

Later that morning, in the kitchen, Mary asks her mother if she plans on seeing John again. Meemaw admits that despite all his eccentricities, there was something about him; she’s never met anybody like him. When George says it sounds like Sheldon, Meemaw is horrified he would put that thought in her mind. After Mary urges her mother to give him another try, Sheldon pops up to agree. When Meemaw returns home, there’s a purple bike just like Dr. Sturgis’s on her porch with a note saying he would love to see her again. Despite her initial concern, she is clearly touched by the measure.

Back in Dr. Sturgis’ class, Sheldon and Meemaw are once again sitting in the front row. When Dr. Sturgis catches Meemaw’s gaze, he loses his train of thought and gets stuck in a loop. Seeing this could disrupt his learning, Sheldon tells Meemaw she needs to leave. Later, Dr. Sturgis sees Sheldon has lost focus in class. He is deep in another fantasy about a failing satellite, this time featuring Dr. Sturgis. After John questions whether Sheldon is paying attention, Sheldon admits he already knows this material, but encourages him to keep going for the benefit of everyone else.