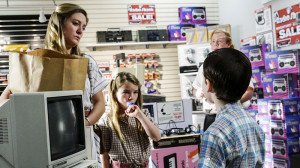 When Sheldon asks for a home computer, Mary and George disagree over whether the family can afford the expense.

George Jr.: What are you doing?
George Sr.: Separating the whites from the colors.
George Jr.: Whoa, that's racist.

Meemaw: I could buy it for him, and then y'all could pay me back when you can.
George Sr.: Okay, Connie, now you're just insulting me.
Meemaw: Well, that was not my intention, but I'm glad to hear it.

George Jr.: I'll get it! [answering the phone suavely] Hello, Georgie speaking.
Missy: Did you run to the phone? Do you feel stupid?

Adult Sheldon: Power has always been a deadly narcotic, and in 1989, RadioShack's Tandy 1000 SL was my drug of choice. With an Intel 8086 running at eight megahertz and a five-and-a-quarter-inch floppy drive, there was nothing I couldn't do. From adding snazzy graphics to my homework-
Sheldon: So snazzy.
Adult Sheldon: To easily alphabetizing my list of enemies and their crimes.
Sheldon: So easy.

Sheldon is trying out the Tandy 1000SL home computer at RadioShack when Mary arrives with Missy to say it’s time to go. Missy has just been given a ten-cent Ring Pop by her mother. After Sheldon tells his mother they really need to get a computer, detailing how it could help her track expenses or organize her recipes, Mary says they can’t afford a computer and have to go home now.

Back home, George, Mary, Georgie and Meemaw watching TV when a RadioShack commercial for the Tandy 1000 comes on. Mary mentions that Sheldon was going on and on about it earlier, and now wants a computer more than ever. George thinks if Sheldon wants a computer he should get a job, saying he hopes Mary told Sheldon they can’t afford to buy a computer. When Meemaw offers to buy it and have them pay her back whenever they can, George is insulted and insists he can take care of his family. After Mary says there are expenses they could cut back on, George wonders if it includes all the money she gives to the church. Mary was actually thinking more about all the money George spends on beer. George is adamant they’re not getting a computer and don’t need Meemaw’s money.

Later that night, when Mary checks on Sheldon and Missy in bed, Sheldon starts talking. Mary realizes he’s having a dream and assures him there’s nothing to worry about. Before she leaves, she makes sure to remove Missy’s Ring Pop from her mouth.

Back in their room, George is working on his playbook as Mary gets ready for bed. George can tell by the tension that their “once-a-week” is in doubt. George tells Mary she knows how he feels about her mother meddling in their finances, but Mary argues it was a genuine offer of help and the computer is really important. George asserts they can’t afford it, end of story. When Mary says she’s been setting money aside for the last couple of years and this might be a good use for it, George is surprised to hear about her “secret” money. He is annoyed that Mary has money he didn’t know about when she knows about every penny he earns. Turning over to go to sleep, George says he’s happy they’re not having their once-a-week ‘cause he’s not in the mood. When Mary offers the tantalising prospect that she actually is in the mood, George asks “Really?” and is disappointed by her forthright answer.

The next evening,  as Mary serves up dinner for the kids, Missy tells Georgie a girl called for him. Unfortunately for him, Missy doesn’t remember her name or what she she said as it was months ago. When George arrives home with two cases of beer, Mary is outraged. She tells the kids to finish their dinner and then pack a bag as they are going to go stay at Meemaw’s. When Georgie doesn’t want to go in case the girl calls back, Mary says he can stay here with his father. Sheldon worries about what to pack.

After Meemaw’s doorbell rings, she somewhat reluctantly welcome Mary and the kids to her home. Mary struggles to help Sheldon carry his massive and heavy suitcase, packed with “everything”, up the stairs.

Back home, Georgie and his father are watching football on TV when Georgie says he’s never getting married as women are nothing but trouble. Still, when the phone rings and he thinks it might be the girl calling back, he rushes to answer the call. Lamentably, it’s only Missy playing a joke on him. George tells him this little tiff between his parents will blow over and there’s no need to make a big deal about it. Georgie says he’s not, he jus thinks he’s just better suited to the single life. Unconvinced, George Sr. bets that Georgie will be married by the time he’s 25. Adult Sheldon says he married for the first time at 19 and never paid his father.

Over at Meemaw’s house, she and Mary are putting Sheldon and Missy to sleep in a double bed when Missy asks if her parents are getting a divorce. Mary insists they are not, despite how it might look. After their mother and grandmother leave, Missy can’t believe their parents had a fight over beer. Sheldon suggests there’s more subtext to their disagreement than that.

As Mary and Meemaw climb into bed together, Meemaw asks Mary when she’s leaving, saying she likes having them across the street, not in the same house. When Mary apologizes if the breakup of her marriage is inconveniencing her mother, Meemaw tells her not to be so dramatic as it’s only a little spat. Mary argues this has been building for a long time, arguing that George was threatened by her having her own money as it meant she could live independent of him. Mary says she’s got to buy Sheldon the computer now. To make sure Mary doesn’t get too comfortable Meemaw points out that she still has an active sex life in that very bed.

The next morning at the Cooper household, an unshaven George is glumly reading the newspaper with a cup of coffee when Georgie asks what’s for breakfast. George tells him to grab a bowl of cereal, but Georgie points out the hot breakfast his mother usually makes them. After his father is snappy to him, Georgie suggests his father should go across the street and apologize. George doesn’t want to say sorry as it would set a bad precedent. Mystified by his son’s rambling about Nixon, George gets up and walks out of the kitchen.

When Georgie tracks Sheldon down at school by his locker, Georgie blames Sheldon for their parents’ argument. Georgie says they’re fighting over getting him a computer, and as a result he had to make his own bagged lunch. Sheldon says he didn’t know that was the cause of the disagreement. When they compare their bagged lunches, it’s clear Sheldon got a much nicer lunch from his mother.

In the car on the way back from a shop, Missy tells Mary she loves the plastic pony she just got her. She’s even happier that Sheldon didn’t get anything. When Mary says that they’re not exactly done shopping yet, she asks Sheldon if he still wants that computer. After Mary dismisses Sheldon’s concerns that they can’t afford it, he says he wants the computer more than ever. Missy is now unhappy that Sheldon gets a computer and all she got was a lousy toy.

Back at home, Georgie is looking inside the machine to see where the water comes out. Unfortunately, he’s looking at the dryer. As George separates a load of laundry into whites and colors, he is again stunned by his son’s comments. Meanwhile, Sheldon is unboxing his new computer over at Meemaw’s. When the computer is set up, he decides to use an early example of a chat-bot, ELIZA, to try solve his family problems. Sheldon tries to tell the bot about the argument between his mother and father, but the program proves rather unintelligent. Meemaw observes as Sheldon tells the computer about his parents’ problems.

Over at the Coopers’, Georgie and his dad are struggling to get the washing machine to work. They’re at a loss as the water is definitely on, but the machine won’t start. Georgie tells his father he knows what to do: go across the street and apologize to mom. George says he has nothing to apologize for and wants his son to mind his own business.

As Meemaw carries her own basket of laundry, Mary is busy reading the manual for the home computer. She thinks it’s amazing what the machine can do; she could even start a proper bookkeeping business with the thing. After Meemaw tells Mary that Sheldon was using the computer to try fix his parents’ marriage, Meemaw tells her it’s time to get out of her house. When Mary asks if she thinks she should apologize to George, Meemaw says that would set a bad precedent. Instead, she should go home to get some clothing for the kids and be cold to George so he’ll feel like he has to apologize.

As Mary leaves Meemaw’s house to cross the street to her home, George is walking across to see her. When they meet in the middle of the road, he asks if she was coming back home. Mary says yes but only to get clothes for the kids. When she asks George if he was coming to talk to her, he eventually says he was coming over to apologize. He asks if she wants to go for a walk to talk things over. After Mary agrees, they walk off together holding hands. Back inside, Meemaw calls Sheldon and Missy to the window to see their parents talking to each other again. The kids realize things are going to be okay and they’ll be returning home.

With the computer set up back at home, Sheldon shows off its functions to his mom and dad. Later, the whole family tries out the computer. Georgie has fun “flirting” with ELIZA. Missy is playing a Wheel of Fortune game when she should be going to bed. Meemaw struggles to understand how to use the computer, talking to the mouse and listening for its response.

When George observes Mary as she puts a load of laundry on, he sees her pull out the button after selecting the desired program.