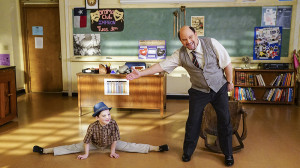 When Sheldon doesn't win the school science fair, he decides to stop pursuing science and seek a new focus in life.

George Sr.: You don't always win in life, he needs to learn that.
Mary: I know, but these are big feelings for a little boy.
George Sr.: They're feelings everybody has. It's part of growing up.
Mary: I guess.
Sheldon: Poodle poop!
Meemaw: Okay. Somebody's got to teach this kid to swear, it's embarrassing.

Sheldon: Attention, students and faculty. This is Sheldon Lee Cooper. We're taught that hard work pays off, but that's not true. I came up with a solution to save Earth from killer asteroids, and lost the science fair to SueAnn Ludlow, and her frizzy hair machine. But it wasn't just me who lost, we all lost. Wake up, people. The system's broken. Real innovation isn't valued. Nowadays, it's all about flash and style.
I blame MTV. Luckily, my parents can't afford cable. I urge you all to rise up. They can't send everyone to the principal's office. Chew gum in class, use a number one pencil, go nuts. This is Sheldon Lee Cooper signing off. Live long and prosper.

Principal Petersen: And the winner of the Medford High School Science Fair is SueAnn Ludlow!
Sheldon: You've got to be kidding me!
Mary: Shelly.
Sheldon: You people are crazy!
George Sr.: Hey. All right.
Sheldon: You're celebrating mediocrity. Mediocrity! Mediocrity!

Sheldon: I'll be in my room.
Mary: Oh, come on, Shelly. You still got an honorable mention.
Sheldon: Stop reminding me.

Mary: I hate to see him so upset.
George Sr.: Well, give him a little time, he'll calm down.
Sheldon: [door slams] Fiddle-faddle!
Meemaw: The F word. He's real mad.

At the school science fair, Sheldon has prepared a display the danger posed to humanity by asteroids. Other demonstrations at the science fair include Georgie was showcasing how loud various drinks make him burp and a girl demonstrating the effects of a Van de Graaff generator on her hair. When the girl wins the fair, Sheldon is outraged and accuses them of celebrating mediocrity. As Sheldon screams about the injustice, George carries him out of the gymnasium.

When the family arrives home, Sheldon tells them he’ll be in his room. Mary is upset to see him so mad, but George thinks he needs to learn that you don’t always win in life. Mary worries that those are big emotions for a little boy, but she reluctantly agrees. Meemaw, on the other hand, is more worried about Sheldon’s G-rated swearing.

In his room, Sheldon is sitting on his bed with this “Honorable Mention” ribbon when his dad comes to talk to him. George tells Sheldon he knows losing isn’t easy as he deals with it on the football field all the time. When George finishes his story about a difficult game he faced last year, Sheldon admits he hasn’t heard a word his father has said.

At dinner that night, Meemaw can’t believe that Mary sent Sheldon to bed without his dinner and on spaghetti and hot dog night, as well. George says Sheldon’s got to learn. When Mary changes the subject and asks Georgie how his day was, Georgie is upset that Sheldon told the whole school they can’t afford cable. Missy’s day was good until she found that out. When Sheldon comes to the table to tell them there’s something he’d like to say, George doesn’t want to hear it unless it’s an apology. Sheldon says he’s quitting science.

In the kitchen, George is drinking a beer as Meemaw and Mary cleanup. Mary admits she’s really worried about Sheldon acting out and quitting science, admitting that she’s wondering whether Sheldon should talk to somebody. When George says “Not it”, Mary tells him she meant a professional.

At the psychiatrist’s office, Meemaw and Mary sit with Sheldon as they wait for Dr. Goetsch. When he comes out, Sheldon is unhappy at being called his “main man” and asked to chit chat. Inside the doctor’s office, Dr. Goetsch talks about Sheldon changing his mind on being a scientist, saying he thinks it’s great and that Sheldon should keep his options open. When Sheldon and the doctor emerge, Sheldon says he feels a lot better but admits he is not returning to science. Sheldon says he’s going as far away as science as possible by pursuing the arts.

At home in the garden, George is preparing the barbecue as Mary brings out the meat, while Missy and Meemaw sit at a lawn table. When George wonders why Sheldon wants to try acting, Mary says the psychiatrist encouraged him to try something different. Meemaw mentions that she once starred in a community theatre production of “Oklahoma”. As Meemaw discusses her risque part and her belief that theater is just an excuse for people to change in front of one another, Mary and George grow irritated at the suggestive nature of what she’s telling Missy.

At school, Sheldon goes to Mr. Lundy, the head of the drama department, to say he’s interested in becoming an actor. Mr. Lundy takes a shine to Sheldon, even though he recognizes he’s an odd boy. Mr. Lundy tells him auditions are next week and he’s welcome to come on by. Back home, Sheldon tries to master acting by immersing himself in all forms of the genre from silent films to modern classic and musicals. Later, as Georgie watches a football game, Sheldon is reading “An Actor Prepares”. Following an exercise in the book, he pretends to be looking for his missing brooch. After Georgie believes him, Sheldon declares he’s done it and is now an actor.

At the auditions, Mr. Lundy tells Sheldon the stage is his. After some prodding, Mr. Lundy tells Sheldon to break and a leg, so Sheldon delivers his monologue from King Lear. Mr. Lundy is blown away by his performance. Sheldon then demonstrates his singing talent with a song from Evita, and finally his tap dancing skills. Later, when Meemaw returns home with Sheldon, Mary asks how the audition went. After Sheldon says he got the lead, his parents can’t believe it; especially when he reveals that the play is "Annie". As Sheldon learns his lines in his bedroom, George goes to talk to him about the play. After George tells him people will make fun of him if he appears in a play as a girl, Sheldon insists he wants to do this and that Mr. Lundy said he was the best person for the role.

Three weeks later, George is driving the whole family, minus Sheldon, to see the play. When Meemaw asks who’s excited, Georgie says he doesn’t want to see Sheldon’s stupid play as it’s humiliating. But that’s exactly why Missy wants to go. Mary tells them they are going to support their brother and she won’t hear another word about it. That includes George asking if they can at least sit in the back. At least Meemaw is excited.

Backstage, Mr. Lundy tells the cast there’s ten minutes until curtain time. Mr. Lundy goes to see how Sheldon, in his costume and make-up as Annie, is doing. Sheldon thinks he’s in touch with his inner Annie. When Mr. Lundy mentions it’s a packed house, Sheldon goes over to the curtain to have a look out into the audience. Seeing all the people, his heart starts racing. After Sheldon tells Mr. Lundy he can’t do this, Mr. Lundy thinks it’s just stage fright, but Sheldon says it’s a full-blown panic attack. Mr Lundy tries to calm his nerves, telling him he won’t be alone on stage as there’s a whole cast up there working as a team to protect each other. Mr. Lundy tells Sheldon he’s a star and the audience deserves to see him shine.

As the curtain opens, Adult Sheldon says Mr. Lundy gave a compelling speech. But when the titular character finally appears in the school’s production of "Annie", it’s Mr. Lundy who has donned the red wig. In the audience, Georgie is relieved while the rest of Sheldon’s family is puzzled. As the show drags on with Mr. Lundy singing “Tomorrow”, George and Georgie get restless in the audience.