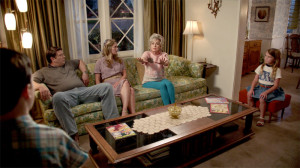 When Meemaw refuses to share her brisket recipe with George Sr., the kids worry the family feud might harm their parents' marriage.

Sheldon: How come Georgie's not going?
Mary: He's grounded for eavesdropping on me and your father.
Missy: Well, I hope he learned his lesson.

Sheldon: You were there. Don't you remember?
Missy: [SIGHS] I got nothing.

[Missy outside her parents' bedroom eavesdropping on their conversation]
George Sr.: Like I'm some kind of loser, a booby prize.
Missy: Booby prize.
Mary: What was that? [Missy runs away and knocks on Georgie's door, he comes out just as Mary opens her door] Georgie, you mind your own business.
George Jr.: What did I do?

Meemaw: I tell you what. You go get a piece of paper and a pencil, I'll write it down for you.
George Sr.: Okay. It's happening!
Mary: That's the fastest I've seen him run.
Sheldon: It's the only time I've seen him run.

Sheldon: What's going on?
Missy: Mom and Dad are fighting.
Sheldon: What about?
Missy: Brisket. If they get a divorce, who do you think you'll pick to live with?
Sheldon: Well, Mom, of course.
Missy: I want Mom. Pick again.

After Meemaw serves up her famous brisket for the family, George mentions that one of these days she’ll have to tell him her recipe. When he explains how much it means to him, Meemaw tells him to grab a pencil and a piece of paper and she’ll finally reveal the recipe. Unfortunately for George, Meemaw just writes a sarcastic note. Mary tries to change the topic to the church picnic, but when Meemaw mentions she’ll be making her brisket for the event, George flips out about her not sharing her recipe. Meemaw relents and agrees to write it down for proper this time, but Mary expects that she is just going to trick him again.

That night, as Missy leaves the bathroom on her way to bed, she overhears her parents talking about Meemaw making a fool of George, who thinks Mary is siding with her mother. When Missy overhears George refer to himself as a “booby prize”, she repeats the phrase out loud and her parents hear, prompting them to wonder who’s listening to their conversation. As Missy rushes to her bedroom she knocks on Georgie’s door, so he opens his door just as Mary comes out of her bedroom, telling him to stop eavesdropping. After Missy returns to her and Sheldon’s bedroom, she tells him their parents are fighting over brisket.

As Mary drives Missy, Sheldon and Meemaw to the church picnic, Missy wonders why her dad isn’t there, too. Mary is evasive about why he didn’t come, saying he had work to do. When Sheldon wonders why Georgie isn’t there, Mary explains that he’s grounded for eavesdropping on her and George. After Meemaw realizes that George’s absence is related to her refusing to give him the brisket recipe, Sheldon worries that his parents will get a divorce but Mary insists that’s not happening. Mary tells her mother that this would all go away if she would just share her recipe, but Meemaw says it’s not going away.

Back home, Georgie tells his dad he wasn’t eavesdropping on them, but George says not to worry about it, especially since he didn’t want to go to the church picnic in the first place. After George puts his beer down and says he’ll be right back, he rushes over to Meemaw’s house and enters her kitchen looking for her brisket recipe. After Georgie follows his dad and figures out what he’s doing, they search for Meemaw’s recipe without success. Later, George Sr. and Jr. are back watching TV when the family returns home. George tells his son to act cool, but has trouble doing so himself. Elsewhere, Meemaw arrives back home and notices her recipe boxes are not how she left them, realizing George was searching through them for her brisket recipe. She can’t believe that “dope” thought she would actually write the recipe down.

As George watches TV in the den, he asks Mary if she needs help putting the kids to bed. Mary says she’s been taking care of them by herself all day, so she can finish the job as well. After Mary tells him that he missed Sheldon and Missy winning the three-legged race, George apologizes, saying he needed a break from her mother.

Later that night, Meemaw finds George Sr. working on his coaching playbook in the garden. When Meemaw offers him the recipe, George doesn’t believe her at first, but she says seeing him skip the picnic hurt the children and she doesn’t want that on her heart. George is so delighted he doesn’t know what to say to her, other than “Thanks, Mom”. As Meemaw walks away, she remarks “What a dope.”

As George sets out on a doomed quest to make the perfect brisket from Meemaw’s recipe, he visits the butcher and makes a fool of himself by asking for a ridiculously specific cut of meat. He then crosses state lines to get expensive coffee and a bizarre spice from a voodoo woman in New Orleans. He returns home to tenderly rub the spice mix into the meat ahead of 14 hours of cooking, basting, spritzing, and tending to the fire. The next day, Meemaw is drinking the expensive coffee as the kids eat dinner. When George finally tastes the brisket, he knows right away it’s not Meemaw’s famed recipe. After he confronts Connie, George says he doesn’t want her in his house anymore.

As he plays with his train set in the garage, Georgie and Missy come to talk to Sheldon. They are worried that the feud between their dad and Meemaw might lead their parents to get a divorce. Georgie thinks if they can give their dad Meemaw’s recipe this will all go away, but Sheldon doesn’t think they will be able to do that. That is, until a comment from Missy sparks a memory of Meemaw telling Sheldon her recipe when he was 23 months old. Although Sheldon thinks he owes it to Meemaw not to share something she told him in confidence, Georgie implores him to reveal the recipe for the sake of their parents’ marriage.

After Sheldon goes to his dad in his den to ask him to come into the living room, George is surprised to find the whole family, including Meemaw, gathered there. Sheldon explains that he knows Meemaw’s brisket recipe and is prepared to make it public to bring peace to the family. Meemaw thinks he’s bluffing until he starts rattling off her secret ingredients. Realizing that Sheldon does know the recipe, Meemaw relents and says he can give it to his father. George claims he doesn’t want it now, admitting that what he really wants from Meemaw is for her to stop treating him like an outsider. Meemaw admits she didn’t think George was good enough for her daughter, but he argues he has changed a lot since they first met. After Meemaw apologizes, George says it means more to him than any recipe. Still, Adult Sheldon points out that as soon as Meemaw left, his dad asked him for the recipe.

In the kitchen, George serves up his first attempt at Meemaw’s brisket as Sheldon works on his homework. When George articulates his pleasure as he eats his cooking, Sheldon has another flashback to a rather more inappropriate incident involving his parents.