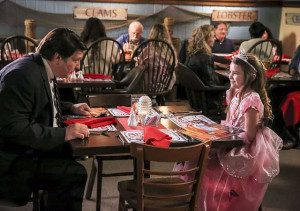 As Sheldon is forced to watch Dr. John Sturgis's budding relationship with Meemaw from a distance, George Sr. and Mary take the opportunity to bond with their other children.

When Sheldon goes to Meemaw's house to ask about her date with Dr. John Sturgis, he performs his characteristic knock on her front door. Sheldon knocks three times and calls out for Meemaw, and he does two rounds of this.

Meemaw: This is delicious, but you were not kidding about the spice. I'm about to break a sweat here.
Dr. John Sturgis: Well, here's something you might find interesting. Spicy food is typically found in warmer climates because it induces sweating, which in turn, cools people off.
Meemaw: So what does the runny nose do for me?
Dr. John Sturgis: It allows me to, uh, gallantly offer you my handkerchief.
Meemaw: You are such a gentleman.
Dr. John Sturgis: When I was younger, I read a book on etiquette. That's how I know that if I ever have an audience at the Vatican, I should wear evening attire or a sack coat.
Meemaw: I don't know what a sack coat is, but I'm sure you'd look handsome in it.
Dr. John Sturgis: Thank you.

George Jr.: Don't they make babies that are born too soon stay in the hospital?
Mary: Normally, yes, but you were born with such a great head full of hair that they sent you home with us.
George Jr.: That's the first thing you've said that makes sense.

Mary: Sheldon?
Sheldon: Dr. Sturgis, welcome.
Dr. John Sturgis: Thank you, Sheldon.
Mary: Sheldon, you think you might've let me know you invited company over for dinner?
Sheldon: I did think about it, but I was afraid you might say no.

As Mary gets ready to serve up a dinner of spaghetti with hot dogs cut up in it, the doorbell rings. When Mary answers the door, it’s Dr. John Sturgis, who says Sheldon invited him to dinner. After Mary invites him in, she calls Sheldon to explain. Sheldon admits he thought about asking Mary but was worried she would say no. Sheldon then asks Dr. John Sturgis to come see his train set.

As George and Mary set out plates at the dinner table, a wet Meemaw arrives still in the process of putting on her make-up. She can’t believe John just showed up out of nowhere and admits she had been busy doing water aerobics at the YMCA before she got the call. Out in the garage, Sheldon is showing his train set to Dr. Sturgis when Meemaw arrives to say what a pleasant surprise it is to see him. She asks if they’re ready for dinner and leads them into the house.

Back inside, Georgie and Missy are eating at the table in the kitchen while Sheldon joins the adults in the dining room. When George asks Dr. Sturgis about his job, he mentions that he’s only at the university temporarily but could be enticed to stay. Sheldon makes sure Meemaw picks up on the subtext. Meanwhile, Georgie is upset about being relegated to the kiddy table. Missy argues it’s better as they don’t need to pray or eat their vegetables, and they can curse there. As Sheldon dominates the conversation with Dr. Sturgis, Mary suggests giving him a chance to talk to Meemaw. John is only interested in why she smells like chlorine.

Later that night, George asks Dr. Sturgis if he’s sure he doesn’t want a ride home. John says no as he would prefer to breathe in the night air and burn off the meal on his cycle home. When Mary says it was nice spending the evening with Dr. Sturgis, he says they should do it  again sometime. Sheldon tries to set up another date for the following night, Meemaw jumps in to say they’ll figure it out later. After Meemaw leads John outside, Sheldon says it was the most stimulating dinner he’s ever had in the house. Sheldon remarks that Dr. Sturgis is the ideal male role model for him.

As they climb into bed, Mary asks George if he’s going to keep it all bottled up or if he wants to talk about it. George insists there’s nothing to talk about as he kisses her good night and turns the light off. When Mary says she knows he wants to talk about it, George says his own son can’t imagine him being a role model. Mary points out he’s a role model for Georgie, but  he worries that his son is now more interested in growing up to be Tony Danza. Mary reminds George he also has a daughter who would appreciate spending some time with her father.

The next day, Sheldon walks up Meemaw’s path and knocks on the door. When Meemaw answers, Sheldon says he’s been researching things she and he could do with Dr. Sturgis, including a lecture that night. Meemaw warns him she and John won’t be able to have a relationship if Sheldon is always underfoot, before telling him to go home and eat his breakfast.

Back home, Sheldon is repeating what Meemaw said on the telephone to Dr. Sturgis. Meanwhile, as Missy plays with her dolls and stuffed animals, George goes into her room to ask what she’s doing. Missy worries she’s in trouble, but he says he’s just checking in on her. George says he was thinking they don’t spend enough time together, so he thinks they should do something just the two of them. When he asks her what sounds fun, Missy says she’d like to be taken to dinner, to the fanciest restaurant in all of Texas: Red Lobster. After George agrees, Missy is excited and runs out to see her mother so she can buy a dress for the occasion.

When Meemaw’s phone rings, she answers and finds it’s Dr. John Sturgis. After he says he would like to have dinner with her tonight, just the two of them, Meemaw says that sounds nice and asks what he had in mind. John says he’d like to go to her house and cook her a Sichuan feast, which Meemaw thinks sounds great. When she sets a time for the date, John mentions not telling Sheldon so he won’t be “underfoot”. Meemaw instantly asks if he’s been talking to Sheldon and, without any hesitation, John cheerily admits he has.

At home, George is adjusting his tie and wondering if he really needs to get this dressed up for Red Lobster. Mary insists he does as he’s getting dressed up for his daughter. Mary gets excited as she sees Missy come out in her princes dress, complete with tiara and wand, and encourages George to compliment her outfit as well. In an attempt to be grown-up for the evening, Missy refers to her dad as George and asks him to call her Melissa.

With a wok strapped to his back, Dr. John Sturgis bicycles to Meemaw’s house. When he pulls up outside her house, he looks over the street to Sheldon, who’s watching through binoculars, and gives him a thumbs up. When John reaches the front door, Meemaw welcomes him in. Across the street, Mary finds Sheldon staring out the window with his binoculars. When she asks him to come to the kitchen for dinner, Sheldon asks if he can eat out there so he can observe Dr. Sturgis’s date with Meemaw. Mary reluctantly agrees.

Missy looks around excitedly as she and her dad walk into Red Lobster for their meal. After George asks for a table for two, Missy is impressed when the waiter leads them to a table and pulls out her seat out for her. Missy takes a menu and is delighted when the waiter politely drops a napkin on her lap for her. When her dad asks what she thinks, Missy says they may even be underdressed.

In Meemaw’s kitchen, she’s drinking a glass of wine as John tends to the wok. After she asks him what he was doing walking around China, he says he prefers to take the path less traveled. When Meemaw wonders if it was a bicycle path, John admits he enjoyed that everyone in China everyone rode a bicycle. As John hands Meemaw some food to taste, Sheldon is still watching them from across the street.

When Georgie asks his mother why he can’t eat watching TV when it’s only the two of them in the kitchen, Mary says it’s a chance for them to talk. Mary asks him about school but he doesn’t have much to say. When Georgie wonders if he can ask her a question, Mary agrees and he goes on to ask if she was pregnant with him when she married his dad. Sheldon had done the math and found out there were only six months between his parents wedding and Georgie’s birthday. An embarrassed Mary is forced to lie and say he was premature -  a big, fat nine-pound premie - as she struggles to change the subject. Meanwhile, at Red Lobster, Missy is filling George in on the drama between two of her friends, both named Heather.

As they eat the dinner he prepared, Meemaw tells Dr. John Sturgis the food is delicious, but she’s finding it very spicy and is about to break a sweat. After Meemaw tells him it’s a long bike ride home, she says he’s welcome to stay if he wants. When John completely misses the subtext, Meemaw comes right out and says she’s inviting him to spend the night. When John simply says “No, thank you”, Meemaw shudders and takes a big gulp of her wine.

When Georgie wonders why he didn’t have to spend time in the hospital if he was born premature, a desperate Mary says he was born with such a great head of hair that they sent him home with them. Georgie buys it and says he’s glad they had dinner together. A red-faced Mary politely agrees. When Georgie runs off to catch the latest episode of Who’s The Boss?, Mary prays and apologizes for lying, promising to tell Georgie the truth when he’s thirty.

When the waiter serves Missy’s lobsters, she is alarmed by its face staring right back at her. George gets up and sits down next to her to show her how to eat lobster. When she finally gets a taste, Missy thinks it’s unbelievably good. When George gets up and says he’ll leave her to it, Missy asks him to stay there and sit with her.

As they clean up Meemaw’s kitchen, John asks Meemaw why she’s being quiet. When she asks if he’s actually interested in her, he says he’s very interested. Meemaw can’t understand why he turned down the opportunity to spend the night. After he realizes he did reject her, John says he didn’t want her to think he thought she was the type of woman would have coitus with someone just for cooking her a Sichuan dinner. Seeing he wasn’t making things better, John tries a different tack and gets down on one knee to ask if she would honor him with a night of intimate relations.

The next morning, Sheldon wakes up and goes to the window. He sees Dr. Sturgis’s bicycle is still outside Meemaw’s house. When he spots Meemaw walking Dr. Sturgis out, an excited Sheldon rushes to his parents’ room. He tells them the news that Dr. Sturgis spent the night with Meemaw and announces he’s going to go over to congratulate them on the big step in their relationship.