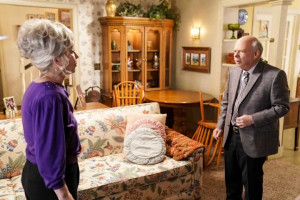 After Ira Rosenbloom asks Meemaw out, she tries dating two men at once. Sheldon intervenes to try preserve his grandmother's relationship with Dr. Sturgis, prompting Meemaw to set some ground rules.

Adult Sheldon: In that moment, I had an epiphany. I could draw up a contract for any social relationship. It was a helpful way to remove ambiguity in a world that was often hard to understand. Article three Sheldon will not spy on Meemaw's house with binoculars.

Adult Sheldon: I would go on to draw up such contracts throughout my life. With roommates. With my wife. Even with my own children.

Mary: And is that really necessary?
Meemaw: The Italians call it "corretto". It means correcting the drink.
Mary: So, a drink without alcohol in it is wrong?
Meemaw: Yep. Italian people, they know what's up.

Mary: I know you've had a number of gentleman callers, but I've never heard you speak like this before.
Meemaw: "Gentleman callers"?
George Sr.: And we wonder where Sheldon gets it.

Mary: He's just excited that Meemaw's dating a man he looks up to.
George Jr.: I wish she could date Tony Danza that'd be cool.
George Sr.: What is it with you and Tony Danza?
George Jr.: Well, the show doesn't come out and say it, but I'm pretty sure he's the boss.
Missy: I think the blonde lady's the boss.
George Jr.: Angela? Who's the oddball now?

As Meemaw and Dr. Sturgis eat dessert in her dining room, she asks why she’s only ever seen him eat vanilla ice cream for dessert. John explains that, taking a page from Richard Feynman, he has reduced the number of decisions he has to make by always choosing the same dessert. When Meemaw offers to cook for him sometime, he admits he enjoys cooking for her as it’s a means of showing his affection for her. John accepts her offer to cook barbecue for him and make it garlic-free. When the phone rings, Meemaw thinks it’ll be Sheldon checking on them, but it’s Ira who wants to know what she’s doing that weekend. Meemaw backs away from John to tell Ira that it’s not a great time and she’ll call him later. When the phone rings again, it actually is Sheldon checking up on them. After Meemaw returns to John, he asks if they’ll be having coitus tonight as he believes he’s pulled his hamstring.

When Mary takes a drink to Meemaw out on the porch, they sit down to talk about her “playing the field” by seeing Dr. Sturgis and Ira at the same time. Meemaw argues there’s nothing wrong with seeing what’s out there at her age, although Mary worries that it’s not very Christian.

Later that evening, Sheldon spies on Meemaw with binoculars as she leaves the house with Ira. When Mary finds Sheldon dialing the phone, he explains he’s calling Dr. Sturgis to say he saw Meemaw get in the car with Mr. Rosenbloom. Mary dives across the room to stop him making the call.

As Meemaw and Ira eat at a steakhouse, he asks how the brisket is. She says it’s good, although not as good as hers. When Ira offers to take her to New York so she could taste some real Jewish brisket. she thinks that’s a big step. Ira thinks that at this time of their lives they should travel and see the world.

As Ira continues listing the benefits of a trip to New York, Meemaw is still unsure. When he changes tack and suggests a cruise to New Orleans, Meemaw comes clean about seeing another man. Meemaw thought she would be able to handle it, but she admits she’s not cut out for dating two guys at once. Ira suggests she break up with the other man and only see him. Later, Ira is crying as he drives Meemaw home. He thought he’d be able to handle this, but through his sobs Ira wishes Meemaw and her other man well. Meanwhile, Sheldon runs into the living room to say that Meemaw and Mr. Rosenbloom have arrived back and he was crying.

At dinner time, Sheldon races through his food so he can be excused and get back to his viewing post. Elsewhere, as Meemaw serves up her barbecue food on a plate for Dr. Sturgis, she warns him that her barbecue will ruin everyone else’s. Just as she sits down to eat with John, the doorbell rings. Meemaw goes to answer the door, worrying it’s Sheldon, but she is surprised to find it’s a delivery guy with a dinette set from Rosenbloom’s Furniture. Meemaw didn’t buy any furniture, but the delivery guy hands her a card and suggests it’s a gift.

Back home, the family are watching Who’s the Boss? when Sheldon runs in to say they won’t believe what’s happening at Meemaw’s house. Meanwhile, Ira gets a phone call at his store from Meemaw, wondering why he’s sending her furniture. He explains he’s decided he isn’t going to go away quietly, he’s fighting for her love. As Dr. Sturgis comes out of the kitchen to see what’s going on, Meemaw asks if she can call Ira back. She comes clean and tells John one of her former boyfriends is trying to win her back with furniture. Rather than being alarmed, John finds the idea of being challenged by another man is making Meemaw even more attractive to him.

In the Coopers’ kitchen, George, Mary and Meemaw are talking about how Ira tried to win her back with a dinette set. When Mary asks if she’ll return the dinette set, Meemaw says no, even though she can’t really see herself taking Ira back. She thinks he's sweet, but she admits there’s something special about John. After George thinks Meemaw might be falling in love and she concedes she might be, Sheldon bursts in the room to say “Excellent, I love him, too.”

When Dr. Sturgis goes to Ira’s furniture store to see him, John accuses him of overstepping his bounds. He asks him to give up his pursuit of Connie, but Ira tells him instead to leave his store. As they stare down, Dr. Sturgis says a line in the sand has been drawn and Ira should cross it at his peril. As Dr. Sturgis turns to walk away, he hears Ira call him a weirdo. John goes back to Ira and tells him he has hurt his feelings.

Back in the Cooper’s kitchen, Mary says she knows Meemaw has had a number of “gentlemen callers”, but she has never heard her talk about a man like this. Mary wants to know more as this is the first time she’s seen her mother like this since Dad died. As Meemaw talks about what it was like to lose her husband at the start of their retirement, to mourn and cry and eventually move on, and then have to reenter the single’s world, George tears up.

At the furniture store, Ira and Dr. John Sturgis bond over their shared pursuit of Connie, who they both declare a remarkable woman. Ira apologizes for calling Dr. Sturgis a weirdo, but John admits he’s been called worse. After Ira calls John a great guy, he returns the sentiment. When Ira says he can’t just give up his pursuit of Connie, John understands and admits he’s finding the competition exhilarating.

When John goes up to Meemaw on her porch with some news for her, he admits he went to the furniture store to speak to Ira. Meemaw is outraged that he would go behind her back and interfere in her relationships. Meanwhile, Sheldon is watching with binoculars from his bedroom. Meemaw is even more upset when John reveals he and Ira are friendly now.

After Sheldon comes over to see whether they’re fighting, Meemaw’s anger only rises when she learns that Sheldon knew about John’s trip to the furniture store. Meemaw decides to put down some ground rules to give her relationship with John a chance. As Meemaw sets out her demands, Sheldon has a flash of inspiration: he could draft up a contract to govern any social relationship.

Later, Dr. Sturgis and Meemaw are with Sheldon as he writes up the “Cooper-Sturgis-Tucker Behavior Agreement” on his personal computer. After Sheldon prints it out, Meemaw signs it and Dr. Sturgis notarises it. Adult Sheldon says he went on to draw up such contracts throughout his life with roommates, with his wife, and even with his own children.