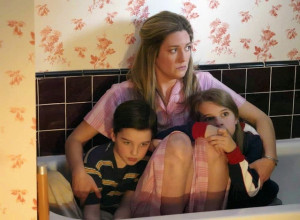 George Jr.: Hey, now that you're treating him like an adult, can I have his allowance?
George Sr.: That allowance is for chores, which you already don't do.
George Jr.: Come on. We all know I'm your favorite.
Meemaw: You're not even his third favorite.

Meemaw: Okay, here you go. I got you a shovel and a bucket and some gloves.
Sheldon: Did you check the gloves for spiders?
Meemaw: Is this my first day as Meemaw?

Mrs. Costello: Okay, let's see. What about Caltech in Pasadena?
Sheldon: I can't see myself living in California. I don't trust their carefree lifestyle.

Mary: Hey, what you reading?
Missy: A magazine.
Mary: Oh. Making a collage for school?
Missy: No, just reading it.
Mary: Look at that. Maybe Sheldon isn't the only bookworm around here. Which magazine?
Missy: Cosmopolitan.
Mary: What?
Missy: It's a magazine for today's woman. [Mary takes the magazine] Hey! I was about to find out what turns a man on.

Mrs. Costello: Are you interested in applying to a safety school in case you don't get in?
Sheldon: Safety school. You're funny.

When Mary goes to put laundry away in Sheldon and Missy’s room, she finds Missy reading a magazine. Mary’s initial pleasure that Sheldon isn’t the only bookworm around there is short-lived as she discovers Missy is reading Cosmopolitan, a raunchy woman’s magazine. After Mary takes the magazine away and scolds Missy for bringing filth like that into their house, Missy points out that Sheldon’s comic books also deal with adult themes but Mary never says anything about those. When Mary inspects the comic book on Sheldon’s desk, she is horrified by the violence and the sight of a blue man’s backside. Mary rushes out to give the owner of the comic book store a piece of her mind.

As Sheldon and Tam read comic books at the store, they discuss a Vietnamese superhero named Half-Face. When Mary storms in to the store, she demands to know whether the owner sold this comic book to her son. Sheldon and Tam watch nervously as Mary berates the “irresponsible” man. Sheldon is used to being embarrassed on a daily basis by his siblings but not his mother, so he tells his mother she’s embarrassing him. Mary admits she doesn’t care and warns the owner not to sell to Sheldon again, or he’ll have to face her husband. Mary calls for Sheldon to follow her out of the store.

As Mary drives a quiet Sheldon home, she’s still angry and can’t understand why he’d be interested in a book like that. Sheldon points out it’s about a Manhattan Project scientist and that comic books are a form of art, but Mary says he’s done looking at it as it’s filled with violence and nudity. Back home, Missy and Meemaw are preparing a salad for dinner when Georgie wonders where his mother is. Meemaw explains she found Sheldon’s inappropriate comic book and went ballistic. Meemaw points out to Georgie that it might be sensible to find a better hiding place for anything his mother might dislike.

When Sheldon goes to his bedroom, he finds Mary confiscating his comic books. Sheldon argues that the bible also belongs in the box as it contains “adultery, genocide, and even human sacrifice.” After Sheldon notes his displeasure that his mother continues to treat him like a child even though he’s so smart, Mary says that from this moment on she is done mommying him. Mary says he still can’t have his comic books back, though, as they’re for children and he’s now an adult.

That night, Sheldon’s new adult responsibilities included preparing his own dinner. Despite excelling at following instructions, his Shake ‘n Bake chicken falls through the bottom of the bag and onto the kitchen floor. As the rest of the family eat, Missy and Georgie are surprised Sheldon is having to cook his own dinner. As Meemaw hears pans clattering, she wants to go keep an eye on him, but Mary insists they let him handle it on his own. When Mary says if Sheldon needs help he can ask for it, Sheldon insists he doesn't need any assistance as he applies dishwashing liquid to his raw chicken.

That night, as Sheldon climbs into bed, Missy asks how his chicken was. Sheldon says it was not bad and was given a nice lemony flavor by the dish soap. When Mary comes to say good night, she kisses Missy and tucks her in, leaving Sheldon to tuck himself in without a goodnight kiss. After Mary returns to the living room, Meemaw asks if she’s had enough and is going to back down. Mary insists she is not, as Sheldon needs to learn he doesn’t know everything.

The next morning, Sheldon struggles to open a jar of jam to make his school lunch. He tries to fix it with science, but it doesn’t help. When Mary greets them good morning, Sheldon calls her Mary instead of mom. After Georgie asks her to sign a consent form for a field trip, Sheldon realizes he needs his signing, too. Mary doesn’t understand why an adult would need his mother to sign a form. Sheldon’s fury as his mother points out the school doesn’t think he’s mature enough to make his own decisions gives Sheldon the strength to almost open the jar.

At school, Sheldon goes to the guidance counselor's office to say he’s ready to go to college. After talking through some of his options, Sheldon settles on Harvard and insists he doesn’t need a safety school. At dinner that night, Georgie and Missy are jealous of the meal Sheldon whipped up for himself, despite his mother spending an hour making meatloaf for them. When Meemaw asks how adult life is treating Sheldon, he says he’s working on his application to Harvard. Mary tells him he’s not going away to Harvard, but Sheldon claims she doesn’t have a say in this. When Mary wonders how he would pay the tuition, Sheldon is sure he’d get a scholarship. Mary points out that it costs money just to apply to a college, money Sheldon doesn’t have.

When a smartly-dressed Sheldon goes to Radio Shack, he tells Randall he wants to apply for a job. Randall says it’s against company policy to hire little kids, even though he knows more about the technology than anyone there. A still smartly-dressed Sheldon goes to Meemaw’s house to ask if he can do chores for money. After she offers him lawn work for a dollar, Sheldon accepts even though he doesn’t like outdoor work and is scared of a garden gnome.

As George works on his playbook, Georgie comes to say he has something to show him. Georgie leads his dad to his bedroom where everything looks neat and tidy. George can’t help but wonder how he did everything himself and suspects Georgie shoved everything in the closet, but that’s neatly organized too. After checking under the bed, George admits he’s impressed and thinks there may be hope for Georgie yet. Just as he’s about to leave, George decides to look behind the door. When he pulls the door shut behind him, all of Georgie’s stuff falls out.

Meemaw takes Sheldon the tools he’ll need for the garden work. Back home, Missy is watching Looney Toons as Mary gets started on dinner. Missy is annoyed when a tornado warning interrupts the program. Mary rushes outside to tell Meemaw and Sheldon to come home with her as there’s a tornado watch. Meemaw isn’t worried as they’ve had a tornado watch every day and Sheldon thinks his mother is just annoyed he’s earning the money to send in his college application. When the siren starts blaring, Sheldon and Meemaw rush home with Mary.

During a thundery downpour, the whole family gathers in the bathroom. George and Georgie put up a mattress against the window, while Meemaw asks Sheldon how he’s doing. Sheldon insists he’s all right, but Georgie admits feeling scared. George says they’ll be fine and this will blow through in a few minutes. When the lights go out, Sheldon admits he’s not all right as they turn to flashlights and take shelter. As she hugs Missy and Sheldon close to her in the bathtub, Mary starts praying for her family to be spared.

When the storm is finally over, the family emerges to see debris strewn across the front lawn. Still, most of the neighborhood was spared. As George, Georgie and Meemaw go to check out her house and Missy uses the bathroom, Sheldon hugs his mother.