203 - A Crisis of Faith and Octopus Aliens 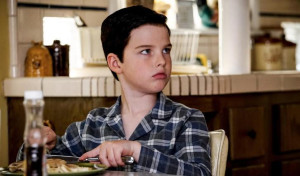 After a tragedy in the local community, Mary's faith is shaken. Seeing his mother doubt everything she believes, Sheldon becomes an unlikely ally.

Mary: Sheldon, faith means believing in something you can't know for sure is real. And right now, I am struggling with that.
Sheldon: So you don't believe in God anymore?
Mary: That isn't something for you to worry about. I need to figure this out myself.
Sheldon: Can I help? Maybe I could provide a fresh perspective.
Mary: I don't think so, baby.
Sheldon: Did you know that if gravity were slightly more powerful, the universe would collapse into a ball?
Mary: I did not.
Sheldon: Also, if gravity were slightly less powerful, the universe would fly apart and there would be no stars or planets.
Mary: Where you going with this, Sheldon?
Sheldon: It's just that gravity is precisely as strong as it needs to be. And if the ratio of the electromagnetic force to the strong force wasn't one percent, life wouldn't exist. What are the odds that would happen all by itself?
Mary: Why are you trying to convince me to believe in God? You don't believe in God.
Sheldon: I don't, but the precision of the universe at least makes it logical to conclude there's a creator.
Mary: Baby, I appreciate what you're trying to do, but logic is here. And my problem is here.
Sheldon: Well, there are 5 billion people on this planet and you're the perfect mom for me. What are the odds of that?

George Jr.: Would you feel more confident if I told you I already know how to drive?
George Sr.: Video games don't count.
George Jr.: I'll have you know I've driven Meemaw's car. I also drove your truck one night while you were sleeping.
George Sr.: Are you crazy?!
George Jr.: I parked it and everything, you had no idea.
George Sr.: Okay, let let me get this straight. You're trying to prove to me that you're a responsible person by admitting you stole my truck.
George Jr.: I said I was responsible, never said I was smart.

Sheldon: Any more thoughts on Radio Shack?
Meemaw: Sheldon, do you really think this is the appropriate time to ask that question?
Sheldon: I did, but now I'm second-guessing myself.

Sheldon: And then I said octopus aliens didn't need to become Christian because they're not affected by original sin.
Missy: You should've been there; Pastor Jeff almost started crying.
George Sr.: Oh, now I'm sorry I missed it.
Mary: That's your fault for having a hangover.
George Sr.: Or it's God's fault for putting Sunday morning after Saturday night.

In church, Sheldon raises his hand to ask Pastor Jeff a question as he talks about God giving his only son to the world. Sheldon wants to know whether the Pastor means “earth” or the “universe”. Pastor Jeff replies “earth”, but when challenged argues it’s a synonym of the universe. After Sheldon asks if a distant race of octopus aliens would also be saved by God, Pastor Jeff says creatures born without sin don’t need to be saved by Jesus. Sheldon wonders what would happen if the octopus aliens created Adam and Eve.

Back home, Sheldon tells his dad about what he said to Pastor Jeff at church. While Sheldon asks Meemaw if she’ll take him to RadioShack, Mary answers the phone. Sheldon goes back and forth with Meemaw and his father about going to RadioShack. Mary, clearly upset when she gets off the phone, explains that Stephanie Hanson’s sixteen-year-old daughter was in a car accident last night and died. Although Mary, George and Meemaw are visibly distressed by the news, Sheldon decides to ask again about RadioShack.

As George drives Mary to the funeral, he asks her how she’s holding up. After George remarks how awful it is for someone to die at sixteen, Mary insists it’s all part of God’s plan, but it’s not clear she fully believes that. Back home, Missy asks Meemaw why they didn’t get to go the funeral. Meemaw can’t see why they would want to attend a funeral and, after the kids start discussing dead people’s clothing, she sees it was probably for the best.

At church one work day, Mary goes to see Pastor Jeff. After Mary hands over the flyers for the clothing drive, he asks if she’s doing okay. Mary admits that she can’t stop thinking about the Hanson girl. Pastor Jeff thinks at times like this it’s important to take comfort in your faith, but Mary says that’s not working for her. The pastor understands these kind of moments can create doubt. It even happens to him and, when it does, his response is to roll up his sleeves and work harder to serve the Lord. Pastor Jeff tells Mary to get out there and find a way to express her faith.

The next morning, when Mary walks into the kitchen and sees Missy about to eat a spoonful of cereal, Mary goes over and says grace. After Sheldon comes into the kitchen, he asks his mom if she’s received any distressing phone calls today. As she hasn’t, Sheldon asks if she could take him to RadioShack. Mary explains that she’s very busy today with a full calendar of faith-based activities: taking food to the Hanson family, a new prayer group, and starting work on a faith garden out back.

Over the course of the next week, Mary throws herself into expressions of her faith. She enthusiastically hosts a new prayer group. After George finds her a rock big enough for a psalm, Mary starts work on her garden. Mary works to update the board outside the church. Sheldon wakes up in the middle of the night with Mary praying over his bed. Finally, after painting a psalm on her rock, Mary starts to pray. When she asks the Lord to look after the Hanson family in their time of grief, she starts to feel emotional and struggles to complete her prayer. After Mary breaks down crying, she gets up and kicks a stool into the faith garden.

As George drives him home, Georgie asks his father when he’s going to take him to get his learner’s permit. George can’t believe he would ask this given all that’s happened that week. Georgie insists he would make an excellent driver and, to support his case, says he already knows how to drive, having driven Meemaw’s car and taken George’s pick-up truck for a ride. George is stunned that his son thinks revealing this would prove he is responsible, but Georgie never claimed he was smart.

On a Saturday night, Mary knocks on Meemaw’s door and asks to go out. Meemaw can tell Mary has been drinking, although she’s disappointed to hear it’s only wine coolers. After Mary buys a round of beers at a bar, Meemaw warns Mary to pace herself. Back home, as George puts Sheldon and Missy to bed, Missy points out that their mom usually kisses them goodnight. George gives Missy a goodnight kiss and offers the same to Sheldon, but he respectfully passes. When Missy tells him that their mom also usually does a goodnight dance, George realizes she’s just messing with him.

As Mary finishes off another beer at the bar, Meemaw tells her to slow down as she’s got church in the morning. Mary questions whether she’ll be going. When Meemaw asks what’s happening with her, Mary says she was writing a sympathy card for the Hanson family and when she wrote “Your daughter’s in a better place”, she had to stop because she couldn’t see how that could possibly be true. When a creepy patron comes offers Mary a shoulder to cry on, Meemaw sends him packing. Later that night, George answers the door to a tipsy Mary, clinging to her mother. Meemaw passes her over to George and tells him she’s his problem now.

The next morning, Sheldon and Missy are surprised to find George making breakfast. After he tells them their mom isn’t feeling well, Sheldon worries she’s contagious. Missy is happy with George’s cooking when she finds out they’re having chocolate chip pancakes. After Sheldon asks if Mary is getting up for church, George says she might not be up for it today. Sheldon instantly senses that something is wrong.

At dinner that night, when Sheldon asks a dejected looking Mary if she’s feeling better, Mary unconvincing insists she’s fine. Missy is excited when George serves up takeout pizza for dinner. When Sheldon notices Mary take a bite of pizza without first saying grace, she tells him not to worry about it.

When Sheldon comes out to ask if he can sit with his mother on the porch bench, she says she needs to be alone right now. Sheldon tells her he’s scared that she stopped going to church and he doesn’t understand what’s going on. After Mary says it’s hard to explain, Sheldon worries it might be something he’s done. Mary tells him to come sit with her. She explains that faith is about believing something without knowing for sure it’s real, and she’s struggling with that right now. Sheldon asks if he can help as he might be able to provide a fresh perspective, but Mary doesn’t think so. Nevertheless, Sheldon talks about how minor deviations in the force of gravity would mean the universe couldn’t exist as it does. After Mary wonders why he’s trying to make her believe in God when he doesn’t, Sheldon says the precision of the universe at least makes it logical to believe there’s a creator. Mary argues logic doesn’t help as her problem isn’t in her mind, it’s in her heart. Sheldon tells her that out of five billion people on the planet, she’s the perfect mom for him; what are the odds of that? Touched by his warm words, Mary thanks the Lord for her little boy. Sheldon is pleased he fixed things, even if Mary insists that he should share credit with the Lord.

At church, Sheldon asks Mary if this is the an appropriate time to point out that there are conflicting statements in the bible. Mary tells him they can discuss it in the car, but Meemaw raises her hand to tell Pastor Jeff that her grandson has a question.