211 - A Race of Superhumans and a Letter to Alf 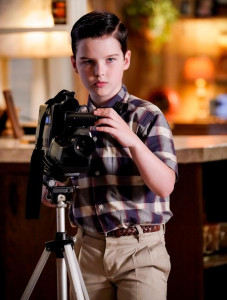 After Missy asks Sheldon for help with her math homework, he experiments to see whether he can unlock her intellectual potential. Meanwhile, Georgie joins Mary's bible study group so he can spend more time with Veronica.

Pastor Jeff: All right, everybody, welcome to the 1990 East Texas Baptist Olympics. [LAUGHS] 'Cause we're in the pool of water. Anyway, I want to welcome our little sister Veronica Duncan, who I will be dunkin'. [CHUCKLES] Sorry. I can't turn it off.

Mary: Georgie, if you want to be a good Christian, maybe you should stop lying through your teeth.
George Jr.: Just be happy I brushed them, okay

Mary: And you. Getting baptized just to kiss a girl? What were you thinking?
George Jr.: Sounds like you know what I was thinking.

Pastor Jeff: And I also want to welcome George Cooper, who has recently found his way to the Lord.
George Jr.: Howdy. Praise Jesus.

George Jr.: You here to see me?
Veronica: I'm here for your mom's Bible study.
George Jr.: Oh, sure, of course. I'm glad you could join us. Come in, won't you?
Veronica: You're part of the group, too?
George Jr.: Faith, the Bible, God, I'm nuts for that stuff.

As Sheldon watches Conquest of the Planet of the Apes on TV, Missy comes to ask if he could help her with her math homework. After Sheldon says no, Missy explains she’s finding the fractions work really hard. It occurs to Sheldon that if he could teach mathematics to someone as dull-witted as his sister, he could create a race of superhumans to do his bidding.

In their bedroom, Sheldon tells Missy to look at fractions like a pie, but Missy is only interested in what type of pie. Meanwhile, Georgie answers the door to Veronica, who is clutching a bible. After she explains she’s there for Mary’s bible study class, Georgie says he’s glad she could join them. Veronica is surprised he’s part of the group, but Georgie says he’s nuts for faith, the bible and God.

Back in their room, Sheldon has cut up a birthday paper plate to teach Missy fractions and he’s pleasantly surprised that she’s getting the hang of it. Adult Sheldon is pleased that in less than ten minutes, he taught fractions to a monkey. In the living room, Mary wonders what Georgie’s doing when he sits down next to her. Georgie says he’s there for bible study group. When Mary sees Veronica across the room, she gets an idea of what Georgie’s doing and tells him to stop lying through his teeth.

After Missy thanks Sheldon for helping her complete her homework, Sheldon asks if she would like him to introduce her to algebra. Missy does not, causing Sheldon to realize he needs a more sophisticated technique to get to his simian sister. He offers her a banana if she’ll learn a little algebra. Meanwhile, Mary asks  Georgie to read a passage from Matthew 4 to the bible study group. When he struggles to locate the passage, Veronica passes him her bible open to the right page. Georgie says it’s powerful stuff and asks the assembled group for an “Amen.”

As Sheldon looks around the school library, Ms. Hutchins asks if she can help him. Sheldon explains he’s looking for books on education theory so he can teach someone who falls into the traditional category of stupid. Sheldon says Missy is so stupid she wrote a fan letter to Alf. Out in the school halls, Georgie takes a cross necklace out from under his shirt and goes to see Veronica by her locker. Georgie says that as he was praying last night, God spoke to him and told him he and Veronica should spend more time together. After Georgie clarifies that they’d be doing the usual Christian activities like praying or helping the needy, Veronica says she’s okay with that/

As they eat lunch in the school library, Tam asks Sheldon whether he is really hoping to create an army of super intelligent children who will do his bidding. Sheldon says that in a perfect world he is. Sheldon mentions that according to Socrates all knowledge exists in the student and just needs to be drawn out by skillful questioning. As he and Tam debate whether they knew that before Sheldon read it out, Ms. Hutchins walks by unimpressed.

As Sheldon sets up a video camera in his bedroom, George comes by to see what he’s doing. Sheldon explains he’s keeping a video diary of his attempt to create Homo Novus. When George asks what he wants for dinner, Sheldon says he thinks George already knows the answer.

In church, Mary and Veronica are singing a hymn enthusiastically as George struggles to keep up. When they pray, Mary asks the Lord to take care of her family and keep Veronica on the path of righteousness, Veronica asks God to take care of her sister, and Georgie asks God to make Veronica fall in love with him. Mary thanks God for bringing Georgie to church, even though they both know why he’s there, and asks Him to ignore whatever Georgie’s praying for.

In their bedroom, Missy is writing a list of possible boyfriends for her Cabbage Patch doll, Celeste. Sheldon says he’s been doing some research and has come to the conclusion that he doesn’t need to teach Missy anything as she already knows everything. Sheldon asks if she would like to explore that great treasure trove of knowledge, but Missy doesn’t know what a trove is. After Missy admits she has sometimes described herself as dumb and doesn't like that feeling that way, Sheldon offers her an opportunity to achieve the full potential of her mind.

As Georgie sings hymn in the car on the way home from church, Mary asks who he thinks he’s fooling. Mary points out that Veronica has a tough family situation and is trying to improve her life. She doesn’t want Georgie taking advantage of her. Georgie insists they’re nothing more than bible buddies and tells his mother she should ask herself why she sees sin in the hearts of others. After Mary accuses him of pushing it, Georgie prays to the Lord Jesus to help Mary with her anger.

In the kitchen, Missy asks Sheldon why they need the video camera. After Sheldon says it’s so future people will be able to see her transformation, Missy goes to get dressed up for the people of the future. Missy returns wearing her pink princess dress and holding her Cabbage Patch doll, Celeste.

As Georgie and Veronica walk through the school halls, he asks if she wants to hang out on Saturday. Veronica says she can’t as she’s signed up to get baptized. After Georgie says he’s been meaning to do that, Veronica suggests they get baptized together. Georgie likes the sound of that. In the library, Sheldon tells Tam he doesn’t know where he went wrong. After two hours of skillful interrogation all he could extract from Missy’s brain was that there’s some sort of block with new kids on it. When Sheldon tells Ms. Hutchins the project is going poorly, she suggests Sheldon look into the work of B.F. Skinner on behavior modification. Sheldon is intrigued by the idea of using punishment to get the results you want.

As George and Meemaw drink beer at the kitchen table, Meemaw tells him about winning money back playing Caribbean Stud Poker. George asks her how you play that game, but Meemaw can’t remember as she was drunk. When Mary signals her displeasure with her mother’s lifestyle, Meemaw takes it as a badge of honor. After Georgie arrives home and says he’s getting baptized tomorrow, Mary says that boy’s randyness knows no bounds. Mary explains he’s only doing it because of that Veronica girl. George understands, admitting he once hitchhiked all the way to Florida on the off chance a girl there might have been interested in him.

As Sheldon addresses the camera in his bedroom, he says according to B.F. Skinner if he can find the appropriate punishment for Missy, there’s no limit to what she might be able to learn. Sheldon settles on using Missy’s favorite doll, Celeste, as punishment.

As Pastor Jeff stands in a pool of water to baptize Georgie and Veronica, Mary and Meemaw watch from the pews of the packed church. Back home, Sheldon asks Missy if she’s ready to learn some advanced calculus. After she says no, Sheldon says he’ll be right back.

After Pastor Jeff baptizes Veronica and dunks her in the water, Georgie can’t take his eyes off her as she shakes the water off her face and hair. Elsewhere, Sheldon returns to Missy holding Celeste and a pair of scissors. He threatens Celeste’s pigtails if Missy doesn’t agree to learn advanced calculus.

After Georgie is baptized, Veronica hugs him and says she’s so happy they did this together. Georgie tells her he loves her and goes in for a kiss, but Veronica pulls away and then punches Georgie in the face. When Sheldon cuts a pigtail off Celeste, Missy punches him.

Back home, Mary tells Sheldon to explain himself. Sheldon argues he was trying to expand Missy’s intellectual horizons, but Mary’s heard enough. When Mary asks Georgie what he was thinking getting baptized just to kiss a girl, Georgie says it sounds like she knows what he was thinking. Mary grounds them both.

After Missy writes a letter to ALF explaining she’s his number one fan, Alf reads the letter and decides to send her a t-shirt.