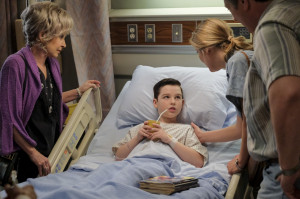 Sheldon turns into the world's worst patient when he has to spend a few days in the hospital. Meanwhile, George feels guilty for doubting Sheldon was ill.

When Sheldon has trouble sleeping and his mother has gone to the cafeteria, Sheldon asks Nurse Robinson to sing Soft Kitty to him.

Dr. Gilbert: So, those pain meds should already be kicking in. Then my buddy Gary here is gonna administer the gas, which'll help you sleep. And once you're under, we'll make a little incision and snatch that guy right outta there. Any questions?
Sheldon: Yes. What kind of doctor says, "Snatch that guy right out of there?"
Dr. Gilbert: Just trying to put you at ease.
Sheldon: It didn't work. Where did you go to medical school?
Dr. Gilbert: University of Nebraska.
Sheldon: Uh-oh. Did you at least graduate with honors?
Dr. Gilbert: Top of my class.
Sheldon: Have you had any alcohol in the last 24 hours?
Dr. Gilbert: Not a drop.
Sheldon: How much sleep did you get last-
Dr. Gilbert: Gary, can we-
Gary: Got it. Just relax and start counting backwards from 100.
Sheldon: Wait, Gary, where did you study anesthesiolo-

Ricky: Yeah, they're gonna put a patch on it.
Sheldon: And then it just stays there forever?
Ricky: Yeah, like a Band-Aid you never have to pull off.
Sheldon: That's great, because that's the worst thing about Band-Aids. [Ricky chuckles] They may have removed my gallbladder, but not my wicked sense of humor.

Nora: So, we've got a tummyache?
Sheldon: Yes. I'm afraid it might be cholera.
Nora: Again?
Sheldon: I have one of the symptoms.
Nora: Okay, on a scale of one to ten, what's your pain level?
Sheldon: Three point four seven.
Nora: That's pretty serious. But since you're at a 3.47, I'm gonna give you the strongest medication I'm allowed to give you.
Sheldon: You're an angel of mercy, Nurse Nora. Ooh, cherry.

After Mrs. MacElroy asks her class why Herman Melville shifted the narrative voice in Moby Dick, Sheldon raises his hand. Ms. MacElroy for somebody - anybody - else to put their hand up, but nobody does. When she reluctantly turns to Sheldon, he says he has a tummy ache. As Derek mocks him for a tummy ache and using the word ergo, Ms. MacElroy tells Sheldon to go to the nurse. As he leaves the class, Sheldon tell Derek that ergo is Latin for hence.

When Sheldon arrives at Nurse Nora’s office, she’s not surprised to see him. His previous visits have included concerns about leprosy, scurvy and cholera. When Nora asks him about his tummy ache, Sheldon says his pain scale is at a 3.47. Nora gives him the strongest medication she’s allowed to give him: cherry-flavored Tums.

When George gets a call in his office from the nurses’ office, he isn’t too concerned to hear Sheldon has sought medication attention again. After Coach Wilkins hears Sheldon visited the nurse again, he tries to guess what ailment is bothering him this time: yellow fever, dengue fever or cat scratch fever. Meanwhile, Sheldon groans in Ms. Ingram’s math class, but he’s not quibbling with her math this time. Sheldon’s pain has escalated to a 4.9.

George holds Sheldon close as he drives him home from school. George assures Sheldon he’s going to be fine, insisting all he needs is a good bowel movement. Later, Mary gets and asks where Sheldon is. George says he’s fine and is in the bathroom working it out. When Mary checks on him, Sheldon says he doesn’t feel well and is adamant this isn’t a fecal issue. Sheldon says his tummy is really hurting and Mary thinks he feels a bit warm.
When Mary goes to check on Sheldon and Missy in bed, Sheldon says he’s feeling worse than the time he ate a bus station tuna sandwich. Mary is sure he’ll feel better in the morning. When Missy asks her mom if she knows that twins can feel each other’s pain, Mary tells her she’s going to school tomorrow. Later, as George, Georgie and Mary watch TV, Mary keeps anxiously looking back at Sheldon’s room. George tells Mary to relax now that Sheldon’s sleeping. When Missy comes to say something’s really wrong with Sheldon, the family go to check on him.

When George and Mary arrive at the hospital, George calls for a doctor as he carries Sheldon in his arms. Adult Sheldon admits he was in too much pain to tell his father “I told you so”, but for years after he reminded him constantly. Back home, Meemaw gets off the phone and tells Georgie and Missy that Sheldon needs to have his gallbladder out. Missy wonders how he’ll pee now and asks they’ll bring the gallbladder home so they can see it.

Mary is praying as George paces the hospital waiting room, beating himself up for not listening when Sheldon said he didn’t feel well. Mary points out that the doctor said gallbladder issues are rare in children. George says Sheldon is always complaining and it’s usually nothing. Mary understands but is keen to get back to her prayers.

In the operating room, Dr. Gilbert tells Sheldon that the pain meds should be kicking in and his “buddy” will now administer the anaesthetic. Sheldon questions Dr. Gilbert’s credentials and whether he’s had alcohol in the last twenty-four hours. As Sheldon inquires whether he slept well, Dr. Gilbert quickly gets the anesthesiologist to supply the gas. As Sheldon loses consciousness, he drifts into a dream world where he’s Captain Ahab on an intergalactic ship trying to take down his whale of a gallbladder.

Back home, Meemaw tucks Missy into bed and assures her that Sheldon going to be fine. Meemaw says if she hears any news she’ll come wake Missy up. After Meemaw turns the lights off and leaves, Missy climbs into Sheldon’s bed. In the hospital waiting room, George is angry that it’s been two hours and they haven’t heard anything. As George gets up to go yell at someone, Dr. Gilbert arrives and tells them everything went fine. Sheldon will need to stay there a couple of days, which is standard.

In his hospital room, Nurse Robinson asks Sheldon if he’s ready to see his family. The whole family rush in and fawn over Sheldon, with the possible exception of Missy who is hoping to see his gallbladder. When Sheldon asks if he can go home, Mary and George explain that the doctors want him to stay in the hospital for a few nights. Sheldon doesn’t understand and wants to go home. George offers to bring him anything he wants and Meemaw tries to point out the positives of having his own hospital room. Sheldon insists he wants to go home and feels nobody is listening to him.

Sheldon struggles to adjust to life as a patient: he berates a nurse from bringing the wrong flavor of Jello, he makes a clown cry, and he criticizes Nurse Robinson for bringing him the wrong kind of orange juice. Later, when Sheldon’s help sign flashes at the nurses’ station,  Nurse Robinson and Nurse Pryor argue over who should go see him. When Nurse Robinson goes to Sheldon’s room to find out what he wants, he says he’s having trouble sleeping. She asks if he’s tried counting sheep, but Sheldon says not as he is afraid of farm animals. He asks her to sing Soft Kitty but she isn’t familiar with the song, so Sheldon offers to teach it to her.

When George arrives with some of Sheldon’s belongings including his pillow, Sheldon wonders why it smells like Missy. Later, as Mary walks Sheldon back to his room, she tells him he’s doing great. When arrive back at the room, Sheldon is disturbed to find a new roommate, Ricky, in the bed next to his.

Back home, Georgie and Missy are watching TV with their dad when Missy asks if Sheldon’s coming home the next day. When George confirms he will be home tomorrow, Georgie says this has been a nice break. After George says he shouldn’t talk about his brother like that, Georgie wonders why he’s on Sheldon’s side all of a sudden. Missy claims it’s since he “almost let him die.”

As Sheldon unhappily flicks through the TV channels in his hospital room, Ricky tells him he complains a lot. Ricky pulls back the curtain and tells Sheldon he needs to relax. Sheldon wonders how he can relax when he’s being kept captive in a bacterial playground. As they talk about why they’re there, Ricky explains he is having surgery tomorrow to patch a hole in his heart. Back home, Meemaw finds Missy in the kitchen working on a welcome home sign for Sheldon. After Missy explains it took her half an hour to do the W, Meemaw asks if she wants some help. When Missy says yes, Meemaw calls for Georgie to get his ass in there.

As they walk along the hospital corridor, Sheldon and Ricky talk about how they found out they were ill. Later that night, as they read comic books in their beds, Ricky asks Sheldon what he’ll do when he gets home. Sheldon says he’ll enjoy using his own bathroom. Ricky admits he doesn’t mind it in the hospital, even if the food isn’t as good as his grandmother’s. When Sheldon asks how long his grandmother’s been taking care of him, Ricky says she’s been looking after him all his life. Ricky is excited to get his heart fixed so his grandmother won’t need to worry about him anymore. Ricky jokes that with a patch on his heart, he’ll sort of be like Iron Man.

When Sheldon wakes up next to an empty bed, he asks his mother where Ricky went. Mary says he’s in surgery. After Mary tells Sheldon she’s packing up his bag so he can go home, Sheldon asks whether they can wait until Ricky is back. Mary says it’s going to be a while, but if they get a move on they can check on him later. On their way out, Sheldon asks Nurse Robinson to give an Iron Man comic to Ricky. When Sheldon also thanks her for her care, she wonders when he became nice. After Sheldon and Mary get in the elevator and the doors close, the clown lady arrives and the doors open again. After she sees Sheldon, she decides to wait for the next elevator.

Back home, the sign has “WELCO” in big letters and “me Home Sheldon!” in tiny print. As the kids eat ice cream, Missy admits she actually missed Sheldon. He wants to know what exactly she missed. Sheldon is relieved when Mary tells him she just got off the phone with Nurse Robinson and Ricky is going to be fine. Mary offers to take him to see Ricky, but Sheldon can’t see why he would do that. When George arrives with a brand-new telescope for Sheldon, Adult Sheldon explains that for the next few weeks, his guilt-ridden father showered him with gifts. Then football playoffs started and that was that.