204 - A Financial Secret and Fish Sauce 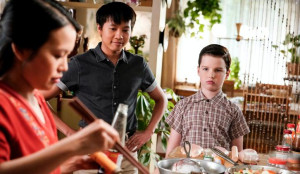 When Sheldon gets tangled up in a deception George and Meemaw are keeping from Mary, the stress leads him to seek safe harbor at Tam's house in his very first sleepover.

George Sr.: Sheldon, all you got to do is be cool.
Adult Sheldon: "Be cool." He might as well have asked me to fly around the backyard.

George Jr.: With God as my witness, I've never been to the dog track in my life.
Meemaw: She knows.
George Jr.: Oh, I've been there a bunch.

George Jr.: Mornin'.
Mary: Mornin'.
George Jr.: I slept in the nude last night. Felt every little breeze.
[Sheldon slides his food away]
Mary: Thank you for sharing that.
George Jr.: You're welcome.

As Ms. Ingram’s class wait for the school bell to toll on a Friday afternoon, Sheldon would usually resent the unwelcome break from education that the weekend presents. This is no ordinary weekend, however, as Sheldon will be doing his parents’ taxes. At home, he excitedly opens the mailbox to find the W-2 forms. Later that afternoon, Sheldon reads through the tax forms in his bedroom. At dinner that night, when Sheldon asks his mother why their grocery bills are up 12% on last year, Mary explains that she’s been buying groceries for the church food drive. Sheldon is excited at the possibility of a tax write-off. Unlike Sheldon and George, Mary doesn’t think that’s the point of charity.

As George tends to the barbecue, Sheldon tells him there is a check missing from their records. Sheldon has balanced the rest of the account and it appears to be a check for $300. George suggests putting it down as miscellaneous, but Sheldon’s never labeled anything miscellaneous in his life. Sheldon wants to go ask his mom instead, but George stops him and admits he gave the money to a friend for a good reason. George asks Sheldon to keep this quiet from his mother, arguing it’s better for everyone if she doesn’t know about this.

Later that night, Mary tucks Missy into bed and says goodnight to her. When Sheldon walks into the room, he talks nervously to his mother. The next morning, Sheldon tries to avoid seeming suspicious by limiting his interaction with his mother. At breakfast, he shovels food into his mouth as she tries to talk to him. Sheldon’s plan falls apart from Georgie shares a little too much about his breezy slumber, putting Sheldon off his food.

In the den, as George struggles to change the TV channel, he asks Mary where they keep the batteries. After she tells him to look in the drawer by the refrigerator, George goes to the cupboard and is surprised to see Sheldon squeezed in there. George tells Sheldon he needs to keep things together, but Sheldon insists this is him keeping things together. As Mary comes into the kitchen, George slams the cupboard door shut. Mary asks if George has noticed anything weird with Sheldon. She’s thinks he’s been awfully quiet lately and, after checking his potty journal, she noticed it’s been days since he had a bowel movement. George insists nothing’s wrong, but offers to keep an eye on Sheldon.

George goes over to Meemaw’s house to say they have a problem; he doesn’t know how long Sheldon can hold out. Meemaw points out she didn’t want him leaving a paper trail with a check. Meemaw insists it’s important that Mary does not find out, but George is worried about Sheldon’s digestive health. When George asks why they don’t just come clean, Meemaw says they could do that, but she would also have to reveal what George did at the church picnic. George thinks she’s playing dirty and wonders why she’s not nice like all the other grandmothers.

Back home, Sheldon is finding it difficult to avoid his mother in her own house, so he decides to get creative. Sheldon phones up a hotel to enquire about a room for the night, but is shocked at the price.

As they eat lunch in the school library, Sheldon asks Tam how he feels about a sleepover. Tam is excited as Sheldon’s parents let him watch TV and Jake and the Fatman is on tonight, but Sheldon explains he was hoping he could sleep at Tam’s house. After Tam says he’ll have to ask his mom, Sheldon points out he’s an ideal house guest as he’s clean, well-behaved and can fit in small spaces.

As George drives Sheldon to his first sleepover, George asks if he’s excited. Sheldon says it’s constipating and he’s only doing this to avoid his mom. George tells Sheldon he knows he’s having a tough time with this, but he’s doing great and time at Tam’s house will let him clear his head. When Sheldon wonders if he can tell his mother the truth then, George says the truth can hurt people and Sheldon wouldn’t want that. George tells Sheldon about a fun prank he could play on Tam, but when Sheldon struggles to see the funny side his father soon wishes he never bothered.

When they arrive at Tam’s house, George makes awkward small talk with Mrs. Nguyen before Sheldon goes inside. In the house, Sheldon is struck by some of the traditions of Vietnamese households. Although troubled by the vivid Christian iconography and the use of chopsticks over forks, Sheldon was pleased with most of the hygiene standards - including taking one's shoes off and washing one's hands and face before dinner. The use of a communal towel at the dinner table, rather than napkins, was a step too far, however.

Back home, as Mary pours a drink for George and Meemaw, she admits she finds it strange that Sheldon just volunteered to go on a sleepover. George thinks he’s just growing up and Meemaw says she’s worrying for no reason. Mary starts to worry that she’s done something to upset Sheldon. When Mary leaves to go tend to Missy, George thinks it’s time he and Meemaw came clean. Meemaw again threatens to reveal what George did at the church picnic, so George relents but says he doesn’t know how much longer they can keep this going.

In Tam’s bedroom, he tells Sheldon about Mystic Warlords of Ka’a, a card game featuring six kinds of secret warlords. The mention of secret sets Sheldon off thinking about the lie he’s keeping for his father. When Tam asks if Sheldon’s listening, he admits he was reliving a traumatic experience. Sheldon admits he has a secret that’s weighing on him and would like to tell Tam, but he is sworn to secrecy. Tam remarks that it’s too bad Sheldon’s not Catholic as he could reveal it in confession. Sheldon decides he’ll confess to Tam. After Sheldon reveals the secret, he instantly feels a huge weight lifting and with his conscience cleared, his colon feels ready to do the same. Later that night, Sheldon asks Tam if he thinks his dad would ever ask him to keep a secret from his mom. Tam doesn’t as his father is so honest it’s annoying. Mrs. Nguyen comes into says that’s enough talking, it’s time for them to go to sleep.

The next morning, George picks Sheldon up and asks how his first sleepover went. When Sheldon doesn’t respond, George tells him he’s talking to him. Sheldon says he’s not talking to his dad. He goes on to explain that he thinks his father was irresponsible to burden him with a secret. Sheldon says he always looked up to his father as a moral role model but he can’t do that anymore. Still, Sheldon accepts they made a deal and vows to keep the secret.

Back home, George goes to Mary while she loads the dryer to finally reveal the secret. George comes clean about the missing check, but says it was all Meemaw’s fault. Mary then questions Meemaw, who reveals she got a DWI but argues it’s not as bad as it sounds as she wasn’t exactly driving. Meemaw mentions she was at the dog track with Georgie. Finally, when Mary gets Georgie on the couch with Meemaw and George, he claims to have never been to the dog track until Meemaw reveals that his mother already knows. Mary finally hears the full story from Georgie. Horrified that they decided to keep this all from her, Mary tells George and Georgie they’re staying at Meemaw’s house until she says otherwise.

At Meemaw’s house, George figures Meemaw will be mad at him for coming clean, but she tells him to forget about it. After he notes his appreciation that she didn’t rat him out about the church picnic, Meemaw says they had a deal. As soon as George turns in for the night, Meemaw phones Mary to tell her all about the church picnic.