215 - A Math Emergency and Perky Palms 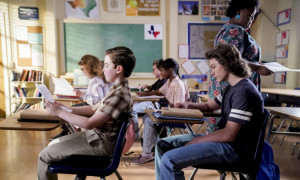 When Dr. Sturgis gives Sheldon a 95% score on a test, the pair have their first argument over whose method is correct. Meanwhile, Mary covers for Pastor Jeff when he is out sick.

Adult Sheldon: Dr. Sturgis was a wise man. It was a learning opportunity. And when the day comes that I'm wrong, I fully plan to admit it.

George Jr.: What's a math emergency?
George Sr.: That's when things don't add up. Oh, come on, guys. That was a good one.

Meemaw: Well, if he's wrong, then teach him to be right instead of berating him like a big ol' jackass.
Dr. John Sturgis: That's very hurtful!
Meemaw: Well, how 'bout that? They do run slower.

Ms. Hutchins: Sheldon, why aren't you in second period?
Sheldon: I'm working on this math problem.
Ms. Hutchins: I think you might be the first person in history who's ever cut class to do math.
Sheldon: The irony wasn't lost on me.

Adult Sheldon explains that from the first grade onwards he always received excellent marks, which is why it hit him like a ton of bricks when Dr. Sturgis gave him a 95 on a paper. As Meemaw asks Sheldon if he’s ready to leave Dr. Sturgis’s class, Sheldon points out his grade and insists Dr. Sturgis made a mistake. When Sheldon goes to talk to Dr. Sturgis about the mark, John insists it was justified because Sheldon didn’t use Maxwell’s equation. As Meemaw drives Sheldon home, she turns up the radio as he keeps complaining about the score in the back.

When Mary goes to ask receptionist Peg whether Pastor Jeff is in, she overhears him coughing in his office. When Mary goes into his office, he’s very snuffly so she avoids getting too close. Mary has prepared Sunday’s bulletin and wants to get a head start on ordering palms for Palm Sunday, as last year they left it late and they just weren’t perky enough. Noticing how ill Jeff looks, Mary suggests he go home and let his wife take care of him. When Jeff doubts his spouse would nurse him better, Mary tells him to at least see a doctor. Jeff says he can’t as a newlywed couple, the Walkers, is coming in for marriage counseling. When Jeff suggests Mary cover the session, she is unsure but she will if he really wants her to. Pastor Jeff tells Mary he’s going to go and rest so she’s in charge for the rest of the day.

After Ms. Ingram notices that Sheldon isn’t in her class, she asks Georgie where his brother is. Georgie doesn’t know and wonders if she really wants him there in class. Ms. Ingram decides to continue with her class. In the library, Ms. Hutchins asks why Sheldon isn’t in his second period class. After Sheldon explains he’s working on a math problem, she thinks he’s the only person to cut class to do math.

In Peg’s reception, Mary asks if there’s anything she can tell her about the Walkers. Peg doesn’t know much about them or marriage. When the couple arrives, they apologize for being late. Mary introduces herself and explains she’ll doing their session today. Mary tells them they’re in good hands as she’s been married for fifteen years, so whatever they’re going through she’s probably been through multiple times.

In their counseling session, Francine mentions how her husband, Elliot, would plan these elaborate picnics when they first got married. Mary wonders if the wooing has stopped now they’re married. Francine says he’s actually more doting than ever, prompting Mary to ask what the issue is then. When they say they’re having trouble in the bedroom, Mary is a little taken aback.

At school, George wonders what Sheldon is doing in his office. Sheldon admits he’s using the phone as they wouldn’t let him use the one in the principal’s office. When Sheldon explains he’s calling Dr. Sturgis with a math emergency, George decides he doesn’t care. After Sheldon tells Dr. Sturgis he’s wrong and he can prove it, Dr. Sturgis says bring it on.

In Meemaw’s kitchen, Dr. Sturgis tells Sheldon to go ahead. Sheldon makes his argument: Maxwell’s equations discredit energy density. John hits back that Sheldon’s way leaves him off by a factor of 3.54. Sheldon says that’s the square root of pi and rationalized and non-rationalized units are always off by four times pi, so Dr. Sturgis’s way would lead to a bigger error. John says Sheldon’s just trying to justify a shortcut. Sheldon insists it’s a more elegant and efficient way of working it out. After Dr. Sturgis tells Sheldon he applauds his effort and calls him “young man”, Sheldon insists he doesn’t want to be treated like a child, but a colleague. John agrees and tells Sheldon his work is the stupidest thing he’s ever seen. After Sheldon runs off crying, Meemaw wonders if he and his colleagues often make each other run out of the room crying. John admits it does sometimes happen, although they run slower as they’re older.

Back home, Mary fills George in on her day filling in for Pastor Jeff. Mary explains how she took care of the palms and then covered a marriage counseling session for a couple of young newlyweds. After George expresses interest in what kind of trouble they’re having, Mary says it’s confidential. George says he doesn’t need specifics, just general terms. Mary reveals it’s sexual problems, but says they prayed on it and the answer came clear as a bell: the husband is under a lot of stress at work. When George wonders what sort of a job could cause so much stress, Mary says he owns a flower shop, The Pretty Petunia. “Huh” is all George can offer.

Over a tense and quiet dinner, George asks Sheldon if he and Dr. Sturgis figured out their math emergency, but neither of them wants to talk about it. Georgie wonders what a math emergency is. When Missy goes to answer a phone call she thinks is for her, it turns out to be Pastor Jeff for Mary. Sheldon answers Georgie’s question by saying a math emergency is when an adult is too immature to admit that he’s wrong. After Dr. Sturgis calls Sheldon immature, Meemaw tells them to calm down. John says it bothers him when somebody with less experience accuses him of being wrong. After Meemaw suggests the best way of dealing with it would be to teach Sheldon and not berate him like a jackass, Dr. Sturgis runs out of the run crying, slowly. Mary returns with the good news that she gets to visit a shut-in.

After Mary walks into Mr. Gillford's cluttered house to deliver his food, she explains Pastor Jeff is out sick. Mary wants to chat while he eats, but he doesn’t think there’s anything to chat about. When Mary asks if there’s anything she can do for him, he suggests a sponge bath and claims Pastor Jeff does that for him. Mary doesn’t buy that.

When George walks into Sheldon and Missy’s bedroom, Sheldon asks if it’s time for lights out. George tells him in a minute. He says while he doesn’t understand what Sheldon and Dr. Sturgis are debating, he knows Sheldon was rude to an adult. George tells Sheldon he should be respectful of adults even when they’re wrong. Sheldon says he understands and thanks his dad for his “incredibly wise” advice. Missy realizes Sheldon just called their dad stupid without calling him stupid.

At Mr. Gilford’s again, Mary tries to clean up the food and the clutter but he says not to touch anything as he likes things the way they are. When Mary asks if she can make room to sit, he’s surprised she’s staying. When he wonders if she’s just trying to look like a good samaritan, Mary quotes scripture at him. Mr. Gilford doesn’t want to hear it from “some woman” as women don’t preach in their church.

In her kitchen, Meemaw apologizes to John for calling him an old jackass. John says it’s okay as he deserved it. Meemaw tells him not to be too hard on himself as Sheldon has always been difficult. John insists he’s not upset that Sheldon is difficult, he’s upset that he’s right. When Meemaw wonders why he’s only now saying something, John admits he can’t believe he missed his mistake and he would have caught it when he was younger. When John says he think he’s losing a step. Meemaw says she is too so he shouldn’t worry about it as they’ll lose a step together.

As Sheldon reads in the school library, Ms. Hutchins asks if he sorted out his test problem. Sheldon says he’s afraid not, he and Dr. Sturgis are still at a math impasse. After Sheldon asks Ms. Hutchins how she’s doing, she wonders why as he’s never expressed an interest before. Sheldon explains that his dad said he should be kind to “old people”. When Ms. Hutchins asks how old he thinks she is, Sheldon says his father also told him if a woman ever asks someone to guess her age it’s a trap. Not discouraged, Sheldon posits that she’s 53.

When Pastor Jeff walks into his office as Mary looks for stationery, it’s clear he’s still not well. Mary asks why he’s back at work, but he simply replies that not everyone has a happy marriage. Mary says things went really well in his absence. She had a lovely session with the Walkers and thinks they’re going to be fruitful soon. Pastor Jeff is less sure. Mary tells him about her visit with their shut-in, Jeff says he’s quite a character. Mary thinks that’s one of way describing him. Pastor Jeff thinks you’ve got to give him a pass as he was a war hero. Mary didn’t know as he never talked about it and she now regrets giving him a hard time back. Mary asks if she could go over to his house and give it another go.

When Mary goes to Mr. Gilford’s house, there’s no response. She goes inside and finds him dead in his chair. Later, the paramedic comes over to say sorry and tell Mary that the coroner’s on the way. When the paramedic notices the mess, Mary says that’s how he liked it.

As Sheldon works on his binoculars in the garage, Dr. Sturgis asks if he can come in and Sheldon agrees. John tells him he looked over the math again and Sheldon was right. After Dr. Sturgis admits he was wrong, Sheldon says that must have been difficult for him to admit. John says he thought this could be a learning experience for Sheldon, showing him that being wrong is not the end of the world. Adult Sheldon says Dr. Sturgis was a wise man and, when the day comes that he is wrong, he fully intends to admit it.

In church, Pastor Jeff says that before he finishes Mary Cooper is going to come up to say a few words. Mary talks about the death of a member of their congregation, James Gilford, a war hero. After telling them about his history, she invites them to join her celebrating in his life at the American Legion on Wednesday. When Mary asks for help cleaning up his house, Elliot volunteers himself and his wife.