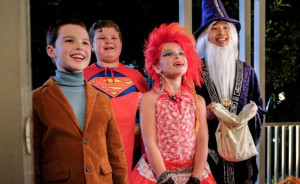 Mary: I can't believe this.
George Sr.: No good?
Mary: It's awful. It makes sin seem like a good thing.
George Sr.: Well, that's the problem, isn't it? I mean, if sin didn't seem like a good thing, nobody would do it.
Mary: George, please, I'm in no mood.
George Sr.: Hey. Wrath. That's one of the seven sins, right?
Mary: Pastor Jeff gave me this project because he knew I'd be best at it. Now Gene Lundy is taking over.
George Sr.: Oh, look, pride. And envy. Don't stop. Four sins to go. I'm guessing lust ain't happening tonight.

Adult Sheldon: I know what you're thinking: she's going to tear his throat out. But what in fact happened is she did what she thought Jesus would do. She went home and made that tuna casserole. It was a little salty but I ate it because she was in a mood.

Billy Sparks: Did you know Superman has a dog? His name is Krypto. He plays fetch in space.

Pastor Jeff: As you can see, our last attempt at a Hell House may have been a tad traumatizing.
I thought it was a hoot.
Peg: Some of the little ones peed their pants.
Pastor Jeff: But that wasn't the goal.
Peg: A nine-year-old crapped himself.

In Pastor Jeff’s office, he plays back a video of his appearance on local news to a stunned Mary. In the segment, he was being criticised for the church’s gruesome Halloween “Hell House”. After seeing footage of the brutal bar room fight portrayed in the Hell House, Mary wonders why Jeff is showing her this. Pastor Jeff explains that this year he thought they would go with a more family friendly production and she’d be the perfect person to take charge.

Back home, Mary tells the family of the changes she’s planning on making. Instead of Hell House, she’s going to call it a Heck House. Mary assures Missy it will still be scary, just without the blood and gore. Meemaw can’t see why she would want to scare people into following her religion, but Sheldon says fear has been a popular recruiting tactic for centuries.

At school, Georgie wonders what’s going on when he sees Veronica Duncan hugging Sheldon. When Sheldon walks by his brother, he explains that he’s tutoring her in trigonometry. Georgie asks Sheldon to introduce him to Veronica so he can be her “friend”. In Mr. Lundy’s class, Mary is watching as he wraps up drama class. After class is dismissed, she thanks him for letting her pick his brain about her plans for the Heck House. Mary is hoping to put on a little play in each of the rooms to represent the seven sins. Mr. Lundy suggests having a narrator in the form of Satan himself and, hoping to get the big role, shows off his range. After Mary remarks if he were just a little taller he would be perfect, Mr. Lundy points out he has lifts.

In the hallway, Sheldon takes Georgie to the door of the girls’ bathroom as Veronica emerges in a puff of cigarette smoke. Sheldon calls her over and introduces her to his brother. As Georgie awkwardly chats to her, she compliments his hair. Elsewhere, after Mary and Meemaw pull up outside a house, Mary explains that the realtor is letting them use it as the Heck House for free. After Mr. Lundy arrives, Mary asks him what he thinks of the house. Gene starts decorating it in his mind, right down to the smallest of details. Mary is surprised to hear he’s written a script as she was going to prepare one. Back home, Mary is reading through Mr. Lundy’s script in the kitchen. She complains to George that it’s awful and it makes sin seem like a good thing. Mary is upset that Gene is taking over the entire project.

In the garage, Sheldon is playing Dungeons and Dragons with Tam and Billy Sparks. Billy is dressed as Superman for Halloween - a week early - and thinks he’s Superman in the game. Tired of arguing the point, Sheldon and Tam just let Billy’s character fly. When Georgie comes to say dinner’s ready, Tam says he saw him talking to Veronica Duncan. After Tam asks how well Georgie knows her, he says not as well as he’s about to.

In the drama class, as Mary and Mr. Lundy audition students for the role of wrath, Gene stops them because it’s not violent enough. In the school corridor, Mr. Lundy unrolls a poster for the haunted house which features his name prominently. Later, at the Heck House, Gene gives realtor Fred guidance for being the personification of lust. Gene assures him there will be kissing and touching, but Mary doesn’t like that idea and wants it to be pretend kissing and touching only. Gene tells her that if he’s putting his name and reputation on the line he needs her to back off. Mary reminds him the purpose is to show how sin destroys our lives and she argues he’s making it into a good thing. When Fred’s “make out partner” shows up, Mary is outraged at the thought of children walking through the house and seeing a half-naked woman. Mr. Lundy tells Mary to leave it to him, a theater professional, and go home and bake a tuna casserole instead. After Mary storms off home, she does indeed make a tuna casserole.

On Halloween night, a group of kids are walking through the house when Mr. Lundy appears as the devil in a burst of smoke and red light. Mary, dressed as an angel, watches on in disgust as Gene takes center stage. Meanwhile, Sheldon [Carl Sagan], Missy [Cyndi Lauper], Billy Sparks [Superman] and Tam [a wizard] arrive at a house for trick-or-treating. The woman thinks they’re cute in their costumes and asks who they’re supposed to be, but she doesn’t know who Carl Sagan is, disappointing Sheldon. Meanwhile, Georgie sits with Veronica as she smokes and drinks on a park bench in the neighborhood.

Back in the Heck House, Mr. Lundy is showing the kids to the room of greed, detailing all the great stuff the guy obtained. After Mary jumps in to tell Satan he left out how greed is the root of all evil, he claims it’s in there as subtext. Elsewhere, Sheldon can’t believe nobody knows who Carl Sagan is.

As they kiss on the bench, Veronica asks Georgie if he wants to come to her house as nobody’s home. George instantly accepts the invitation. Meanwhile, Mary sits in the “heaven” room, complaining to George and Meemaw that nobody came. When Pastor Jeff checks in, he wonders why Mary’s so glum as donations are through the roof. Mary is disappointed the pastor only seems to care about raising money, pointing out that nobody came to be saved.

When Veronica and Georgie pass by the heck house, she convinces him to go in and check it out. Inside, Mr. Lundy starts another performance as the devil as Veronica and Georgie watch. Adult Sheldon explains that Mary’s fears that no one would be saved that night proved incorrect as Veronica is moved by the visions of sins to repent and change her ways. Adult Sheldon mentions that Veronica went on to live a charitable and giving life, while Georgie became a devout atheist that night.

When the kids stop by another house, the woman instantly recognises Sheldon as a young Carl Sagan. He’s pleased by the vindication - the sweetest candy of all.