213 - A Nuclear Reactor and a Boy Called Lovey 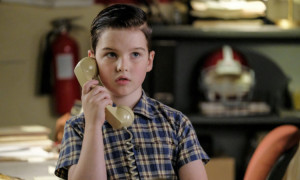 After George complains about his electricity bill, Sheldon sets about building a small nuclear reactor. Meanwhile, Meemaw is worried that she won't appear smart when Dr. Sturgis invites her to be his plus-one at a university event, and Georgie is upset to learn that Veronica has a boyfriend.

Sheldon: Georgie, question: In the hallway earlier today, were you upset or hungry?
George Jr.: Shut up.
Sheldon: That's hungry.

George Sr.: Where's Georgie?
Mary: I don't know. I called him ten minutes ago.
Missy: He's probably curled up in a ball, crying about Veronica.
Mary: Why do you say that?
Missy: It's just what I'm hearing.
George Jr.: From who?
Missy: I'm kinda plugged into this town.

Dr. John Sturgis: Connie, I believe I have answers to all your questions.
Meemaw: Lay it on me.
Dr. John Sturgis: Time: the event begins at 6:00 p.m. The dress code is: business attire. Dinner will be served, but it's been suggested that we eat first, because the food is dreadful.
Meemaw: Good to know.
Dr. John Sturgis: And last but not least, a camelid is any member of the camelidae family, such as llamas, alpacas or vicuñas. You didn't ask that one, but, uh, it seemed like something you should know.

Over a montage of fathers around the world complaining about their children dawdling with the refrigerator door open, Adult Sheldon explains there are certain phrases that are used by dads around the world. As Sheldon stands in front of the refrigerator trying to decide on a dessert, George tells Sheldon to close the door as he’s wasting money. Sheldon explains he’s having trouble deciding between pudding and Jell-O. When George complains about his high electricity bill, Sheldon blames Missy for her night-light. George once again asks Sheldon to close the refrigerator door.

In the school hallway, Georgie goes over to Veronica and apologizes for his crazy behavior. When Georgie asks if there’s anyway she can forgive him, Veronica accepts his apology and agrees to be friends again. When Georgie asks if they could hang out on Saturday night as friends, Veronica says she can’t as she’s got plans with her boyfriend. As the word “boyfriend” reverberates around Georgie’s head, Sheldon and Tam walk pass by him in the hallway. Tam tells Sheldon he thinks his brother looks upset, but Sheldon would have guessed hungry.

When Sheldon goes to see his science teacher, Mr. Givens, he explains he’s curious about more cost-effective ways of generating electricity. Mr. Givens gives Sheldon a rundown on the options, but Sheldon isn’t keen on any of them. Oil and coal are too dirty, hydro is too wet, solar is a problem with his fair skin, and wind is too reliant on the wind. Finally, Mr. Givens mentions nuclear. Sheldon is intrigued and has just one more question: how do you build a nuclear reactor? Unsurprisingly, Mr. Givens doesn’t know.

When Dr. Sturgis calls Meemaw and affectionately refers to her as his little Vicuña - the cutest camelid, Meemaw asks what’s up. Dr. Sturgis explains there’s an upcoming event at the university and asks her to attend as his guest. After Meemaw agrees, Dr. Sturgis says it’s a date and gets ready to hang up. Meemaw interrupts to ask for more information. What is the event? Friday. What time? Dr. Sturgis is not sure. Food? He has no idea. Dress code? Not a clue. Meemaw tells him to do more research and get back to her.

In the living room, Sheldon phones up a TV studio and asks to speak to Professor Proton. When the host is unavailable, Sheldon leaves a message saying he is trying to build a nuclear reactor and could use some help. When Georgie arrives home, Sheldon asks if he was upset or hungry earlier in the hallway. After Georgie tells him to shut up, Sheldon is sure he’s just hungry.

In Meemaw’s kitchen, Dr. Sturgis gives her more information about the university event, including time, food and dress code, and an explanation of what a camelid is. When Meemaw asks if everyone at the event will be a scientist like him, John says not everybody as she will be there. Meemaw admits that’s what she was worried about as she didn’t go to college and was a total screw up in high school. Meemaw is worried she won’t fit in, but John assures her everyone will love her. He says the general consensus among the faculty is that she doesn’t exist.

When Meemaw’s doorbell rings, Dr. Sturgis answers the door to Sheldon, who asks him where he could obtain radioactive material. Sheldon explains he’s trying to build a small nuclear reactor to power his house and perhaps the whole neighborhood, if they’re nice to him. Since Sheldon doesn’t have any unexploded atomic bombs or an X-ray machine lying around, Dr. Sturgis recommends finding smoke detectors which contain trace amounts of americium-241. He bets that if Sheldon tells companies it’s for a school project they might provide them for free.

Later that night, Sheldon is busy studying a book as the rest of his family, minus Georgie, eat dinner. When George wonders where Georgie is, Missy suggests he’s crawled up in a ball crying about Veronica. Mary goes to check on him but he doesn’t want her to come in. Mary goes into his room anyway and finds a dejected Georgie laying on his bed. Despite initially saying he doesn’t want to talk about it, Georgie explains that Veronica has a boyfriend. Mary already knows about him as he and Veronica through the church. Georgie says he can’t stop thinking about Veronica with another guy and he feels like he’s been punched in the gut. Mary tells him this will pass and he’ll meet other girls, but he says they won’t be Veronica.

As Mary returns to the dinner table, Missy is gossiping with her dad. When Mary says her poor baby is just crushed, George says he’s been through that himself. After Mary asks when she broke his heart, George says it wasn’t her. Mary wants to know who it was, but luckily for George, Sheldon breaks his silence to say he thinks he’s solved their electricity problems. Mary won’t let it go though.

As Sheldon gets off the school bus near his home, Adult Sheldon says that for many children their happiest memory is the day they learned to ride a bike or got a puppy, but for him it was the day he received 57 defective smoke detectors loaded with americium-241. Meanwhile, in his bedroom, Georgie writes a love letter to Veronica.

As George tries to unblock a toilet, Mary is still itching to know the name of the girl who broke his heart. George insists it’s unimportant as it was so long ago. When Mary promises to drop it forever if he tells her the name, Georgie reveals it was Kathryn Dempsey. Mary is outraged as she knows her and George has never mentioned he was once in love with her. George points out it’s irrelevant as she didn’t love him back. Mary wants to know if she had loved him back, would he have married her instead?

In the garage, Sheldon is wearing rubber gloves as he disassembles a smoke detector. Billy Sparks, who is eating a bowl of Lucky Charms for dinner, comes to see what Sheldon’s doing. Sheldon explains he’s building a nuclear reactor and, once it’s finished, plans on standing in front of the refrigerator for as long as he wants.

In the school hallway, George walks towards Veronica with his love letter in his hand. Before he can hand it to her, a jock snatches the letter away and reads out loud to the rest of the students. As everyone laughs at his letter, Georgie walks away in shame.

As Dr. Sturgis and Meemaw arrive at the university event, she takes two glasses of champagne to calm her nerves. When a colleague of John’s, Dr. Linkletter, comes over to talk, John introduces him to his girlfriend, Connie. When Dr. Linkletter refers to her as Dr. Tucker, Meemaw corrects him and says she’s not a doctor. Dr. Sturgis is keen to point out she is very much real and involved with him, though. After Meemaw tells him to change the subject, John tells her that Dr. Linkletter is working on a theory of quantum gravity. As Dr. Linkletter tries to explain string theory, Meemaw flashes back to something Sheldon told her about the subject. After she repeats Sheldon’s words verbatim, Dr. Linkletter is impressed.

At home, Sheldon calls the TV station which makes Professor Proton again to ask to talk to Arthur Jeffries. He leaves another message saying he’s got his hands on the radioactive material he was seeking. Sheldon gives them his address, although he points out he already has an autographed picture so maybe they could send one of Professor Proton’s bow ties instead.

Out in the garden, Missy fills George in on what happened to Georgie today. George says it hurts to hear that, although Missy thinks it’s hilarious. When George goes to Georgie’s room to talk to him, Georgie is packing a bag so he can go to Alaska to work on a pipeline. George says that’s far away, but Georgie doesn’t think it’s far enough. Georgie says he’s never going back to that school, where everyone now calls him Lovey Cooper. George assures him it will get better. George tells him he’s a good-looking kid with a big heart and he won’t struggle to meet another girl, but Georgie is insistent he doesn’t want another girl, he wants Veronica.

Back at the university event after a few more rounds of drinks, Dr. Sturgis is offended when Dr. Linkletter tells Meemaw she’s as funny as she is beautiful. John accuses Dr. Linkletter of sweet talking his girlfriend and he doesn't dispute the claim. As Meemaw tries to extricate herself from the situation, Dr. Linkletter grabs her hand. John warns him to unhand her or there’ll be severe consequences. After they start shoving each other, Meemaw tries to break it up. As she drags John away, he wonders if she’s angry with him. Meemaw admits she’s more turned on.

As George tries to act cute with Mary in the kitchen, she’s still giving him the cold shoulder. When Meemaw wonders what that’s about, Mary says she’s punishing him. She says it’s over nothing really but admits that once she got started, she couldn’t stop. When the doorbell chimes, George answers the door to a group of men in hazmat suits, some of whom are walking around with geiger counters. George, Mary, Meemaw and the hazmat team open the garage door and find Sheldon disassembling smoke detectors. He wonders if he’s in trouble.