220 - A Proposal and a Popsicle Stick Cross 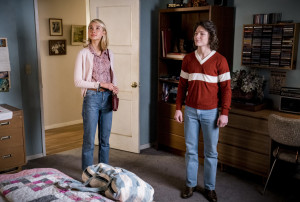 When Mary learns about Veronica's home situation, she invites her to stay at the Cooper house for a few days. Meanwhile, Dr. Sturgis plans a surprise for his one-year anniversary with Meemaw.

When Sheldon goes to Georgie's bedroom to see Veronica, he knocks on the door. As he has always done on Young Sheldon, he only performs two rounds of "[knock] [knock] [knock] name".

Sheldon: Are you wearing cologne?
George Jr.: No.
Sheldon: Georgie, I have the olfactory senses of a polar bear. They can smell a seal through three feet of ice.

Meemaw: John, I've already been married once. I wasn't really planning on ever doing it again.
Dr. John Sturgis: Why not?
Meemaw: I was somebody's wife for a long time. I just like being Connie Tucker now. Not Mrs somebody else's name.
Dr. John Sturgis: Well, what if I took your name? John Tucker, it sounds great. Like a football player or an astronaut.

Dr. John Sturgis: What's this? "Connie Tucker is proud to announce that she is sweet on Dr.
John Sturgis and they are officially a romantic couple." Oh, boy! I'm back in business!

Adult Sheldon explains a few things are guaranteed when you live in a small Texas town:  everyone will have chickens, everyone will know your business, but on the brighter side, people take care of each other. In a room at the church, Mary gives a sympathetic ear to Veronica Duncan. Back home, Mary goes out to talk to George as he drinks a beer. Mary explains she was thinking of having Veronica Duncan stay with them for a couple of days because she’s having a rough time at home. Her mother’s boyfriend has a drinking problem and things have been getting out of hand.

At the dinner table, Mary tells the family the news about their house guest. Georgie is delighted it’s Veronica, offering her his room and saying he’ll sleep on the couch. When Sheldon badgers Mary with questions about why Veronica is staying with them, Missy explains Veronica’s mother’s boyfriend is a drunk. Missy admits she overheard her parents talking about it outside.

Meemaw is following along with a Richard Simmons exercise video when her phone rings with a call from Dr. Sturgis.  John invites her out for dinner the next night, but doesn’t want to reveal where they are going. After Meemaw points out she’ll be the one driving them there, John admits it’s a Mexican restaurant. When Meemaw figures out which restaurant, John insists everything else will be a surprise.

Georgie tidies and cleans up his bedroom, taking down his Axl Rose poster and pictures of women. George takes a photograph of Georgie as he vacuums his bedroom, documenting an occasion that may not reoccur. When Georgie boxes up his dirty magazines and takes them out to the garage, he warns Sheldon not to open the box.

When Georgie walks through the living room, Sheldon can smell his older brother’s cologne. Sheldon tells Missy that Georgie is trying to attract Veronica by signalling his more attractive qualities. After the doorbell rings, Mary opens the door to Veronica, who thanks Mary for having her. Georgie takes Veronica on a guided tour of the house.

When Dr. Sturgis and Meemaw arrive at the Mexican restaurant, John says he has a reservation. As the waitress shows them to their table, Meemaw wonders if a reservation was really necessary, but John says he didn’t want to take any chances. When Meemaw goes to take a seat, John says he sits there and she sits at the other side. After Meemaw wonders what’s going on, John reveals that he’s recreating their first date together on its one year anniversary. Meemaw says happy anniversary.

Georgie shows Veronica around his room, which he has tastefully decorated for her. When Georgie points out the popsicle-stick cross he hung above the bed, Veronica gets teary-eyed. When Sheldon walks by and wonders why Veronica is crying, he bluntly asks whether Georgie mentioned her unfortunate home life as he’d been instructed not to. Staring at her intensely, Sheldon asks Veronica whether she is comfortable.

Back at the restaurant, Meemaw and John reminisce about their first date. Meemaw thanks him for a wonderful year and they toast to many more. John says that leads him to the final surprise of the evening. He gets up, goes over to her side of the table, and gets down on one knee. Meemaw asks what he’s doing, but John says he doesn’t want to ruin the surprise. Meemaw can see what’s coming as John pulls out a ring and says “Surprise!”.

Down on one knee, John asks Meemaw if she would do him the honor of being his wife. When Meemaw says she doesn’t know, John wonders how she can not know when it’s a binary decision. He argues they are compatible and enjoy each other’s company, not to mention they have become extremely proficient in the bedroom. After Meemaw asks him to sit back down and lower his voice, John needs a little help getting back up.

Mary says grace as the family and Veronica get ready to eat dinner. Mary says an extra special thank-you for being allowed to share their home with Veronica. When George and Mary ask Veronica about her plans after school, she explains she’s hoping to get a scholarship to Baylor so she can become a teacher. Veronica admits she likes kids, although Sheldon can’t see why. As Missy and Georgie quibble, Sheldon says this is the nonsense you have to put up with when you’re around children. Veronica says she loves this as her family doesn’t eat dinner together.

At the restaurant, Meemaw tells John she’s already been married once and she wasn’t planning on doing it again. She was somebody’s wife for a long time and just likes being Connie Tucker now. John argues it’s important for people to know they’re an official couple, but Meemaw says they don’t have to be married for that and could buy a billboard or take out an ad in the paper. After John says he understands, Meemaw asks if they’re good. John, holding back tears, insists they are. As he tells her he wants her to have the ring should he die before her, John starts to cry.

Sheldon knocks on Georgie’s door, asking for Veronica. After she tells him to come in, Sheldon hands her a print-out of his bathroom schedule. Sheldon explains he can’t speak for anyone else in this family, but she can count on the bathroom being occupied at those times. When Veronica asks if there’s anything else, Sheldon says there is but he’s not allowed to ask about it. Veronica insists it’s okay, so Sheldon asks why her father isn’t around. Veronica explains he left when she was really young and she hasn’t heard from him since. Veronica adds that she’s staying there because her mom’s new boyfriend isn’t very nice. Sheldon says he understands as his sister isn’t very nice. Veronica says she’ll talk to him later, but not during his bathroom hours.

When John and Meemaw return to her house, she offers to make a pot of tea so they can get cozy. After John says that sounds good, Meemaw tells him to make himself comfy while she makes the drinks. After Meemaw gets to the kitchen, she hears the front door slam shut. She rushes out to the porch and sees John cycling away.

As Georgie watches TV late at night, Veronica goes to ask if she can join him. He says sure and explains he’s watching Charles in Charge. As they joke about the show’s title, Veronica leans in and kisses Georgie. At that moment, a worried Veronica wakes up from the dream and thinks “Uh-oh.”

In the kitchen, Mary tells her mother she should marry John if she’s sleeping with him. Meemaw thinks she needs to find someone cooler to talk to and insists she doesn’t have to do anything because she’s “supposed to”. After Sheldon gets up, he asks how Meemaw’s anniversary date with John was. Meemaw is surprised he knew about that and wonders whether he knew about the proposal, too. Sheldon didn’t, which worries him as he thought he and John were closer than that.

As Veronica collects a towel from the bathroom, Georgie asks what she’s doing. Veronica explains she’s helping Mary with the laundry. When Georgie asks if they could go to the mall and hang out when she’s done, Veronica says she promised to spend some girl time with Missy. Meanwhile, Meemaw calls Dr. Sturgis but he lets it go to the machine. Meemaw tells him she knows he’s there and warns him she’ll be very mad if he doesn’t pick up. John just stares at the machine. Meemaw asks him to call her back and reluctantly hangs up.

As she and Missy eat ice cream at a service station, Veronica apologizes for this not being the most fun thing in the world. When Missy tells Veronica she’s “princess pretty”, Veronica isn’t sure but says Missy is princess material. When Missy laments the fact her mother won’t let her wear makeup until she’s sixteen, Veronica says that will be here before she knows it. Missy says it doesn't feel like it, but Veronica says she shouldn’t be in a rush. Veronica admits she would rather be Missy’s age again because being a grown-up is complicated. Missy suggests they try swapping places by making a wish, but nothing happens so Missy won’t get to drive home.

Back home, Missy begs Mary to let them “keep” Veronica, but Mary doesn’t want to participate in this conversation. When they are interrupted by the doorbell, Veronica answers the door to her mom’s boyfriend, Clint, who says her mom wants her to come home. When Georgie comes to the door to ask what’s going on, Clint says he’s taking Veronica home. After Georgie says she’s not going anywhere with him, Clint grabs Georgie. George walks by and asks Clint if he’d mind putting down his kid. After Clint repeats that he’s there to pick up Veronica, George asks her if she wants to leave with him. Veronica says no, so George thanks Clint for stopping by. After Clint asks George if he really wants to mess with him, George says why not.

In the kitchen, Mary hears a thudding sound. After she asks what’s going on, George her she might want to call the police as there’s a bum sleeping on their porch.

As John reads his morning newspaper, he turns the page and sees an announcement from Connie Tucker announcing that she and John are officially a romantic couple.