210 - A Stunted Childhood and a Can of Fancy Mixed Nuts 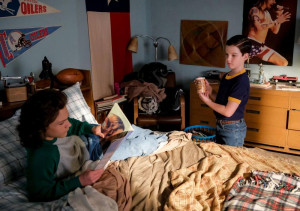 When Missy and Paige have a sleepover, Sheldon stubbornly refuses to join in with their childish fun. After Paige points out that a stunted childhood can cause people to become maladjusted adults, Sheldon tries to adopt a life of hi-jinks and shenanigans. Meanwhile, Dr. Sturgis decides to learn how to drive and asks Meemaw to be his teacher.

When Sheldon goes to prank Georgie with a can of "fancy mixed nuts", he knocks on Georgie's bedroom door. He performs two rounds of "[knock] [knock] [knock] Georgie!"

Sheldon goes to King Kong Comics to buy practical joke paraphernalia and is directed to a stand selling gag gifts from the Bazinga Novelty Company.

When Sheldon returns home and pranks his family members, he punctuates each gag with "Bazinga!"

Adult Sheldon: And that's how I became the madcap prankster all my friends know and love.

Paige: You know, I read that adults who had a stunted childhood often become social misfits and weirdos.
Sheldon: You didn't read that, you're making it up like your goat story.
Paige: Psychology Magazine, February issue, 1988.
Sheldon: Well, um, that doesn't make it true.
Paige: Guess you'll find out when you're an adult.
Sheldon: I guess I will.
Adult Sheldon: Well, we know how this story ends. I grew up to become a well-adjusted and charming fellow. But at that moment in time, she had me worried.

Dr. John Sturgis: Thank you for agreeing to the early-bird dinner. When I eat too late, the food just sits right here.
Meemaw: Yeah, gettin' old is no party.
Dr. John Sturgis: Oh, I've had this problem since I was ten. When I was in grade school, my nickname was Old Burpy.
Meemaw: Well, I will not be calling you that.
Dr. John Sturgis: You can if you'd like.
Meemaw: I'm good.

George Jr.: All right, I'm just gonna come out and ask it: what the heck is a colleague?

Mary: How do they feel?
Sheldon: My brand loyalty is being severely tested.

At a shoe store in the mall, Meemaw goes over to Mary with a pair of shoes. Mary questions whether the heels are a good idea as she’s already taller than John, but Meemaw says he likes that. When a sales associate goes to Sheldon to say they don’t have the Sperry loafers in his size but they do have Hush Puppies, Sheldon says he doesn’t wear Hush Puppies, he wears Sperry loafers. As Sheldon insists he can’t change his favorite brand, Linda and Paige walk over and say hello. When Mary explains that they’re having trouble getting Sheldon the brand he likes, Linda claims that Sperry is the same brand that Einstein wore. When Paige asks her mom if she and Missy can go to the Hello Kitty store, Mary agrees as long as they behave themselves.

As Mary drives the family home, Missy asks if Paige can sleep over this weekend. After Sheldon questions where she would sleep, Missy says she can sleep in Sheldon’s bed and he can take the couch. Sheldon refuses to change his sleeping quarters after changing his brand of loafers. Missy suggests he sleep at Meemaw’s house, but she says she has an important date this weekend. Missy suggests that Paige share her bed instead. When Mary asks Sheldon if he’s fine with that, he says yes trusting they will keep the noise to a minimum and  go to bed at a normal time.

That weekend, Linda arrives to drop Paige off. Paige finds Sheldon doing extra credit chemistry homework which she did the year before. Missy is excited that Paige has arrived and goes to hug her, prompting Mary to remark they’re sweet together. Missy wants Paige to go meet her dolls. Meanwhile, in Meemaw’s car, John thanks her for agreeing to the Early Bird dinner as he doesn’t like to eat too late. After he tells her he’s got a little surprise for her, John explains that he’s decided to learn how to drive so he can take on more of a macho role in public. Meemaw thinks he’s macho enough but she would enjoy not having to drive everywhere. Meemaw asks when he’s going to start to learn, he says as soon as she teaches him. Meemaw isn’t sure that’s a good idea, but John says it’s perfect. He teaches her science so she can impress Sheldon, so she can teach him to drive to impress her. Meemaw agrees but insists if they do it she is in charge. John will have to do what she says whens he says it, reminding John of how things are in the bedroom.

At a picnic in the garden, Missy and Paige drink tea while Paige tells her about the accidental origins of the drink. As the family eat dinner in the dining room, George asks Sheldon if the girls left him out of their little picnic. Mary says they invited him, but Sheldon says he wouldn’t eat outside as he’s not a hippy. When Georgie says he thought Paige was Sheldon’s friend, he insists she’s more of a colleague. After Sheldon questions why Paige is acting like a ten-year-old, Mary points out that she is a ten-year-old.

In Sheldon and Missy’s bedroom, Paige and Missy are using a paper fortune teller to predict the name of Missy’s future pony. Paige asks Sheldon if he wants his fortune read, but he can’t understand why a smart person would humor such nonsense. Missy accuses him of being an old man who doesn’t like to have fun. Later that night, Sheldon struggles to sleep as Missy and Paige giggle in the fort they’ve built over her bed. Paige invites Sheldon to come play with them, but Missy says it’s not a fort for old men. Later, Sheldon follows Missy and Paige when they sneak out of her bed. In Georgie’s bedroom, Missy and Paige tie a rope around his ankles so he’ll fall over when he tries to get up. When Sheldon refuses to be party to this, Missy again calls him an old man.

Back in Sheldon and Missy’s bedroom, as Paige tells a scary story, Sheldon picks the story apart. After Missy again calls Sheldon an old man, Paige mentions a study she read that suggests people who have stunted childhoods often become social misfits and weirdos. Adult Sheldon says we know he grew up to be a well-adjusted and charming fellow, but at that time Paige had him worried. After Missy calls Georgie to breakfast the next morning, he trips and falls as he tries to get out of bed.

In the school library with Tam, Sheldon reads the issue of Psychology Magazine that Paige was talking about. He admits there is ample evidence that a stunted childhood can lead to someone being a maladjusted adult. Tam remarks that he’s screwed as his childhood is all about schoolwork, playing cello and working in the family store. Sheldon vows to do something to it by goofing off, engaging in horseplay and, if time permits, being quite immature.

In the DMV testing area, John is being overly chatty with the other applicants, despite the instruction that there be no talking. Elsewhere, Sheldon goes to the backyard as Missy plays on the swing set. After asking to join her as she swings, Sheldon throws up on her. Back in the DMV parking lot, Meemaw guides John as he gets ready to drive. After John eventually starts the car, he accelerates forward at a glacial speed. Meanwhile, Sheldon arrives at King Kong Comics and tells Glenn he is hoping to buy some practical joke paraphernalia so he may behave childishly. Glenn points him towards a stand in the corner of the store, stocked with prank kits from the Bazinga! Novelty Company.

As John approaches a yellow light, he panics and doesn’t know what to do. Meemaw tells him to keep going, but he says yellow means slow down. Meemaw points out he’s already in the intersection. John screams as he slowly gets the car to the other side of the intersection and pulls over. John apologizes to Meemaw and says he doesn't think he can do this, but she says they’re only just getting started. John admits he’s finding driving to be very overwhelming as there’s too much information for him to process. John apologizes for letting her down, but insists he’s not letting her down. Meemaw says she loves him whether he can drive or not. John says “You love me?” and Meemaw replies “Well, I I suppose I do”. After John reciprocates the feeling, they agree to swap seats.

Back home, Sheldon offers his father a piece of gum. When George pulls on it, it sets a trap on his finger. Bazinga! Sheldon then goes to Georgie’s room to offer him some salted mixed nuts. Even though Georgie recognizes it as a trick can, Sheldon insists he open it. Sheldon screams when the snakes pop out of the can, although Georgie seems unfazed. Bazinga. Sheldon then phones the Sparks’ house to ask if their refrigerator is running. Bazinga.

As John and Meemaw kiss on her couch, her machine answers a call from Sheldon. Sheldon is flustered at getting the machine and meekly explains the prank he was about to pull. Bazinga. Back home, Missy tells Sheldon that was pathetic. He tells Missy he realizes he might not be cut out for a life of antics and shenanigans. After Missy says he’s going to grow up to be a weirdo, Sheldon admits he was hoping it would get easier as he grew up, but now he’s not so sure it will. When Missy sits down to comfort her brother, she sets off a whoopie cushion. Bazinga. Adult Sheldon explains that’s how he became the madcap prankster his friends all know and love.

At dinner, George asks Dr. Sturgis how his first driving lesson went. John describes the drama of the intersection incident. Sheldon, at least, finds the story scary. In lighter news, John mentions that their Meemaw loves him.