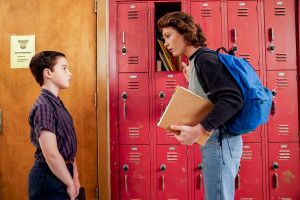 After Sheldon sees Georgie being pushed around, he strikes up a friendship with the bully and uses his new connection to boss his brother about. Meanwhile, Missy learns more about her mother's past when she steals Meemaw's makeup for picture day.

Sheldon: Excuse me, sir. When you're done urinating, I'd like to ask you some questions about social dynamics, intimidation, threats, et cetera. Finish up, no hurry.

Marcus: All right. Next. Missy Cooper.
Missy: Just a heads-up, this is my good side.
Marcus: Okay. Do your parents know you're wearing that makeup?
Missy: Oh, yeah, my mom knows.
Marcus: You sure? Because typically it's not allowed.
Missy: If you don't believe me, you can ask her.
Marcus: Okay, we're gonna give her a call.
Missy: Really?

Mary: What were you even thinking?
Missy: I was thinking I look hot.
Mary: You know you're not allowed to wear makeup.
Missy: That's why I didn't tell you.
Mary: And who gave it to you? Heather B.? Heather M.?
Missy: Meemaw.
Mary: So your grandmother was okay with you looking like this in your school pictures?
Missy: If you don't believe me, ask her.
Mary: Oh, I'm going to.
Missy: Really?

Sheldon: Good news, I just spoke to Tommy Clarkson.
George Jr.: What? Are you crazy?
Sheldon: Nope, Mom had me tested.

Adult Sheldon explains how fossils are formed over millions of years and how few organisms will be fossilised. How amazing that something so fragile can defy those odds only for this to happen to it: In Mr. Givens’ science class, Tam hits a fossil with a hammer and breaks it to pieces. After the bell rings, Mr. Givens says they’ll pick it up there tomorrow. When Sheldon sees Georgie being shoved against his locker by a bigger kid, Sheldon asks Tam to put his glasses away as he walks outside to see what’s happening. After the bully departs, Sheldon asks Georgie who it was, but Georgie replies “No one”. When Sheldon asks why he pushed him, Georgie says it’s none of his business. Sheldon wants to tell on him for violating the school’s student code of conduct, but Georgie insists he drops it. Six minutes later, Sheldon goes to see the bully in the bathroom to ask him about social dynamics, intimidation, threats, et cetera.

When the bully asks Sheldon what his problem is, Sheldon explains he witnessed an altercation between him and Georgie. Tommy realizes Sheldon is that smart kid he has heard about.. He wonders whether Sheldon is there trying to protect his brother. Georgie is Sheldon says no, he’s just curious about what Georgie did to incur his wrath. Tommy explains that Georgie is a punk who made a move on his woman. Sheldon understands that to re-assert his dominance Tommy threatened Georgie with physical violence. Sheldon admits he often intimidates people with his intelligence.

After the school photographer calls for Missy Cooper, he is surprised to see she’s wearing lots of makeup. When he asks if her parents know, Missy claims that her mother does and suggests he calls her if he doesn’t believe. Missy is startled when he says he will do that. Back in the hallway, Sheldon tells Georgie that he just spoke to Tommy. Georgie reminds his brother that he said to stay out of it. Sheldon points out he didn’t tell him the reason Tommy wants to “kick his bottom” is because he’s overly chummy with his girlfriend. When Georgie threatens to “kick his bottom” now, Tommy pulls him off Sheldon and says he doesn’t think so. As Tommy makes Georgie apologize to Sheldon, he can see that his older brother is intimidated by the bully.

As Mary drives Missy home, she asks her what she was thinking. Missy says she just wanted to look hot, but Mary reminds her she’s not allowed to wear makeup. When Mary asks where Missy got the makeup, she claims Meemaw gave it to her. Missy says if she doesn’t believe her, she should ask Meemaw. Missy is once again surprised when Mary says she’s going to do just that.

When Sheldon goes to the living room, a glum Georgie is watching People’s Court on TV. Georgie quickly answers Sheldon’s question of whether he’s angry with him, when he tells him to go away as he doesn’t want to see his face right now. Sheldon says he wants to watch Professor Proton, but Georgie says that’s too bad. Sheldon threatens to call his new friend Tommy to see how he feels about Georgie not letting him watch TV. As Sheldon starts dialing, Georgie gets anxious and decides to leave.

When Mary takes Missy to Meemaw’s, Mary asks her mother why she would give Missy makeup without talking to her first. Meemaw says she didn’t give her any makeup and tells Missy to come clean as she’s not taking the hit on this one. When Missy admits taking the make-up from Meemaw’s bag, Mary says she’s in a world of trouble. Meemaw tells her to calm down as it’s not that big of a deal, but Mary insists she will be punished. After Missy wishes she was Meemaw’s daughter, a hurt Mary decides to leave Missy with Meemaw for the night as she doesn’t feel like being around either of one of them.

Back home, when Georgie goes to the refrigerator as Sheldon works on his homework in the kitchen, Sheldon asks him to be a lamb and grab him a Yoo-hoo. After Georgie tells him to get his own, Sheldon wonders whether he really wants to be speaking to him in that tone of voice. Georgie has a had enough and tells Sheldon he thinks he’s real tough now but one day… When George interrupts their fight to ask what’s going on, Georgie says Sheldon’s being a jerk. Sheldon argues he only asked for a Yoo-hoo. As Georgie struggles to explain what his brother did wrong, Sheldon clears his throat and Georgie decides to drop it.

As Meemaw scrubs Missy’s makeup off, she asks when she swiped it. Missy admits it was when she was at bowling league. When Meemaw wonders how she got in the house when she doesn’t have a key, Missy says she can’t reveal that as she might need to do it again. After Missy asks how old her mother was when Meemaw let her wear makeup, Meemaw admits she didn’t really have rules like that. When Missy wonders why her mother’s such a dud, Meemaw says Mary wasn’t always like that and was once a wild teenager. Meemaw says Mary would even sneak out of the house and get into trouble with her friends before climbing up the tree at the side of the house to get back in. Meemaw asks if that’s how Missy got in, but Missy still refuses to reveal he show gained entry to the house.

As Mary angrily chops vegetables for dinner, George asks her if she’s okay. Mary says she’s fed up of being the bad guy around here. She feels like she’s the only one setting boundaries around here and then everyone resents her for it. George insists he’s on her side and has got her back. Just today, George says he broke up a fight between Georgie and Sheldon.

When Meemaw shows Missy old photos of Mary, Missy doesn't even recognise her cigarette-smoking mother. After Missy wonders when her mother stopped being cool, Meemaw explains that Mary turned things around when she gave birth to her. Not her and Sheldon, as he was delivered fine, but Missy in particular. There was a moment when Mary was delivering Missy that the doctors didn’t know whether she’d make it. Mary got so scared that she made a promise to God that if Missy was okay she start reading the bible, going to church, that kind of stuff. When Missy wonders if she’s the reason her mom’s a dud, Meemaw says her takeaway should be that she’s the reason Mary’s a good mom, which she is. Meemaw tells her to remember how much she means to her mother the next time she hurts her feelings, which she will.

As Sheldon strolls through the school hallway, Adult Sheldon says news of his new friendship with Tommy had apparently spread and the student body was finally treating him with the respect he deserved. The students would part to let Sheldon through, even when Tommy’s not around. Or when happens to be walking a few steps behind Sheldon.

Later, Adult Sheldon says that like Superman in a phone booth, he was not unused to undressing in his gym locker, but not today. His friendship with Tommy had given him the confidence to change in the locker room. After Coach tells the kids to go to the gym, Sheldon sees a bully blocking a fellow classmate from heading to the gym. Sheldon goes to ask him some questions about his use of intimidation to dominate others. When the bully turns to Sheldon and asks if he’s looking to get his ass kicked, Sheldon tells him he might want to unhand him as he’s friends with Tommy.

When Sheldon goes to see Tommy at his locker, he delivers the unfortunate news: Tommy is now scheduled to fight Jason on the basketball court at 3pm. Tommy doesn’t want to, but Sheldon says he might not have much choice. Back home, Mary asks Meemaw what she said to Missy as she was an angel this morning. Missy even hugged her mom in front of all her school friends. Meemaw says she just gave Missy a little life advice, general grandma stuff. When Mary says there she goes being the good guy again, Meemaw tells her she needs to know she’s doing a fantastic job with these kids.

As Sheldon and Tam eat lunch in the library, Tam talks about the curt note his mother gave him with his lunch. Adult Sheldon admits he was distracted worrying about the upcoming schoolyard fight between Tommy and Jason. Sheldon needed to find a way to intervene, but how? Out on the basketball court, Jason is clenching his fists as a crowd eggs him on.

Back inside, Sheldon runs through the corridors to the science lab. Adult Sheldon says he didn’t have the physical strength to help Jason in a fight, but he did have his once in a generation brain. Outside, the crowd is chanting “Fight” as Tommy shows up. As they get ready to fight, Sheldon yells “Stop!” as he gets between them wearing goggles. He tells Jason he’s not fighting Tommy, he’s fighting him. Sheldon asks Jason if he’s familiar with the biblical story of David & Goliath. Sheldon gives a speech and reveals he also has an air-based weapon: a rock and the elastic strap of his goggles. After Sheldon aims it at Jason and offers him one more chance to step down, Jason offers him the first shot. Sheldon takes it and lands the rock right between Jason’s eyes. As Jason screams out in pain and his anger flares up, Sheldon tells Tommy he’s going to run away.

Adult Sheldon explains that while conventional wisdom claims that when one stands up to a bully he will inevitably back down and respect you for your courage, his experience suggests otherwise. Jason didn’t beat Sheldon up, but he did stuff him in his locker.