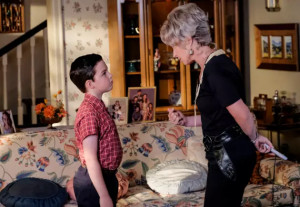 When Meemaw wins a video game console at bowling, a quest to save a princess quickly takes over her and Sheldon's life. Meanwhile, Georgie takes a part-time job at Herschel Sparks' autoshop, leading to conflict with George when he wants to drop football.

Adult Sheldon: I've fought many digital battles in my life, but none are as memorable as this first one with my Meemaw. By handing me the controller, she was telling me she believed in me. That inside my small, fragile frame beat the heart of a hero.

Mary: I don't know, I think his education should come first.
George Jr.: Come on, Mom. It's not like I'm gonna graduate "val-dictator-torian."

Meemaw: I'm Sheldon Cooper's grandmother and, uh, I need to take him out of school today.
Diane: Sure. What's the reason?
Meemaw: His Aunt Emelda's not doing well, and has asked to see him 'fore she goes.
Diane: Oh, I am so sorry. Does she want to see his older brother also?
Meemaw: Nah. She doesn't like him as much.

George Jr.: Too bad he didn't know Herschel. He can fix anything. Guy's a genius.
George Sr.: You mean a car genius.
Missy: Is Dad getting his feelings hurt? "Yes." The ball don't lie.

Adult Sheldon: Over the next few days, I ran to my Meemaw's house so we could save the 8-bit princess. And if it's unclear how important this was, let me say it again: I ran.

When Meemaw presents Sheldon with a video game console that she won bowling, he admits he doesn’t think video games are a productive use of his time. After Meemaw decides she’ll play by herself then, Sheldon is tickled by the idea of his grandmother playing video. In response, Meemaw tickles Sheldon and he agrees to play.

In Meemaw’s living room, she is bored as she waits for Sheldon to finally start the game. Sheldon insists on reading the instructions first. Meemaw is excited when he finally says he’s ready. Alas, he now wants to read the manufacturer’s warranty. Elsewhere, George and Georgie arrive at Herschel Sparks’ auto repair shop. George explains that the pick-up truck has been running hot. George is worried it will need a new radiator, but Georgie points out that the thermostat might not be opening right. Herschel is impressed by Georgie’s knowledge. When George wonders how his son knew that, Georgie reveals he took an auto repair class last year and surprisingly paid attention.

Back at Meemaw’s, Sheldon says they need to name their character. He suggests combining their names, Sheldon and Meemaw, and quickly comes up with Emelda Showmen. After Sheldon says it’s time to play, Meemaw is annoyed that she’s not in charge. Sheldon points out he actually read the instruction manual. Meanwhile, Herschel tells George that the problem was indeed the thermostat. After Herschel says it will only take 20 minutes to fix, Georgie asks if he can help and Herschel agrees.

As Meemaw urges Sheldon to kill the character,he’s struggling on account of his weak thumbs. After Meemaw asks if she can have a go, Sheldon offers to give her a tutorial but she wants to get right to it. As soon as she starts playing, Meemaw begins killing the other characters.

Back home, Missy asks a Magic 8 Ball if she will be a Dallas Cowboys cheerleader when she grows up. “Not likely” is its disappointing assessment. When Georgie comes into the kitchen, he asks his dad if he’s told Mary yet. Georgie tells his mother that Herschel offered him a part time job at the auto repair shop. George thinks it would be good for him, but Mary says his education should come first. Georgie points out he’s not exactly top of his class right now. Mary agrees he can take the job, so long as he is home for dinner every night and his grades don’t sleep. When George admits that Georgie really did know his stuff, Mary starts to think the job may be a good thing. Missy wonders if she’ll be a Houston Oilers cheerleader instead. The Magic 8 Ball responds “signs point to yes” and Missy predicts she’s going to marry a quarterback.

At Meemaw’s house after school, Sheldon is worried she’s about to lose a battle with a demon. As he freaks out about the prospect of having to restart the level, Meemaw pauses the game to set a few ground rules. Meemaw tells Sheldon he is in charge of mazes, puzzles and panic attacks, and she’ll take care of whooping monster butt.

That evening, over dinner, Georgie tells the family about his day at work with Herschel. Georgie says Herschel can fix anything, describing him as a genius. After Sheldon and Meemaw rush into the dining room, they apologize for being late and grab their food to back to Meemaw’s house. Later that night, Mary goes across the street to collect Sheldon as it’s past his bedtime. Sheldon asks Meemaw to promise not to play without him and she agrees.

As Mary and Sheldon return home, Herschel knocks on the door to ask George if Georgie could work tomorrow as one of his men called in sick. George isn’t sure as his son has football practice. When Georgie comes to see what’s going on, he instantly accepts Herschel’s offer. After George asks what that means for football practice, Georgie points out that he mostly sits on the bench all game. Herschel says he didn’t want to cause a problem  he will someone else. Georgie is unhappy that his dad cost him the opportunity to earn some money. When George asks if he really wants to quit football and go work in a garage, Georgie replies “Hell yeah”. George tells his son that it’s not his decision and he will play football, but Georgie says he can’t make him play football.

Even while he sleeps, Sheldon’s quest to save the princess continues. As Sheldon dreams he and Meemaw are 8-bit characters, he has an epiphany and instantly wakes up. Sheldon calls Meemaw to tell her they should use the piccolo to kill the cyclops. When Sheldon wonders how she got to the phone so quick, Meemaw lies and says she was on her way to the bathroom. Sheldon goes to the window to check and sees that Meemaw is up playing the game. After he calls her back to remind her that they’re a team and she promised not to play without him, Meemaw promises to turn off the game and go to bed.

As George drives him to school, Sheldon wonders where Georgie is. George says Mary is taking Georgie to school as he needed a break from him. Meanwhile, a tired Meemaw takes her morning paper and cup of coffee to the living room where she is suddenly tempted by the TV and games console.

At the high school, Meemaw presents herself at the main office to say she needs to take Sheldon out of school because of a sick aunt. As Meemaw drives him home, Sheldon is unhappy that she’s got him playing hooky. Back at school, Coach Wilkins asks George if everything’s all right as he didn’t see Georgie at practice. George says it’s not but doesn’t elaborate. He then gets annoyed that Coach Wilkins didn’t ask a follow up question. Coach Wilkins argues George shut him out and claims this is the sort of stuff he has to deal with from his wife. As the two men sit uncomfortably, George wonders if he’s really not going to ask.

Sheldon and Meemaw are having fun as they reach their final dungeon in the game. Meemaw asks Sheldon if he’d like to play the last battle. Meemaw starts yelling at Sheldon as the battle commences. Elsewhere, as George drinks a beer in his backyard, Herschel arrives with a six-pack of light beer to talk about Georgie and the football situation. Herschel feels bad, but George says it’s his fault. Herschel points out there’s upside to this as Georgie is a tire genius who has a clear future in the business. George is pleased to hear about his son’s talent and prospects.

Back at Meemaw’s, Sheldon and Meemaw complete the game and finally save the princess. A quick celebration is followed by the question of what they do now. Sheldon wonders if they just return to their ordinary lives now. Meemaw instead suggests they go to the store and buy another game. Sheldon’s lifelong fascination with video games had begun, but nothing would compare to his first quest with his meemaw.

At the auto repair shop, Georgie is sensually caressing a tire, asking it to talk to him. George and Herschel watch on in amazement as Georgie finds the leak.