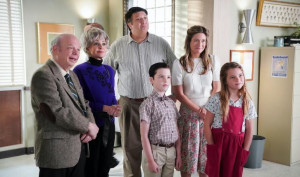 When Dr. Sturgis introduces Sheldon and Missy to university researchers studying twins, Sheldon's pleasure at having his intellect recognised is tested after they look at emotional intelligence. Meanwhile, George and Mary reconsider their parenting style when Missy's results surprise them.

George Sr.: Listen, why don't we just go there this Saturday and give it a try?
Mary: And if you don't like it, we don't have to do it again.
George Sr.: Or they'll love it, and they'll do it till they're 18, 19 years old.
Sheldon: I already love it.
George Sr.: My man. Missy? I believe there might be a Dairy Queen on the way there.
Missy: Can I get an Oreo Blizzard?
George Sr.: You know what I think? I think you're smarter than him.

Dr. John Sturgis: So, some colleagues of mine at the university are doing a research study on twins. I told them about Sheldon and his sister, and they were most intrigued.
George Sr.: Uh, what kind of study?
Dr. John Sturgis: It's a longitudinal investigation of environmental and genetic factors in the development of cognitive and other capacities in pairs of fraternal and identical twins.
Meemaw: You asked.

George Sr.: So, what's up? You comin' to me to ask for Connie's hand in marriage?
Dr. John Sturgis: No. But if that were to come to pass, are you authorized to bless the union?
Meemaw: He was joking.
Dr. John Sturgis: Oh.

Sheldon and Missy, despite being twins, have always been different. By the age of two, Sheldon liked to read books, while Missy liked to eat them. By age five, he appreciated a clean work space, Missy less so. Still, she did have qualities he appreciated. After Missy kills a spider with a shoe for him, Sheldon runs away when she points the shoe at him. Adult Sheldon says the bond between twins is an incredibly close one, which is why he moved 1,500 miles away to California the first chance he got.

When Meemaw and Dr. John Sturgis arrive at the Coopers’ house, George answers the door. Meemaw explains that John has something he wants to talk to them about, but George is more excited by the kolaches John brought. As he and Meemaw sit down at the kitchen table with George, John explains that some of his colleagues are doing a research study on twins. He told them about Sheldon and his sister and they were most intrigued. When John explains the twins would only have to answer some questions and do puzzle, George doesn’t think that sounds too bad, until he hears it’s in Houston. He has a change of heart when John mentions it pays 50 bucks an hour, five hours a week.

As Mary folds laundry, George tells her about the study. George points out the money they could earn is more than their mortgage payment. Mary is worried how Sheldon, already self-conscious about being different from other kids, would be affected by this. George argues Sheldon loves puzzles and tests. Mary also worries the tests will make Missy feel bad. When George says they could put the money aside for the kids’ college education, Mary decides to give it a try. After George says he’ll call John to say they’re in, he mentions under his breath that he’s getting a fishing boat.

At dinner, George tells Sheldon and Missy that he’s got exciting news for them. He explains that a couple of Dr. Sturgis’s colleagues are doing a study on twins and want to meet them. Sheldon is excited by the prospect of written tests, but Mary makes clear they don’t have to do it if they don’t want. Missy is reluctant as she thinks they’ll only be interested in why Sheldon’s so brilliant and she’s average. George suggests they go there this weekend jus to give it a try. Sheldon instantly agrees, but Missy is still reticent. After George points out there’s a Dairy Queen on the way, Missy accepts and he wonders if she isn’t actually the smart one.

As John sits with Sheldon and Missy, he says this brings back fond memories as he was also studied as a kid. When John mentions that Einstein was also thought of as an odd kid because he didn’t socialise and had extreme temper tantrums, Missy thinks that sounds like Sheldon. Meanwhile, as the doctors talk to Mary, George and Meemaw, Mary admits Sheldon avoids children his own age. George mentions his tantrums, but Mary is keen to downplay this aspect of his personality. Mary says Missy is just the opposite as she loves to be around people and makes friends easily. Mary says she doesn’t have temper tantrums, although George points out she is prone to biting if you get between her and her food. Mary is unhappy with the suggestion their daughter bites. When Dr. Thorpe asks if there was anything unusual about Mary’s pregnancy, she says not but George reminds her she cried for seven months. Seeing that Mary is keen not to give a negative impression, Meemaw tells the doctors they’re not going to get much out of Mary and George and should get cracking on the kids.

In one room, Dr. Pilson gives Sheldon a test and is surprised to learn Sheldon is already familiar with the tests. Sheldon reluctantly admits he enjoys a little light reading in the bathroom. In another room,  Dr. Thorpe tells Missy they’re going to test her problem-solving ability. Missy interrupts with a question about Dr. Thrope’s hair, then asks that the video camera is moved to capture her better side. Missy then asks whether she has any Oreos in her teeth, before giving Dr. Thorpe fashion advice.

George tells Mary, Meemaw and John to check out the TV as they watch live footage of the kids’ tests. Missy is still asking questions when she should be doing the test, while Sheldon is complimenting Dr. Pilson on the questions. When Missy tells Dr. Thorpe that the other doctor has a crush on her, Mary can’t watch any more and asks George to switch the TV back to Sheldon. After Meemaw gets bored of Sheldon mastering the questions, she asks them to turn it back to Missy, who is confused by the test.

At the end of the session, Dr. Thorpe and Dr. Pilson thank them for a great start. When Mary asks them if they enjoyed it, Sheldon says “Heck, yeah” as he got to take a test on a Saturday. Missy says the test was just okay, but she liked Sandra. After the family leaves, Dr. Pilson notices Dr. Thorpe is doing something different with her hair. She asks him if he would want to stop for a drink after work to discuss the test results, and he agrees.

Georgie is watching Soul Train when the family returns home. Outside, George is looking at a boat catalog when Mary comes to tell him she doesn’t like what the study is doing to Sheldon. George doesn’t understand as Sheldon had a great time, but Mary says he spent the whole ride home talking about how that doctor thought he was so smart. Mary doesn’t think it’s a healthy attitude. George wonders if it would help to know they made $300 today, but Mary declares she’s not interested in profiting off their children.

Back in Houston the next weekend, Dr. Pilson shows Sheldon a picture depicting a family of chimpanzees in a living room. When Dr. Pilson asks what Sheldon thinks is going on, he can only draw literal conclusions from the picture. Watching from outside, Meemaw worries they’ve found Sheldon’s kryptonite. When Missy sees the same picture and offers more social and emotional inferences, George thinks Missy won that round.

As Sheldon is shown a picture of a woman in a doorway, he fails to pick up any sense of what the woman might be feeling. Sheldon would prefer another question about trains going to St. Louis. Elsewhere, Missy continues to be very perceptive about the pictures she’s shown. After Sheldon grows increasingly agitated as he is shown pictures that mean little to him, he demands to know what the point of his exercise is. He lashes out when he hears this test is about “emotional intelligence”, claiming there is only one form of intelligence. Mary is upset as she sees Sheldon struggling.

Back with Missy, Dr. Thorpe says she is an insightful young lady, but Missy doesn’t know what that means. After Dr. Thorpe explains that it means she sees things that other people miss, Missy points out that’s amusing given “Missy” is her name. Missy says that when you’re on your own a lot you get good at seeing that kind of stuff. She thinks her dad and older brother are on one team because they do football together, and her mother and grandmother are on team Sheldon as they’re always fussing about him. Mary is upset to hear that Missy thinks no one is on her team.

As the family drive home from Houston, Mary says it’s a little late for her to start cooking and suggests they stop somewhere for dinner. George thinks that’s a little pricey for five people, prompting Meemaw to blab about his desire for a boat. After Mary asks Missy to pick the restaurant, Sheldon wonders why he doesn’t get to pick. Mary says it’s not just about him in this house. George kisses their per diem away when Missy picks Red Lobster.

Back home, Missy interrupts George and Georgie as they’re watching TV. She wants to talk with her dad about getting her fair share of the money they’re making from the study. When George asks her what she thinking, she says half. Missy asks George how much they’re making, and he answers that it’s $7.50 a week. After Missy demands half of that, George asks if she knows what half is. Missy asks him to hang on as she calls for Sheldon’s help.