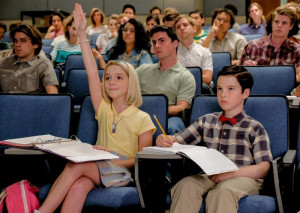 When Dr. Sturgis invites a brilliant ten-year-old girl, Paige, to audit his course, Sheldon is racked with feelings of jealousy. Meemaw decides to talk to John about Sheldon's situation, while Mary is excited to meet another family dealing with the pressures of raising a special child.

Dr. John Sturgis: Hello, Mary. This is John Sturgis, Sheldon's professor and your mother's lover.
Mary: Hi. And "John" was more than enough.

Adult Sheldon: Not since sharing a uterus with my twin sister have I been so unhappy sitting next to someone.

Dr. John Sturgis: See, this is why we're great together. You teach me about social etiquette, and I teach you about beaver anuses.
Meemaw: [CHUCKLES] It is magical.
Dr. John Sturgis: Did you know "ani" is also acceptable as the plural of "anus"?
Meemaw: And the magic continues.

After Meemaw drops Sheldon off at Dr. Sturgis’s class, she decides not to stay as she doesn’t really understand the material anyway. When Sheldon walks over to his usual seat, there’s a young girl, Paige, sitting in his spot. Sheldon wonders whether she’s there with an adult, but Paige explains that she’s been corresponding with Dr. Sturgis and he invited her to audit his course, too. Sheldon is not amused when Paige stumps him with questions about quantum chromodynamics.

As Sheldon sits next to Paige in the lecture hall, she asks how old he is. After Sheldon tells her he’s ten, Paige is too. Her March birthday makes her the youngest person in the class. After Dr. Sturgis arrives for the lecture, he’s pleased to see Sheldon and Paige have met. When Sheldon wonders why Dr. Sturgis never mentioned she was coming to this class, John admits he thought it would be a fun surprise.

On the silent car ride home, it’s clear to Meemaw that Sheldon is upset about something. After Sheldon admits he’s having an emotion he’s unfamiliar with, Meemaw thinks it could be jealousy over Paige. Sheldon doesn’t see what he has to be jealous about, but Meemaw points out Dr. Sturgis means a lot to him and is now lavishing attention on another brilliant young mind. Back home, as Mary folds laundry, she gets a phone call for John to say there’s a new student of Sheldon’s age in the class. Paige’s mother was wondering if he could put them in contact since they have so much in common. Mary eagerly agrees to take their phone number.

In the kitchen, Mary can barely contain her excitement as she tells George about another family with a child genius. Although George can’t really see the big deal, Mary is itching to call them right now. Meanwhile, as Meemaw and Sheldon arrive home, Sheldon is still complaining about Paige. After Mary breaks the news that Paige is coming over tomorrow, Meemaw makes a quick dash for the door.

As Sheldon paints his model train in the garage, Mary pleads with him to keep an open mind about Paige coming over. Mary thinks he might end up being friends with Paige, but Sheldon insists he already has a friend in Tam, and that’s more than enough. Sheldon wonders why his mother is worried about him when she doesn’t have any friends. Mary accepts that Paige didn’t make a great first impression, but Mary argues that could change. After all, he didn’t like Star Trek: The Next Generation the first time he saw the show, but Sheldon points out that Paige isn’t a TV show. Mary changes tack and tells Sheldon he was right, she doesn’t have many friends, which is why she was hoping to meet Paige’s mom. Sheldon falls for Mary’s guilt trick and agrees to think about spending time with Paige.

As Meemaw and Dr. Sturgis eat dinner in her kitchen, he’s busy talking about the disgusting, corporeal origins of a vanilla flavoring. Meemaw changes the topic to Sheldon and the hard time he’s having in John’s class. Meemaw explains that Sheldon is feeling jealous of the attention he’s giving to Paige.

While Sheldon watches the original series of Star Trek on the couch, Adult Sheldon admits the thought of spending an afternoon with Paige seemed excruciating to him, but he wanted to please his mother. Spock helps Sheldon realize he could rise above his emotions and tolerate spending a few hours with Paige. When Georgie comes to the couch, he quickly turns this “crap” over and puts Who’s The Boss? on instead. Sheldon tries to suppress his emotions as Georgie belches in his face.

The next day, Sheldon is getting ready when Marry announces that Paige and her family are there. Sheldon isn’t Vulcan so he can’t use kolinahr, but he does try to shove his feelings down so far they might be lost forever. Paige quickly runs over to hug Sheldon when he arrives in the living room.

In the living room, George offers Barry and Linda a drink stronger than iced tea. While he goes to get some beers, Mary talks to them about their jobs. When they say that Paige helps them with their bookkeeping, Mary mentions that Sheldon does their taxes. Mary and George are happy to talk with someone who also has a highly intelligent child. As they start to talk about Sheldon’s odd behaviors, they’re disappointed when Barry and Linda say Paige doesn’t really have any quirky habits.

As Sheldon takes Paige into his room, he says he’s created a list of activities to keep them occupied for the next few hours; they’ll start with a tour of his room, then board games, and then she can look at (but not touch) his trains. Paige seems more interested in the My Little Pony doll, which Sheldon explains belongs to his sister. After Paige says she shares a room with her sister and thinks it’s super fun, Sheldon declares she’s wrong.

As Mary prepares food in the kitchen, George tells her that this isn’t making him feel better about Sheldon. George thinks Paige sounds like a perfect child, but Mary insists Sheldon is perfect, too. Mary is still looking on the positive side of knowing another family in the same situation as them, but George thinks she’s just lying.

As Georgie and Missy spend time with Paige’s sister, Erica, in the garden, Missy wonders why grown-ups always stick kids together and expect them to be friends. Georgie and Missy tell Erica she has no idea how much it sucks to have a brother like Sheldon. Erica asks if Sheldon makes them feel stupid, but they insist they are smart in other ways. Georgie suggests they go throw rocks at an old TV he saw in the alley.

Sheldon proposes he and Paige play a variant of chess with a piece he invented. Sheldon is not impressed when Paige points out an obvious flaw in his game. Meanwhile, Paige’s mom talks about her daughter’s success in a spelling bee. Interrupting his wife, Barry tries to change the subject away from Paige. Linda mentions she used to work with Barry but had quit when her schedule with Paige got so busy. After Mary admits a unique child can require a lot of attention, Barry claims it’s all the attention. As Barry and Linda start quibbling, George encourages the discussion, saying they wanted to get together to talk about this kind of stuff. After George says it sounds like Barry feels left out, Barry admits he sometimes does and argues Erica does, too.

In an alleyway, Georgie is having trouble breaking the old TV’s screen with rocks, so Erica proposes blowing it up with a firecracker. When Missy runs off to get matches, Georgie asks Erica if she wants to make out. Back in Sheldon’s room, as he and Paige play chess, she asks if he actually believes in the multiverse theory. Sheldon says he very much does, but Paige thinks it’s a dumb theory. Still, Paige admits the debate is fun as she doesn’t get to have discussions like this with the kids at her school. When Paige asks if he ever wishes he was just like everyone else, Sheldon answers with a firm “Not at all.” Paige agrees and says she loves being smarter than everyone else. Sheldon starts to realize he and Paige have a lot in common, but the feeling is short-lived as Paige beats Sheldon at chess and claims proves she’s the smartest one. Sheldon flips the chess board over in anger.

When George comes to see Mary in the kitchen, he can’t hide his excitement at the bickering going on in their front room. George wants to offer Barry another beer to keep this going, but Mary thinks that’s irresponsible. When George argues she’s loving the fact Barry and Linda are as messed up as they are, she agrees to give him one more beer. When they hear an explosion from outside, George initially wants to ignore it and get back to the front room, but Mary makes sure he goes outside to check on the kids.

When Dr. Sturgis poses a question in his class, Paige raises her hand to answer. When she answers correctly, Dr. Sturgis starts to praises her, but he suddenly remembers Meemaw’s advice. John scales back his praise of Paige and instead commends Sheldon on his new bow tie.