209 - Family Dynamics and a Red Fiero 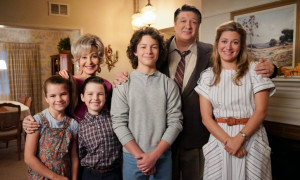 Sheldon takes a psychology class and is given an assignment to study his family over the Thanksgiving holiday. A disagreement breaks out between Mary and George after he considers uprooting the family and taking a job in Oklahoma.

Adult Sheldon: In tenth grade, high school students are presented with picking a class of their own choosing. This is called an elective. Courses on offer included wood shop, I'm happy with ten fingers, thank you; introduction to agriculture, I think you know the answer to that; wrestling, I'd rather milk that cow. All of which led me to the elective I reluctantly chose, Psychology 101, an investigation into why people think and feel the way they do.

Tam: Spending the Thanksgiving weekend working in my family's convenience store, I observed my father and mother working from 6:00 in the morning till 10:00 at night. My hypothesis was that economic advancement for immigrant families is more important than celebrating a holiday where people eat until they pass out in front of the TV.
Mr. Givens: All right, Tam. Well, based on your observations and hypothesis, were you able to make a prediction?
Tam: Yes. At some point, my father would die prematurely from stress. And my mother will come live with me, where she will constantly disapprove of my hot, blonde, American wife.
Mr. Givens: Okay. Uh, I think we all learned something there. Uh, thank you, Tam.

Meemaw: You want to tell me what happened?
Sheldon: Instead of remaining a neutral observer, I got emotional in front of the whole class.
Meemaw: Well, that's not a big deal.
Sheldon: Yes, it is. I'm a scientist. You never hear about Newton crying like a baby when he got brutalized by an apple.

Sheldon: Notes for psychology paper.
Missy: What you doing?
Sheldon: Shh. Family conflict has been observed. Subject M and Subject D have opposing views on relocating.
Missy: You better not be recording over my Janet Jackson tape.
Sheldon: Would you please?
Missy: Who's Subject M and Subject D?
Sheldon: I can't tell you that, you might skew the results.
Missy: Okay, then tell me what skew means.
Sheldon: Are you going to talk the whole time?
Missy: It seems to be annoying you, so, yeah.

Adult Sheldon explains that in tenth grade, high school students are given the power to choose a class. The choices included wood shop, introduction to agriculture, wrestling, none of which appealed to him. In Sheldon’s chosen class, Psychology 101, Mr. Givens says with Thanksgiving approaching, it’s a perfect opportunity to study family dynamics. Sheldon is possibly the only person in class to be excited about getting homework over the Thanksgiving holiday.

As George and Mary climb into bed, George says there’s something they need to talk about. After George explains that he has been offered a much better coaching job in Oklahoma, Mary can’t believe he would consider uprooting the family.George argues Mary should support his efforts to improve their lives. Meanwhile, Sheldon emerges from the bathroom and overhears his parents bickering over the job. When Sheldon returns to his bedroom, he sits down at his desk to records his notes. Missy, who is combing her doll’s hair, keeps interrupting.

In the kitchen, Dr. John Sturgis thanks Mary for inviting him to Thanksgiving dinner. John admits that he spent the previous Thanksgiving alone, eating a turkey sandwich. Outside, as George and Georgie toss a football around, George asks his son if he has any sentimental attachment to the town. Georgie suggests he’d be more than happy to move to Hawaii, because of Magnum, P.I., or Miami, because of the Golden Girls. John comes out to ask if he can join the throwabout. John impresses them with his ability to catch, but he’s unfortunately terrible at returning the ball.

Back inside, as they set the table for Thanksgiving dinner, Mary asks Meemaw to help her out. Mary wants her mother to express during dinner how bad she would feel if the family moved away and she couldn’t see so much of her grandkids.

At dinner, Mary says they should go around the table and say what they’re thankful for. Mary says she’s thankful for being surrounded by her family and goes on to list the benefits of where they live now. Meemaw piles on to say she’s so thankful that she gets to watch her grandchildren grow up. John is thankful to be there with this wonderful family, but Meemaw cuts him off as he starts recounting his unhappy childhood. Georgie is thankful for his job and Alyssa Milano.

When they finally get to George, he alludes to his job opportunity. Mary asks if they’re really going to have this debate now, but George claims she started it with all the talk about their neighborhood. Mary says she’s upset that George has been trying to twist the kids’ heads around to moving. Missy admits she blabbed. After George points out Mary got her mother involved as a stalking horse, Meemaw says of course she did as she doesn’t want to hear of them moving to Oklahoma. The kids are surprised to learn they could be moving there. After Mary ends the conversation and says they should just have a quiet dinner, George asks she’s just going to make the decision for him. When Mary says she’s doing it for all of them,  George storms off.

Later, as Meemaw comforts Mary in her bedroom, George and Missy can hear her sobbing as they watch TV. Sheldon is reading a psychology book on the porch when Dr. Sturgis comes to talk to him. Sheldon admits it’s been a rough day and says it might have been a mistake to choose psychology. Sheldon explains he was supposed to observe his family over Thanksgiving and form a hypothesis. Sheldon says he has observed his parents arguing about moving to Oklahoma. His hypothesis is that his parents’ marriage is a zero-sum game, what’s good for his father isn’t good for his mother, and vice versa. Sheldon tells John his prediction is that his father will make a meaningless symbolic gesture to exert his dominance. As John questions that prediction, George pulls up in a red fiero with REO Speedwagon’s “Take it on the Run” blaring. Dr. Sturgis tells Sheldon he will never question him again.

As George and Mary argue over the car, Meemaw and John gather the children to spend the night at her house. After John says he forgot something, he interrupts George and Mary’s fight to thank them for a lovely dinner. Later, George goes for a drive but doesn’t get far down the street before the engine blows.

As Mary serves up breakfast, she asks if the kids are excited to go back to school. Sheldon is, of course. When Sheldon asks where their dad is, Mary explains that he’s in Oklahoma for his job interview. Georgie asks if she really thinks they might move to Oklahoma, Mary admits she doesn’t know what to think.

At school that day, Tam gives his presentation to the psychology class. Tam observed his family working in the convenience store over Thanksgiving. His prediction is his father will die a premature death from stress and his mother will move in with him, disapproving of his hot, blonde American wife. Sheldon goes next and he tells the class about his parents’ argument and his father storming out. As he recalls having to spend the night at his Meemaw’s, Sheldon gets emotional and is unable to finish his presentation.

As Meemaw drives Sheldon home from school, she asks if he wants to tell her what happened. Sheldon is disappointed with himself for getting emotional in front of the whole class, rather than being a neutral observer. After Sheldon wonders why this is affecting him so much, Meemaw suggests it might be about his parents’ argument. Sheldon initially dismisses the idea this could all be about moving, but realizes he might be repressing his emotions about a potential move away from Texas. Seeing as he’s having an emotional crisis, Meemaw offers to take Sheldon to RadioShack.

At the University of Tulsa, Marty Steinbecker finishes giving George a tour of the campus. He says he could really use someone with George’s track record to train the special teams. George says he’s really tempted, but Marty senses some hesitation and offers George more money. After George insists the money’s fine, Marty asks if they have a deal.

As George arrives home, the whole family gathers to there to hear the news. After Mary asks what happened, George says he turned it down. He says it was because he doesn’t want to live in Oklahoma, although Mary doesn’t believe him. George insists it doesn’t matter as they’re not moving. Adult Sheldon admits as a child he didn’t understand the sacrifices his father made for his family, which made him somewhat less compassionate than he should have been. As a dejected George retires to his bedroom, the kids celebrate the fact they’re not moving.

In her kitchen, Meemaw asks John if they could do it one more time. He doesn’t want her to get tired of it, but she assures him that won’t happen. Meemaw throws a biscuit to John and is giddy at his unbelievable catch.