307 - Pongo Pygmaeus and a Culture that Encourages Spitting 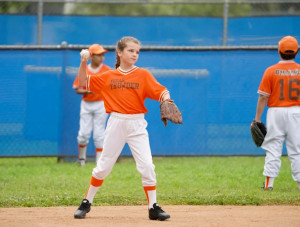 When Sheldon gets a modem, he starts a flame war on a physics discussion board. Meanwhile, Meemaw is concerned when George spends time with her new boyfriend, Coach Dale. And when Missy joins the baseball team, she experiences pushback both on and off the baseball field.

George Sr.: What's a modem do?
Sheldon: It allows me to connect my computer to other computers that also have one.
George Sr.: Why would you need to do that?
Sheldon: So I can share my scientific ideas with academics all over the world. It's like the cybernetic version of the Algonquin Round Table.
George Sr.: I don't know what that means.
Sheldon: That's okay, you're still my dad and I'm genetically obligated to love you.

Meemaw: I tried to call you last night; the phone was busy.
Mary: Oh, yeah, that was Sheldon.
Meemaw: Sheldon has friends he talks on the phone with?
Mary: Well, his computer was talking to another computer.
Meemaw: Oh. And the world makes sense again.

George Sr.: So how'd you wind up coaching baseball?
Dale: Well, with the sporting goods store, you know, I've sponsored a couple of teams, and then this year, my grandson wanted to play, so it lets me spend more time with him.
George Sr.: That's nice. Yeah, I coach my son in football.
Dale: Sheldon?
George Sr.: Oh, God, no. Can you imagine?
Dale: You really scared me there for a second.

George Sr.: Oh, yeah. Connie's great. You can have a beer with her, watch a football game, joke around. She doesn't mind if you swear. In fact, that woman's got a mouth on her.
Dale: I have noticed that.
George Sr.: Yeah. You know, I just realized something. I got more in common with my mother-in-law than I do my own wife.
Dale: That's kind of creepy.
George Sr.: Yeah. Let's hope the beer does its job and I don't remember this tomorrow.

Adult Sheldon: Thanks to Dr. Sturgis, I had all the intellectual ammunition I needed to bring my opponent to his knees. I accused him of conflating two different interpretations of quantum theory, woefully misrepresenting Paul Dirac, and when I called him a dung beetle in Latin, I was so riled up, I almost started producing testosterone.

When George takes Missy to baseball practice, he asks her if she’s sure she doesn’t want him to stay. Sheldon reminds his father that he promised to take him to RadioShack. Missy insists she’s fine, but George knows it’s a big day and he really doesn’t want to go to RadioShack. After George goes to see the coach, Dale tells George he thinks they got off on the wrong foot so he would like to take him out for a beer. Sheldon thinks it’s nice his dad is going to socialize with Meemaw’s new boyfriend. George agrees, knowing how much Meemaw is going to hate it.

After George takes Sheldon to RadioShack, he tells his father he’s getting a direct-connect 300 baud modem. George wonders what a modem does, so Sheldon explains it will allow him to connect to other computers with a modem so he can share his scientific ideas with academics all over the world. Sheldon describes it as the cybernetic version of the Algonquin Roundtable, but George doesn’t know what that means either. Sheldon tells George that’s okay as he’s genetically obligated to love his father anyway.

Back home, as the kids eat lunch in the kitchen, Mary asks Missy how practice went. Missy says the boys were a little mean at first, but she handled it. George takes the opportunity to mention he will be grabbing a beer with Meemaw’s new friend, Dale. Sheldon can see his dad was right, Meemaw is not happy.

Georgie is watching an exercise video on TV when he gets a phone call from Lisa, who in his English class. As Lisa asks for his help with her homework, Georgie’s phone call is interrupted by the screeching of a modem. Sheldon asks his brother to get off the line so he can use the modem. After Sheldon explains what a modem is for, Georgie says it’s the stupidest thing he’s ever heard of.

At an Italian restaurant, Dale asks Meemaw if she’s tried the meatballs there as they’re fantastic. Speaking of meatballs, Meemaw mentions Dale’s plan to hang out with her son-in-law. Dale senses she doesn’t like it, but Meemaw claims it’s fine. After he asks if she’s worried he’ll find out her secrets, Dale seems to enjoy how much it’s bothering Meemaw.

On his computer, Sheldon is happy to see someone responded to the theory he posted on a physics bulletin board, until he reads that the person described his work as flawed. Missy encourages Sheldon to show that he won’t be pushed around, that’s what she did at baseball. Sheldon doesn’t want to resort to name calling as that usually doesn’t work out well for him, but Missy points out that’s only in person when people can see he’s pathetic and weak. Convinced, Sheldon posts a cruel but perfectly grammatical retort.

In the kitchen, Meemaw tells Mary that she tried to phone last night but the line was busy. When Mary says it was Sheldon, her mother is surprised by the notion that Sheldon has friends he talks to on the phone. After Mary explains he was simply connecting his computer to other computers, Meemaw admits the world once again makes sense. When George goes into the kitchen, he reminds Mary, and especially Meemaw, that he’s gonna be late tonight as he’s hanging with his new buddy, Dale. Meemaw insists she’s not upset, but George knows she is.

On the computer in the school library, Sheldon shows Tam how to access the physics board on Usenet, claiming it’s easy. Tam tells him to be careful as Matthew Broderick in WarGames almost blew up the world, but Sheldon says he’s only interested in blowing up this guy’s flimsy argument. Elsewhere, when Missy arrives for class in her baseball uniform, a girl asks Missy why she’s dressed like a boy. After Missy explains she made the baseball team, the girl calls her a boy, prompting the girl and her friends to laugh at Missy.

Later that day, Missy tells Sheldon to get out of their room as she needs to change. Before he leaves, Missy asks Sheldon for his advice on being picked on. Sheldon says he usually takes comfort in the fact he’s so much smarter than them, but that won’t work for her. After Missy throws Sheldon out, Sheldon knocks on the door to tell her that sometimes he pretends he’s an ion with a positive charge and his bullies are an ion with a negative charge, so whatever they say bounces off him and sticks to them. Missy closes the door on him.

When Georgie stops to get his books out of his school locker, Lisa tells him she likes his denim jacket. As Georgie jokes around with Lisa, Veronica watches them from across the corridor. Georgie notices Veronica watching him, but she walks away when she notices he’s seen her. At the end of the school day, Georgie goes to Veronica’s car to make sure that they’re just friends. Georgie explains he wanted to make sure before he asked out another girl that there was nothing between them. Veronica says she needs to focus on her relationship to God right now. After Georgie says they’ll see each other around, a teary-eyed Veronica gets into her car and watches him walk away.

As George and Dale talk over beers at a bar, George asks what it’s like being single at his age. Dale says it’s great as he can walk around his house in his underwear and make whatever bodily noises he wants without anyone complaining. George admits he does that already. When George finally changes the subject to Meemaw, Dale wonders if she sent him there on a fact finding mission. George admits that, if anything, she’s worried that he will reveal her secrets. Dale suggests getting another round and getting to it.

Back home, Mary tells Missy she’s sorry those girls were so mean to her. Missy explains it was more than just calling her a boy; they wouldn’t sit with her at lunch or talk to her at recess. Mary suggests that if that’s what they’re like, Missy is better off without them as friends. After Missy says she doesn’t want to play baseball anymore, Mary says it’s her decision. When Mary gets a phone call from Brenda Sparks complaining that Missy is playing baseball, Brenda claims it’s not ladylike and that baseball is for boys. Brenda says it’s not just her, the other moms are starting to talk. Brenda wonders if having one weird kid isn’t enough for Mary and she is going for a record. When a furious Mary gets off the phone, she tells Missy she’s sticking with baseball.

Back at the bar, George tells Dale his mother-in-law is great as you can have a beer with her, watch a football game, joke around and she doesn’t mind if you swear. When Dale asks George about the man Connie was dating before, George describes John, saying he was a nice enough fella. After Dale asks why they split up, George is reticent to discuss the details, assuring Dale there’s nothing to worry about.

At home on his computer, Sheldon gasps as he reads the latest response to his theory. Sheldon calls up Dr. Sturgis for advice on the scientific argument he’s having. Sheldon admits it has already descended into name calling, having described his opponent as a Pongo pygmaeus [a Bornean orangutan]. Sheldon explains that the other guy is saying his probabilities come out negative. John argues negative probabilities can still have meaning and gives Sheldon another name to throw at the guy, Scarabaeus viettei [a dung beetle].

As George reads the newspaper in his backyard, Meemaw offers to top off his coffee. George realizes she just wants to know what he talked about with Dale. George assures her she has nothing to worry about as he didn’t say a thing. Meemaw thanks George, before moving on to ask him what he found out about Dale. Meemaw is disappointed when George can only tell her stuff she already knows.

As Missy warms up on the baseball field, George goes over to see Dale. When George asks if Missy is going to be okay out there, Dale says he talked to the other coach and the boys are going to leave her alone. Elsewhere, Sheldon is back on the computer to bring his opponent to his knees with all the intellectual ammunition he’d gathered from Dr. Sturgis.

When Missy steps up to bat, the crowd are stunned when the pitcher throws a hardball straight at her face that makes her duck. After another shot right at her head, Dale warns the pitcher. Having had enough, Missy throws down her bat and charges at the boy, tackling him to the ground before pushing his head in the dirt. As a concerned Mary pleads with George to do something, Missy keeps pounding on the boy with Meemaw and Dale’s encouragement. Meanwhile, Sheldon receives a rebuttal from his opponent, who concedes that Sheldon’s point has some validity. Sheldon dances in celebration, while Missy continues to beat up the boy.

As George, Mary and Meemaw drive Missy home, he’s proud of his daughter for being ejected from her first game. Mary wants to make clear they are not rewarding violence, but she is glad Missy didn’t let the girls from school bully her into quitting baseball. George and Meemaw can’t hide how happy they are with Missy’s show of force.