308 - The Sin of Greed and a Chimichanga from Chi-Chi's 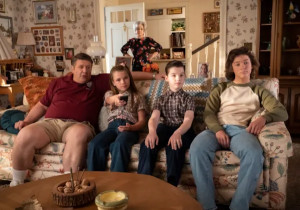 When the university notices how well Sheldon is doing in Dr. Sturgis's class, they want him to attend college classes and they offer George a job there to make it easier on the family. Meanwhile, Meemaw's new boyfriend, Dale, offers Georgie a job at his sporting goods store.

Fearing her husband and son are succumbing to the sin of greed, Mary is determined to take her house back from the devil.

Mary: Well, if it's everywhere, how can we fight it?
Pastor Jeff: We may not be able to control the world, but we can control our homes. It's up to us to create an environment where the sin of greed can find no purchase.
Mary: Is that what you've done in your home?
Pastor Jeff: Well, I do make my toast vertically, two slices at a time. Take that, Satan.

Sheldon: [answering phone] Cooper residence.
Dr. John Sturgis: Hello, Sheldon.
Sheldon: Dr. Sturgis. I'd love to talk to you, but I'm right in the middle of Star Trek: The Next Generation. It's a good one. Geordi goes missing, but Wesley Crusher has a plan to use neutrinos to locate him, since they'd be visible to Geordi's visor.
Dr. John Sturgis: I was actually calling to speak to your father. But I'm glad you're having fun with your friends.
Sheldon: Hang on. I'll go get him. Dad! Phone call!
Adult Sheldon: Even though Dr. Sturgis was confused, one day, Wesley Crusher really would be my friend. Neat, huh?

Dr. John Sturgis: Here we go.
Adult Sheldon: For many kids, Christmas morning was the most exciting day of the year. That's only because most kids don't know the joy of getting their college midterms back. It also didn't hurt that Dr. Sturgis looked like an elf.
Dr. John Sturgis: Nice work, Sheldon. Now, you'll notice that your grades are lower than expected. That's because Sheldon did so well, he broke the curve, turning your A's and B's into B's and C's.
Sheldon: They don't seem happy about it. Maybe you can give them candy.

Missy: Ooh. 35 cents off Goober.
Mary: What's Goober?
Missy: Peanut butter and jelly in the same jar. Think about how much time we'd save.

As Sheldon waits for Dr. Sturgis to hand out the mid-term papers, Adult Sheldon explains that this, not Christmas, was the most exciting day of the year for him. It doesn’t hurt that John looks like an elf. After Dr. Sturgis hands out the papers, he tells the class that Sheldon’s grade broke the grade curve, turning their A’s & B’s into C’s and D’s. Sheldon notices the other students don’t seem happy about it.

Dale shows Meemaw around his store, Ballard’s Sporting Goods, where he spends most of his time. When Meemaw mentions that her grandson wants some weights, Dale is puzzled by the idea of Sheldon lifting weights. Meemaw explains it’s her other grandson, the pretty one with the hair. Dale encourages her to send him by, saying he’ll give them the friends & family discount.

At home, Sheldon is watching TV when the phone rings. After he answers the phone to John, Sheldon says he’d love to talk but he’s watching a good episode of Star Trek: The Next Generation. John explains he was calling to speak to George, but he’s happy to hear Sheldon is enjoying spending time with his friends. Adult Sheldon says that although John was confused, Wesley Crusher would one day become his friend. When George picks up the phone, John invites him out for a beer and a talk. George is reluctant after last time, when John got drunk and threw up in his glove compartment. George comes around after John says the drinks are on him.

At a bar, John tells George he wanted to meet because the university has noticed how well Sheldon is doing in his college class and they want him to attend full time. George says they’ve been down this road before but Sheldon is only ten and with both him and Mary working, they just can’t make it work. John tells George that the university is willing to offer him a job there, so he could drive Sheldon and keep an eye on him. John also mentions they are willing to significantly increase his salary to incentivize him.

After George returns home, he is barely through the door before Sheldon starts grilling him about what he and Dr. Sturgis talked about. George says they talked about regular, non-science stuff, but Sheldon bets they talked about him. George tells him not everything’s about him and sends him to his room. When Mary asks what they talked about, George admits they discussed Sheldon. When George tells Mary about the university’s offer, she thinks college might be too much for Sheldon. George says he’d be there to look out for him and it couldn’t hurt to look at the offer. Mary argues that there are more important things than money.

After Georgie introduces himself to Dale in the store, Dale goes over to talk to a customer about a fishing rod. Georgie watches as Dale talks the man into buying a more expensive fishing rod, before giving him a tip to get his tackle at a shop down the street. Georgie is impressed and tells Dale he is a really good salesman.

Back home, Missy is helping Mary look for coupons in the newspaper. When Georgie goes to the fridge, Meemaw asks if Dale gave him a good price on the weights. Georgie says better, he gave him a job as a salesman. Georgie is excited to learn a lot from Dale. Mary congratulates him, although she doesn’t like the sound of it when Georgie says Dale knows how to get people to spend money on stuff they don’t need.

After taking a phone call in his office, George goes to tell Principal Petersen about the university’s offer. Principal Petersen says it’s quite a blow to lose him, but he means Sheldon, not George. Although he’s a royal pain-in-the-ass, Sheldon boosts the school’s test scores so much that school gets more funding because of him. When Petersen asks George what it would take to keep them happy, George promises to discuss it with his family.

As Mary, Meemaw and Missy prepare the table for dinner, Georgie arrives home from his first day at work. After Georgie learns they’re having meatloaf for dinner, he says that now he’s got money he can do what he wants, and he wants a chimichanga from Chi-Chi’s. Mary insists they will eat together as a family, but Georgie disobeys her and walks out. Mary warns Missy that the love of money is the root of all evil. At this inopportune time, George arrives home to tell his wife about the wheeling-and-dealing he did today. When an upbeat George suggests going out to dinner, Meemaw says Chi-Chi’s is good.

Principal Petersen gathers Sheldon’s teachers, Ms. Ingram, Ms. MacElroy and Mr. Givens, to talk about the situation. George Cooper is considering a job at a college and he’s taking Sheldon with him. The teachers are thrilled at the prospect of their most annoying pupil transferring, but Petersen points out the school’s test scores will drop precipitously and so will their salaries. Petersen asks them to do all they can to make George and Sheldon happy so they won’t think of moving.

When Mary goes to Pastor Jeff to ask her about a spiritual issue, she says George and Georgie might be succumbing to the sin of greed. Ever since Georgie started making money he’s been disrespectful, and George is so focused on getting a better job that he doesn’t care how it affects Sheldon. Pastor Jeff quotes Luke 12:15 saying that life does not consist in an abundance of possessions, but Mary fears the world is sending the opposite message. Pastor Jeff admits even he has been tempted by a toaster oven at Sears.

As George drives Sheldon to school, he tells his father about the episode of Star Trek: The Next Generation he was watching. When they reach the school building, George is surprised to see parking space with the sign “Reserved for Coach Cooper” right by the door. George says they’re finally starting to appreciate his talents around here, prompting Sheldon to wonder why.

That day at school, Petersen and the teachers go out of their way to treat Sheldon and George well. Ms. Ingram describes Sheldon as “My Man” by Ms. Ingram, Ms. MacElroy makes a point of handing out flyers with are evenly hole-punched, George gets a new desk chair, Mr. Givens shows Star Trek in school, George gets a golden whistle, and Principal Petersen gives Sheldon a key to the faculty restroom.

At home, Mary thinks Duck Tales is teaching Missy the wrong lesson. Mary notices Missy is eating “Goober”, which she says Georgie bought for her now he’s rich. Mary decides to take the house back from the devil. Mary goes around the house taking away the TV, the radios and Walkmans, Georgie’s tapes, magazines, Deviled Ham, and finally Missy’s “Goober”.

When George gets home, he wonders what happened to their stuff. Missy says Mom went nuts and took everything away. Geoge and the kids go outside and find Mary praying. After he asks her to explain herself, Mary says she’s taking the house back from the forces of the devil. Greed has entered their hearts, especially George and Georgie. George denies it and demands to know where their stuff is, but Mary isn’t telling.

George goes over to Meemaw’s house to tell her that her daughter has lost her mind and they want to watch TV. As the Coopers march in to her house, Meemaw says Dale is coming over. Meemaw goes over to Mary’s to say she doesn’t know what kind of religious gobbledygook she’s going through, but it’s starting to affect her. Mary says her mother’s not clean either as her boyfriend is encouraging Georgie to be obsessed with money. Mary says George is no prize either, not worrying about what’s right for Sheldon. When Meemaw asks Mary what she thinks is right for Sheldon, Mary says she honestly doesn’t know. She knows Sheldon is bored in high school, but he’s just so young for college. Meemaw points out it sounds like the university it trying to set George up there for him. Mary admits it might be her who is not ready for her baby to grow up. Meemaw understands, but says at some point you’ve got to let them go.

Adult Sheldon explains that Mary eventually relented and returned their things, with a few minor adjustments. Instead of Duck Tales, Missy is made to watch “The Moosewood Gang”, a religious children’s program. Georgie’s Black Sabbath cassette has been taped over with Jesus Christ Superstar. Adult Sheldon says his parents talked about it and decided 10 was too young for college, so he didn’t start until the ripe age of 11. In the meantime, he had the key to one sweet bathroom.

As Pastor Jeff stares longingly at a Black & Decker toaster oven at Sears, he asks the Lord to give him strength. He walks away, but rushes back to pick one up, apologizing to God for being weak.