305 - A Pineapple and the Bosom of Male Friendship 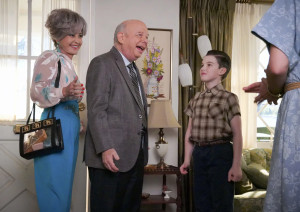 After Dr. Sturgis is released from the mental hospital, he abruptly breaks up with Meemaw.

Dr. John Sturgis: Well, I realize being here after ending my romantic relationship with Connie is unusual. So, as before, I'm perfectly happy to answer any questions that you might have.
Missy: I have a question. Can I eat in front of the TV?
Mary: Sure.
George Jr.: Let's get back to The Shining. When them elevator doors open, oh, man.

Dr. John Sturgis: [snoring]
Mary: What happened?
George Sr.: Oh, I had a few beers. He had one.
Missy: Seriously? We can't get a dog, and this guy's still here?

As Mary works in the garden, Meemaw walks over to tell her the good news that John is coming home on Friday. Meemaw says John sounded like himself on the phone and the doctors think it’s time for him to come home. While Meemaw insists she’s thrilled, Mary senses she’s a little nervous.

In the living room, Mary and George call Georgie to join Sheldon and Missy so they can have a little talk. After George tells Georgie to have a seat, Mary says he’s also getting talked to. Mary explains that Dr. Sturgis will be joining them for dinner and she wants to make sure they make him feel comfortable. For starters, they should avoid bringing up his time in the hospital and not stare at him during dinner.

While the rest of the family sit at the dining room table, Sheldon is looking out the window and giving a running commentary as Meemaw and Dr. Sturgis approach the house. After Mary lets John and Connie in, Sheldon is so delighted to see Dr. Sturgis that he offers his hand, sans mitten, for a handshake.

At the dinner table, John tells them how great it is to see them again. When John mentions how happy he is to have a home-cooked meal instead of hospital food, the kids don’t know what to say. John says he would understand if any of them felt uncomfortable about him being there after his time in the hospital and says he is prepared to answer any questions they might have. When Sheldon asks why he wasn’t allowed to visit Dr. Sturgis, he replies that he didn’t want Sheldon to be disturbed by some of the other patients. Georgie asks John whether he was confined to a room and Missy asks how he knew when he was better. When Georgie goes on to ask a question about The Shining, Meemaw says it’s one question each.

That evening at Meemaw’s house, she asks John if he would like a little nightcap. Meemaw is surprised when John says no as he’s got to ride his bike home, having assumed he would be spending the night. John realizes they’ve never really discussed the status of their relationship. Meemaw says as far as she’s concerned, they can pick up right where they left off, but John says he thinks it’s for the best if they don’t. Meemaw is stunned as John says he hopes they can still be friends.

After Meemaw asks John if she gets any say in this, he says no, explaining that if he’s single and has another episode, he only hurts himself. But if they’re together, it would also hurt her and he can’t do that again. When Meemaw points out she has patiently waited this whole time, John says that’s just more proof that she’s a wonderful woman who deserves someone she can count on. John goes as far as suggesting Ira from the furniture store as a potential mate. Meemaw is shocked that he’s acting as matchmaker. When Meemaw says she could phone Ira right now, John only encourages her. Ira is surprised to hear from Meemaw, but not as surprised as she is that John is eagerly pushing her to make the phone call.

In the Coopers’ kitchen, Mary tells her mother that it sounds like John had her best interests at heart. Meemaw insists men don’t break up with her, she breaks up with them. When Mary asks her if she’s going to go out with Ira, Meemaw says she doesn’t see why not. Mary doesn’t think it’s very nice to Ira.

As Mary folds laundry, Sheldon approaches her to ask if Dr. Sturgis will be coming over again as he would love to talk science with him again. Mary says she doesn't know what his plans. After Mary says Meemaw is busy and won’t be coming to dinner tonight, Sheldon wonders if she’s on a date with Dr. Sturgis and whether he could join them. Mary explains that Meemaw isn’t going to be with Dr. Sturgis anymore. Sheldon can’t see why he can’t invite Dr. Sturgis over then. Mary explains they’re working out their relationship and argues that it wouldn’t be a good idea to have John over. An upset Sheldon thinks it’s not fair that he found the one person in Texas who understands him and now he’s not allowed to see him.

Mary opens the door to a cheerful Dr. Sturgis, who wonders if Connie is okay with him being there. Mary tells him not to worry about it, or say anything to her about it. John gives Mary a pineapple, which he explains has been a sign of hospitality since the 1700s. Sheldon is pleased to see John again.

At a restaurant, Ira tells Meemaw this is an unexpected surprise as the last he knew, she was dating John. Meemaw says they’re no longer together so they don’t need to talk about John. After Ira questions how fresh this break-up is, Meemaw admits it was literally as she was on the phone with him. Ira is glad he was the first person she thought of. When Meemaw admits he was actually John’s idea, Ira is still glad.

At the dinner table, Missy is surprised to find John is joining them again. After Georgie wonders where Meemaw is, Sheldon explains that Dr. Sturgis and Meemaw are figuring out how their relationship is going to work. Georgie thinks it sounds like John got dumped, but George starts to say it was the other way around, prompting Mary to try to change the topic. John explains that his being there after the end of his romantic relationship with Connie is unusual and, once again, he’d be happy to field any questions they have. Missy asks if she can eat in front of the TV while Georgie asks about The Shining again.

At the restaurant, Ira asks Meemaw if he’s got this straight: her boyfriend gets back from the mental hospital, dumps her, and suggests she go out with him. Ira thinks it sounds like a spite date. Meemaw admits it doesn't sound so nice when you put it like that, but Ira is fine with it. Back home, Georgie asks John how relationships work for old people: do they find each other attractive when they wouldn’t have in their younger days? Mary takes George to the kitchen to propose he take John out to a bar because the children don’t need to hear about how attractive he finds their grandmother. George reluctantly agrees after Mary details what he would have to do if he stayed home and looked after the kids.

Back at the restaurant, Meemaw declares that’s enough about her and asks Ira what’s been going on in his life. Since they broke up, Ira has started playing tennis again, bought a telescope and tried Vietnamese food for the first time. Elsewhere, John tells George the etymology of the term “dive bar” as they enter a bar.

At home, as Mary tucks the kids into bed, Sheldon says he was worried that he wouldn’t see as much of John after the break-up, but he thinks they’ll be seeing even more of him now that he and George are best friends. Missy wonders how they can see less of him. After Missy explains she’s on Meemaw’s side, Sheldon admits he didn’t realize they had to take sides. Missy compares the situation to her friend’s parents’ divorce. As Ira and Meemaw get their desserts at the restaurant, Meemaw tells him how they used to source vanila from the anal glands of a beaver, a fact she learned from John.

At the bar, John tells George that Meemaw was his first girlfriend and will probably be the last. George tells him not to talk like that, but John is insistent that he’s damaged goods. He thought these episodes were behind him, but now he can’t risk having another and putting Connie through that. John thanks George for listening and promises he’s all ears if he wants to talk about any marital problems with Mary. George quickly changes the subject when he notices the pool table is free.

Back home, Missy asks Mary how many American Girl dolls she could get if she and George got a divorce. After Mary wonders if there are any questions that aren’t about divorce, Sheldon asks if it’s difficult to see her mother go out with men who aren’t her father. Mary admits it took some getting used to, but Meemaw is a grown-up and even though Pop-Pop passed away, she deserves to be happy.

At the end of their date, Meemaw thanks Ira for the evening. When Meemaw says they should do it again, Ira claims to be busy on Friday. And Saturday. Meemaw senses she’s getting blown off. Ira argues she’s still hung up on John and since he doesn’t want to risk getting his heart broken again, he’s going to respectfully pass. Meemaw is speechless. Ira is as surprised as anyone to realize he does have a shred of dignity.

Back at the bar, John tells George he played pool all the time in his under-grad days, claiming it’s just physics and geometry. George gets uncomfortable as John loudly talks about how funny life is; that a week ago he was in a mental institution and now he’s laughing it up in a dive bar. After John asks for everyone’s attention as he proposes a toast to George, he explains he’s going through a bit of a rough patch and George went out of his way to bring him here and listen to his woes. John talks about his break-up and explains how tonight he found solace in the bosom of male friendship. The bar is silent when John toasts George Cooper, until John says the drinks are on him.

The next morning, Mary gets up to find a snoring John asleep on their couch. George explains he had a few beers, while John had one. Missy is annoyed that they’re not allowed a dog, but this guy is still here.