304 - Hobbitses, Physicses and a Ball with Zip 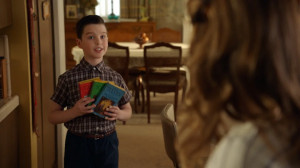 Sheldon tries to take his mind off a difficult science problem by reading "The Lord of the Rings", but this just leads to a whole new obsession. Meanwhile, Missy asks George to teach her about baseball so she can impress a boy at school.

Adult Sheldon: Having found no answers, I took it upon myself to rectify the inconsistent timeline in Lord of the Rings. J.R.R. Tolkien had a brilliant mind, but let's be honest. He was no S.L. Cooper.

Mary: Baby, you need to eat something.
Sheldon: But it looks like I can change the definitions of electric and magnetic fields and rotate the magnetic charge away mathematically to zero.
Mary: Maybe some fried okra would help.
Sheldon: Richard Feynman didn't develop quantum electrodynamics by filling up on fried okra.
Mary: Well, maybe that's because his mama didn't love him as much as I love you.
Adult Sheldon: Richard Feynman was Jewish. His mother didn't give him fried okra.

Meemaw: You just need a new hobby.
Sheldon: Very well. What are yours?
Meemaw: Smoking, drinking and gambling. But we can find you something almost as fun.

Sheldon: Ugh. What am I missing?
Missy: Wake me up one more time, and I will sneeze in your mittens. A big, wet, snotty one.

At a Texas Bar-B-Q restaurant, Sheldon is busy doodling on the paper tablecloth trying to solve unified field theory as his family wait for their meals. When the waiter arrives with their food and is unable to place it down on the table, the family switch to another table and leave Sheldon to work on his physics problem.

As everyone else dines at the restaurant, Mary takes a plate of food over to Sheldon and insists he eat something. Sheldon points out Richard Feynman didn’t develop quantum electrodynamics by filling up on fried okra. Sheldon doesn’t touch the food but does start biting his nails.

Later that night, as Missy tries to sleep, Sheldon wonders outloud what he’s missing as he read a textbook with the help of a flashlight. Annoyed at being awoken in the middle of the night, Missy tells Sheldon that if he wakes her up one more time she will sneeze in his mittens. The next morning, Mary finds Sheldon in the garage where he’s been working on the problem all night.

As George tries to fix a plumbing problem under the kitchen sink, Missy comes to ask if he would teach her to throw a baseball. After George questions what’s brought this on, Missy daydreams about a blond-haired boy at school playing baseball. Snapping out of her fantasy, Missy tells her father’s she’s not sure, baseball just seems fun. After George agrees, Missy runs off to get the gloves.

In Meemaw’s kitchen, she pours Mary a cup of coffee in her kitchen and asks her daughter what’s new. Mary says she’s worried about Sheldon as he’s not sleeping, he’s not eating, and he has started biting his nails. After Meemaw asks if he’s worried about something, Mary explains he’s fixated on a science problem. Meemaw is sure he’ll solve it and everything will go back to normal. After Mary asks what’s going on with John, Meemaw admits not much, explaining they write letters back and forth.

On the road in front of the house, George asks Missy whether she’s right or left-handed as he gives her a baseball mitt. When George wonders if she’s ever thrown a ball before, Missy admits she has only thrown rocks at Sheldon, but she did hit him every time. George teaches Missy how to throw the ball.

In the bathroom, Mary applies a band-aid to Sheldon’s fingertips to stop him from chewing his nails. When Mary points out this math problem is stressing him out, Sheldon is not surprised as Einstein struggled with it for thirty years without finding a solution. Mary suggests he take a break from science, but Sheldon panics at the thought of slowing down. When Mary insists he take a break, Sheldon wants one good reason why he should. After Mary asks him where Dr. Sturgis is right now, Sheldon accepts that’s a good reason.

As George and Missy throw the ball back and forth, Missy asks George for information about the Texas Rangers baseball team so can impress people with her knowledge. George asks whether this is about a boy, but Missy insists it’s not. George gives her some trivia about the Rangers to sound cool. Meanwhile, in the kitchen with Mary, Sheldon tells Meemaw that he’s so used to thinking about science that he doesn’t know how to stop. Meemaw suggests Sheldon just needs a new hobby.

In her living room, Sheldon joins Meemaw to work out to a Richard Simmons exercise tape. As Meemaw powers through, Sheldon eventually gives up. When Sheldon joins Meemaw at a bingo hall, he can’t help looking at the bingo cards and computing the odds in his mind. Later, Sheldon joins Meemaw at a bowling alley, where he’s concerned about whether other people’s fingers have been in the ball. As he gets ready for his turn, Sheldon visualizes the physics of knocking down the pins. After Sheldon rolls the ball, it slowly makes its way down the lane before coming to a halt after barely nudging the front pin.

In their bedroom that night, Mary asks George about the fun he and Missy were having today. When Mary asks what they were talking about, George says just life. Mary wonders if everything’s okay, but George insists everything’s fine. Mary realizes that he's not going to tell her anymore.

Back home, as Mary prepares dinner in the kitchen, Sheldon comes to tell her the good news: he’s found a way to take a break from science. Sheldon explains he’s checked out a fantasy book series called The Lord of the Rings. Mary is happy that it’s got “the Lord” in it.

As George and Missy toss a ball around outside, George tells her that her throw had some zip on it. Missy is happy to hear it looks like she knows what she’s doing. After Missy asks if there’s anything else she can say about the rangers, George tells her to tell whoever’s interested that no one will beat Nolan Ryan’s strikeout record. When Mary calls them in for dinner, Missy asks for five minutes. George is delighted that his daughter wants five more minutes with her ole dad.

In the dining room, Georgie asks Mary what his father and sister are doing out there. Mary says they’re bonding and it’s great, before quickly changing the subject. WhenMary asks Sheldon about the book, Sheldon tells them it’s excellent, describing how the character Gollum runs around naked and bites the heads off fish.

When Missy is once again woken by Sheldon in the middle of the night, this time he’s reading The Lord of the Rings and struggling with inconsistencies in the story. Missy throws a stuffed animal at her brother to shut him up, warning that next time it’ll be her shoe and she’ll put zip on it.

In Ms. MacElroy’s English class, Sheldon raises his hand to answer a question, just not the one she asked. Sheldon wonders if she’s ever read The Lord of the Rings. Ms. MacElroy says she has but that's not what they’re talking about, so Sheldon quickly answers her question and moves back to LOTR. Sheldon returns to the library to tell Ms. Hutchins about the inconsistencies in the timeline. Later, Sheldon goes to the comic book store to talk to Glenn about the minutiae of LOTR, who realizes this must be how he sounds to other people.

When George goes to Missy’s room to ask if she wants to throw the ball around, a crying Missy tells him to go away. When George asks if something happened at school, Missy insists she doesn’t want to talk about. George says okay and tells her if she changes her mind, she knows he’s there for her. As George turns around and starts to close the door, Missy says that the boy likes someone else. George walks over and sits on Missy’s bed, saying he’s sorry. When Missy says the girl doesn't even know who Nolan Ryan is, George argues this guy sounds like an idiot, but Missy says he’s perfect. George asks if she wants him to get Mary. Missy says no. George asks if she wants him to beat the guy up? No. George asks what can he do. Outside, George teaches Missy how to throw a curveball.

In the garage, as Sheldon tries to develop a consistent chronology for LOTR, Mary comes to check if he’s okay. He insists he will be once he’s finished this. Adult Sheldon admits that as hard as he tried, he kept running into roadblocks.Later that night, Sheldon dreams that he is both Gollum and Sméagol, who are arguing over whether their “precious” brain should be focusing on “physicses” or “hobbitses”. In their bedroom, Missy throws a shoe at Sheldon as he mumbles in his sleep.

When Sheldon goes to his parents' bedroom in the middle of the night, he tells his mom that he was Gollum and Sméagol, and he was in a cave fighting with himself over physics and hobbits, and then he realized that even though physics is frustrating, it won’t turn him into a tormented creature who bites the heads off fish. With that Sheldon says good night, leaving George to tell Mary he’s doing a great job with Missy so this one’s on her.

At school, when Missy sees the boy of her dreams talking to another girl, she removes an apple from her lunch bag, lines the shot up and throws it at the boy’s head.