303 - An Entrepreneurialist and a Swat on the Bottom 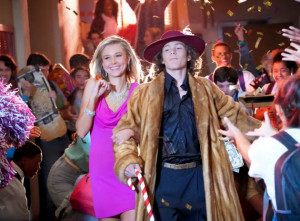 Meanwhile, Georgie tries to impress Veronica with expensive jewelry after he starts selling candy at school.

Sheldon: Hello. Am I correct that the bus to Dallas has a stop in Rusk?
Stan: Yup.
Sheldon: I'd like to buy one ticket, please.
Stan: You need an adult to buy it.
Sheldon: Oh, I didn't know.
Stan: That's the rules.
Sheldon: I'm just trying to visit my friend in the hospital. Not the regular kind of hospital, a psychiatric hospital. He's actually a brilliant scientist in the field of theoretical physics. Dr. John Sturgis, you may have heard of him. Anyway, he's a great guy. We're almost the same height... And then he and my meemaw became a romantic item, not that there haven't been bumps in the road. I actually helped them by writing up a relationship agreement. I love drawing up contracts. But I don't love drawing. Interesting. Anyway, he doesn't drive. Maybe one day he'll take a bus and you'll get to meet him. Anyway... Even though I'm clearly her favorite grandchild, she swatted my bottom. It didn't hurt that much physically, but emotionally, it stung like the dickens.
Stan: Here you go. One ticket to Dallas with a stop in Rusk.
Sheldon: But that's against the rules.
Stan: I'm an adult, I bought it.
Sheldon: Ooh, a loophole. Thank you. I'd tell you all about the etymology of the word "loophole," but I have a bus to catch.

Sheldon: Mom! Meemaw swatted me on the bottom!
Mary: What? Why?
Sheldon: I wanted something, and then she said no, and then I called her selfish, and then she went crazy!
Mary: Let me call her.
Missy: Really? You don't want to thank her in person?

Sheldon: State troopers. I wonder what they want.
Adult Sheldon: It turns out they wanted me. Fun fact, this was one of seven times I was brought home by law enforcement once, on the back of a horse.

Sheldon: Tam, I need help navigating a social situation.
Tam: I'm eating lunch with you. You think I have the answer?
Sheldon: Dr. Linkletter invited me to a lecture on robotics, but my meemaw said he's only doing it to spend time with her.
Tam: Are you asking if men do sketchy things to get dates?
Sheldon: Yes.
Tam: Well, then, I can help you. Absolutely. Last week, I told Jessica Geiger I was an extra in Karate Kid Part II.
Sheldon: Did it work?
Tam: Again, I'm having lunch with you.

Sheldon: That robotics lecture's going to be eye-opening. Get ready to forget everything you know about robot communication.
Meemaw: Moon Pie, I don't know if we're gonna go to this thing.
Sheldon: Why not? We've established that you're free, and I'm a child, so my schedule's wide open.
Meemaw: It's complicated.
Sheldon: Well, we're just sitting here, and we have to talk about something.
Meemaw: Can you just let this one go?
Sheldon: I think we both know the answer to that question.

Adult Sheldon explains that teachers have always been impressed by him, not just because of his intellect, but also his wicked sense of humor and his ready supply of fun facts, and Dr. Linkletter was no exception. After class, Dr. Linkletter makes a beeline for Meemaw and Sheldon to tell them a friend of his is giving a presentation next week on robotic communication. Linkletter suggests they could all go together if Connie is willing to drive Sheldon, who quickly says yes on both their behalves. Meemaw takes Dr. Linkletter aside to accuse him of asking her out in front of her grandson so she can’t say no, an accusation he doesn’t deny.

At home, George takes signs for a delivery from the Mountain View Candy Company, which he takes to Georgie’s room. When George wonders what it is, Georgie says it’s a big old box of candy and then closes the door on his father. On the drive back from Dr. Linkletter’s class, Sheldon insists Meemaw will enjoy the lecture. Meemaw tells him that they might not be going as there are grown-up dynamics at work. Meemaw explains she thinks Dr. Linkletter might be paying special attention to Sheldon so he can become better friends with her. When Sheldon admits his confusion as Dr. Linkletter knows she’s in a relationship with Dr. Sturgis, Meemaw says that’s the complicated part and urges Sheldon to drop it.

In the school hallway, Georgie approaches a student at the vending machine and offers him M&Ms at half the price. Meanwhile, in the school library, Sheldon asks Tam for help navigating a social situation. Tam can’t see why Sheldon would come to him, given he’s eating lunch with him. After Sheldon explains the situation between Dr. Linkletter and his Meemaw, Tam can confirm that men will do sketchy things to get a date.

Sheldon phones Dr. Linkletter from the school library, talking quietly to avoid disturbing any readers. Sheldon explains that his meemaw doesn’t want to take him to the lecture because she thinks he’s just using him to spend more time with her. After Dr. Linkletter asks what Sheldon thinks, he says his meemaw is wrong. Meanwhile, Georgie is still peddling his candy to his fellow students when he sees Veronica, who is impressed by his entrepreneurial spirit.

After Sheldon runs into the kitchen to tell his mom that Meemaw swatted him on the bottom, Mary says she’ll call her mother. Missy wonders if she wouldn’t rather thank her in person. Elsewhere, Georgie arrives at a jewelry store to get something special for a young lady.

Back home, George and Mary confront Sheldon about being rude to his grandmother. After Mary asks if Sheldon has anything he wants to say for himself, Sheldon says he really wanted to go to this lecture and he understands he upset Meemaw very much. After he goes onto ask which one of them will be taking him instead, his parents tell him no one’s taking him as he’s not going. After Sheldon accuses them of being even more selfish than Meemaw, he winds up in his bedroom telling Missy he’s been grounded for a month.

As Georgie sells his wares in the hall, he sees Veronica and tells her he’s got something for her. When Georgie pulls out a jewelry box, Veronica says it looks expensive. She can’t believe he spent $100 on her and insists she can’t accept the gift. George can’t understand it, but Veronica says he won’t impress her by throwing money around.

Adult Sheldon explains that the world no longer made sense: a grown-up had lied to him, he and his meemaw were at odds, and he was in trouble with his parents, so he had to find a way to restore balance. Sheldon goes to the living room to tell Missy he’s leaving, though she’s more interested in the television. Sheldon tells his sister he should be back tonight, but gives her a note detailing his whereabouts in case he’s not. Despite the instruction not to open the note until it gets dark, Missy opens it right after Sheldon leaves. He expected that and, to slow her down, has shrouded his destination in code.

When Sheldon arrives at the bus station and asks to buy a ticket to Rusk, the station employee says he needs an adult to buy a ticket. After Sheldon explains his predicament in extreme detail, the worker relents and buys Sheldon the ticket himself.

When Mary arrives home as Missy is watching TV, she asks where Sheldon is. Missy admits he left and she doesn't know where he went, handing her Sheldon’s note. Mary is stunned to know Sheldon left an hour ago, but Missy insists she told him not to go. Meanwhile, a woman asks Sheldon if anyone’s sitting in the seat next to him on the bus. After she sits down, she asks if he’s a little young to be traveling alone. Sheldon agrees but says he’s quite a capable traveler, who has memorized the entire schedule for the state of Texas.

As Veronica waves goodbye to her friends in the high school parking lot, she finds a jewelry box on her car. She’s initially annoyed at Georgie, but she reads the note that says it only cost ten cents. Inside the expensive looking box, Georgie put a candy necklace. Back home, Meemaw joins Mary in the search for Sheldon. Meemaw suggests the dots and dashes in the note could be Morse code. When George rushes in, Mary tells him her mother’s idea, but he doesn’t know Morse code either.

When Mary, George, Meemaw and Missy go to a library, Meemaw says there must be a book on Morse code in there. After George wonders how to find it, Missy says she knows how to use the card catalog. Back on the bus, as Sheldon’s seatmate tries to read a magazine, he asks if she had tuna for lunch or always smells like that. After Clara wonders who raised him, Sheldon says his mother, father and his meemaw. Clara remarks that they don’t seem like they’re doing a great job. After Sheldon admits it’s been quite the week, Clara knows she’ll regret this but goes on to ask how so?

At the library, Mary, George and Meemaw are working as a team to decode Sheldon’s letter. So far they’ve got “I am taking a bus. Fun fact about buses…”. Back on the bus, Clara asks Sheldon why he is going to see his professor friend. Sheldon explains he’s going to see John because before he left, everything made sense and it seemed like someone was on his side. When Sheldon confirms that the only person he thinks can understand him is in a mental hospital, Clara claims that’s the first thing he’s said that sounds right.

Back in the library, Meemaw has finally cracked the code. After she tells everyone Sheldon’s going to Rusk to see John in the hospital, George goes to call the police. On the bus, Sheldon insists he didn’t do anything wrong, but Clara says he did everything wrong and the only selfish person in his story was him. Sheldon mentions a Star Trek episode where miners thought the Horta was the monster, but it turned out the miners were because they were killing its eggs. After Sheldon notices State Troopers approaching the bus and wonders what they want, Adult Sheldon explains they wanted him.

In the living room, Sheldon plays the Star Trek episode for George, Mary and Meemaw. When it finishes, Sheldon tells his family he thinks they all understand why he wanted to show them this, but they don’t. Sheldon explains he was the miners, they were the Horta. After Meemaw suggests just saying “I’m sorry”, Sheldon says they’re really not getting this and decides to play the episode again.