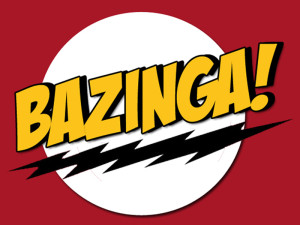 "Bazinga!" is an interjection Sheldon uses after practical jokes.

When Sheldon worried he wasn't living his childhood to its fullest in "A Stunted Childhood and a Can of Fancy Mixed Nuts", he went to King Kong Comics to buy practical joke paraphernalia. He was directed to a stand in the corner of the store from the Bazinga Novelty Company, based in Toledo, Ohio. The company's catchphrase was "If it's funny, it's a Bazinga!". Sheldon returned home and played a number of pranks on his family, punctuating each gag with "Bazinga!"

On The Big Bang Theory

Bazinga! was first established in the second season of The Big Bang Theory. The saying became something of a catchphrase for Sheldon, following sarcastic comments and his "classic pranks". Although there have been references to the saying in later seasons, Sheldon hasn't said Bazinga! since the fifth season.

Learn more about Bazinga! on The Big Bang Theory

Featured in these episodes: