311 - A Live Chicken, a Fried Chicken and Holy Matrimony 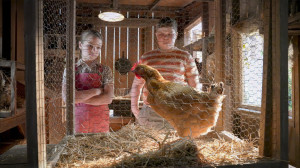 As Mary plans Pastor Jeff's wedding to Officer Robin, George Sr. and Meemaw team up to handle problems at home. Sheldon is upset with Georgie for taping over Star Trek: The Next Generation, Missy rescues Billy Sparks' chicken, and Georgie brings a girl home and takes her to his bedroom.

Adult Sheldon: None of my friends had recorded the episode. I called Tam. I called Dr. Sturgis. Those were all my friends.

Adult Sheldon: Fortunately, having a modem granted me access to an even better kind of friend: the kind you don't have to see or talk to.

Sheldon: Georgie, why are there bathing suit ladies where Captain Picard should be? Georgie!

Adult Sheldon: Many inventions changed people's lives for the better: the light bulb, the polio vaccine, and one that doesn't get enough credit, the home video cassette recorder. It didn't help keep people out of wheelchairs, but it did keep me from missing Star Trek.

Sheldon: I have a bone to pick with you, sir.
George Jr.: What'd I do?
Sheldon: You taped over my Star Trek episode.
George Jr.: So?
Sheldon: So, now I may never get to see it. What if it was a two-parter? I can't start a two-parter on part two. That's madness.

In his church service on Sunday, Pastor Jeff mentions that the bible says a lot about love. As he speaks, Pastor Jeff looks to Officer Robin who is sitting in the congregation. As Mary sees how Jeff and his girlfriend are looking at each other, she points it out to Meemaw, admitting she set them up together. Meemaw uses Mary’s hushed conversation as an opportunity to unwrap a sweet, prompting Sheldon to wonder why nobody is observing church etiquette.

As Pastor Jeff talks to his parishioners on their way out of the church, Billy Sparks asks if chickens go to heaven. Billy explains that his father wants to eat his chicken, Matilda. Brenda adds that it’s not as bad as it sounds, as Matilda has stopped laying eggs. When the Coopers get to Jeff, he asks to speak to Mary for a second. Pastor Jeff and Robin tell Mary they’ve decided to get married and were hoping she could help them plan a wedding for next Sunday. As they’re not allowed to be together as an unwed couple, time is of the essence.

When Mary returns home, she informs George that Pastor Jeff is getting married this weekend and she is in charge of planning the ceremony. Mary tells George she’s going to be extra busy, so she will need him to pick up the slack around the house. George can’t believe he’s paying the price for Pastor Jeff getting married, but Mary points out she’s only asking him to look after his own children. Elsewhere, in the Sparks’ chicken coop, Missy tells Billy that his dad can’t eat Matilda. Missy points out Billy raised Matilda from a chick, so she’s like a child to him.

As Adult Sheldon lists some of the world’s most important inventions, Sheldon goes to the living room to the VCR to put on his tape of Star Trek: The Next Generation. Unfortunately, as he sits down to watch the show, it becomes apparent somebody taped over it with Baywatch. When Sheldon goes to confront Georgie, his father explains he’s not there. After George turns down Sheldon’s suggestion that he drive him to the television station in Houston to find a tape of the episode, Shedlon admits he’s very unhappy. Peeved even. So angry he would slam the door right now, if it wouldn’t startle him.

At Pastor Jeff’s house, Mary talks to him about his wedding plans. He explains that Officer Robin couldn’t be there as she’s working extra shifts so she can take some time off after the wedding. When Mary wonders where they plan on going on their honeymoon, Jeff says they aren’t planning on leaving the bedroom. As Mary quickly turns to the wedding details, it’s clear Pastor Jeff is aiming for the bare minimum. Jeff explains it doesn’t have to be big as he’s been married before, but Mary points out that Robin hasn’t.

Back home, Sheldon has called all his friends to see if they taped the Star Trek: The Next Generation episode. Tam and Dr. Sturgis had not. Those were all his friends. Thankfully, he had Internet access to a better kind of friend, the kind you don’t have to see or talk to. As Sheldon types away on his computer, he hears a chicken cluck. Sheldon nervously walks over to his closet, pushes the clothes apart and is stunned to see a chicken. As Sheldon stares at the bird, it clucks and then flies out of the closet towards him. Sheldon bolts out of the room and quickly shuts the door behind him.

Out in the hallway, Sheldon asks Missy why she would bring that pecking, poop machine into their house. Missy explains she was just trying to save the chicken’s life. When George returns home with lunch, Sheldon complains that his sister put a chicken in their room. George, carrying a bucket of Kentucky Fried Chicken, wonders what’s going on. Missy is offended by George’s choice of food and grabs the chicken from her father before running into the bathroom. Meanwhile, Mary and Pastor Jeff are out shopping for a wedding cake. Pastor Jeff is stunned by the price tags, but Mary insists he can’t skimp on the cake as it’s the focal point of the entire wedding. Mary starts to get worked up as Jeff doesn’t share her sense of how important the wedding festivities are.

Back home, George has drafted in Meemaw to help deal with the kids. He explains the situation: Sheldon’s mad at Georgie for taping over his space show but now he’s hiding in the garage because Missy brought home Billy’s chicken, and Missy’s hiding in the bathroom because he brought home fried chicken. Meemaw says good luck and turns around.George begs for Meemaw’s help, explaining Mary is out planning Pastor Jeff’s wedding and left him in charge. As Meemaw agrees to help and split the tasks, Georgie returns home with a girl and takes her to his bedroom. Meemaw tells George she’ll take the chicken problems and leave the girl problem to him.

At a wedding dress store, the sales woman asks Mary if she’d like to try it on. Mary admits she’s not shopping for herself, even though she knows she would look like a princess in the dress she’s admiring. After Pastor Jeff finds a tux, Mary suggests they look for a wedding dress for Robin. Just not the one that Mary was admiring.

Back home, Meeemaw asks Missy to come out of the bathroom. Missy insists they’re not eating the chicken, wondering if it was Matilda’s friend. Meemaw points out that the chicken is from Kentucky, so they wouldn’t have known each other. When Meemaw questions why George isn’t in his son’s bedroom, George claims he’s just thinking about what to say. When George finally goes to talk to his son, he tells Georgie to keep the bedroom door open and sit on the floor, not the bed.

George returns to Meemaw to say mission accomplished, he asked them to sit on the floor. As Meemaw asks if George has had “the talk” with Georgie, George doesn’t want to even have this talk. Meemaw says it’s important he knows about protection, else he might get that poor girl pregnant and ruin her life. George wonders if that’s a shot at him, prompting Meemaw to ask if he got her daughter pregnant and ruined her life. George insists Mary is happy with her life. But at that very moment, Mary is crying at the bridal store while holding a wedding dress in front of the mirror. Mary tells Pastor Jeff that Robin’s going to love it. She’ll have the perfect wedding of her dreams and won’t have to wear the only dress that fits her because she’s trying to hide the fact she’s pregnant.

Back in the kitchen, George points out it takes two people to get pregnant, but Meemaw wonders if Georgie knows that. Sheldon enters the kitchen in his astronaut costume, asking whether the chicken is still in his closet. Meanwhile, Missy runs out of the bathroom as it floods.

Later, as he works to unblock the toilet, George wonders if he’s being punished and is a bad person. As Meemaw and Missy walk out the house with Matilda, they tell Sheldon that they’re taking her home. When Georgie comes out to ask them to keep it down, Sheldon tells his brother he has a bone to pick with him for taping over his Star Trek episode. After Jana tells Georgie she’s going to go home, Sheldon talks to her in Spanish, as she’s in his class, but she doesn’t have a clue what he’s saying.

Back at the wedding dress store, Mary apologizes for making this wedding all about her. Mary says every bride dreams of walking down the aisle, but she never got to have that. Mary explains that she became a wife and a mother overnight, so she feels like she missed out on a lot of stuff. Pastor Jeff says he and Robin talk a lot about how they admire Mary and her family. He points out that while their marriage may have gotten off to a rough start, if that’s what it took to get them where they are, maybe God knew what he was doing. Mary is grateful and offers to get back to the wedding, but Pastor Jeff declines, saying even though she’s a great wife and mother, she stinks at this.

George and Meemaw go into Georgie’s bedroom to give him the talk. George begins by telling Georgie that he’s at an age where he’s starting to get urges. Georgie is horrified about the thought of getting this talk, not least from his father and grandmother. When George asks who he’d rather hear this from, Georgie says his dad, he guesses. As Meemaw leaves, she overhears a man’s voice and finds Sheldon watching TV with a strange man.

In the living room, Meemaw asks Sheldon what’s going on here. He explains he found Nathan on a Star Trek bulletin board and he brought over a tape of the episode. After Meemaw asks the man to leave, Sheldon says he needs to see the episode to the end. Back in Georgie’s room, George tells his son that while Mary would prefer him to say that he should wait until marriage, he knows he’s probably not going to. The important message is, just like when they’re running practice drills, to wear protection.

With Meemaw now sitting between Sheldon and Nathan, he finally sees the end of the Star Trek: The Next Generation episode. After Sheldon says it was excellent, Meemaw tells the guy to get out. When George comes out, he wonders who the man is as well. Sheldon explains Nathan has been to four Comic-Cons, while Meemaw adds that he’s leaving. After Meemaw tells the guy to beam his ass out of there, Nathan stands up and beams away. Adult Sheldon admits that didn’t actually happen, but it would have been neat.

At the church, Pastor Jeff and Officer Robin finally have their wedding ceremony. An emotional Mary and her family watch on in the congregation. After Pastor Jeff is told he may kiss the bride, the kiss goes on a long time, outlasting everybody’s applause.