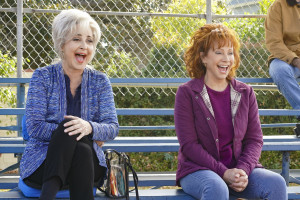 Meemaw: All right, come on, let's talk about something else.
June: Okay.
Dr. John Sturgis: A lot of people here like to talk about the game.
Meemaw: Really? You speak sports now?
Dr. John Sturgis: I sure do. Check this out. Hey, ref! I suggest you go back to referee school and this time pay attention in class!
Man #1: You tell him, Doc.

Mary: How about you all come work at our house?
Sam: I guess if that's our only option.
Mary: It'll be fun. I'll make food. You can even bring your laundry.
Keith: That actually would be great.
Sheldon: Now this man's soiled underpants will be in my kitchen. Thank you.

June: [answering phone] Hello?
Dr. John Sturgis: Hi, June. John Sturgis here. We met the other day. I'm, uh, the scientist who won over the whole bar.
June: Oh, sure, I remember you.
Dr. John Sturgis: Good, good. Anyway, I was wondering if you had any romantic interest in me.
June: Well, you don't beat around the bush, do you?
Dr. John Sturgis: In medieval times, hunters used to hire men to beat the area around bushes with sticks in order to flush out game, so no, I guess I don't do that.

Keith: How about we work in my dorm tomorrow?
Mary: Um, I don't know if a dormitory is the right environment for someone his age.
Sheldon: If you're worried about the beer-drinking, Dad has thoroughly desensitized me.

After a woman sits down beside Meemaw in the bleachers and asks whether the baseball game is running late, Meemaw explains the Sparks’ kid got himself trapped in the bathroom. As Meemaw laughs that Billy was pulling on a push door, June claims that Billy is her grandson. Meemaw feels terrible and decides to stop talking, until June admits she’s joking. When June goes on to say that her grandson is actually Evan, Meemaw realizes that would make her Dale’s ex-wife. After June questions why that matters, Meemaw says no reason.

Adult Sheldon explains he had an aversion to any type of groups when he was growing up. He mentions rock groups and group costumes, but of all the groups he didn’t like, the worst was group projects. In the lecture hall, Dr. Sturgis’s class groans as he announces their next assignment will be a group project.

Back at the baseball field, when June says this would be more fun with margaritas, Meemaw asks what isn’t. When June suggests they go out for a drink sometime, a nervous Meemaw accepts but first reveals that she’s dating Dale. June questions why she waited that long to tell her, saying Meemaw is sneaky but she likes that. June admits she knew all along, that’s why she came over here. Meemaw says nicely played and agrees they’re still on for drinks.

After the end of his class, Dr. Sturgis is talking to Sheldon and two other students, Keith and Sam. After Sheldon asks why he can’t do this alone, Keith says he’s the one who should be upset having been paired with a kid. Sam asks if she can switch groups, but John says no as it’s important for scientists to learn how to collaborate. When Mary arrives to pick Sheldon up, Sheldon explains that Dr. Sturgis is forcing them to work together. Mary suggests they all go work at her house, she’ll make food and they can even bring their laundry.

As Meemaw and Dale return to her home with groceries, Dale says he can’t understand why she wants to hang out with June. Meemaw says she seems like fun. Dale agrees she is, until you marry her. When Dale asks if she doesn’t think it’s weird to hang out with his ex, Meemaw points out he went camping with John. Dale says it was weird. When Dale asks if she’s going to dig up dirt on him, Meemaw says yeah. Dale shares some stories from his marriage, but Meemaw bets June will tell them better.

Back home, Missy is excited to see Mary serving up a batch of chocolate chip cookies. Mary lets her have one but says the rest are for Sheldon’s friends. After Georgie asks Missy if she’s ready to go, Missy tells her mom they’re going to the mall. Mary asks what happened to asking for permission. Missy says she asked her dad, but Mary argues that doesn't count. Later, Keith and Sam arrive to study with Sheldon. Keith brought a bag of laundry, but Sam insists she can do her own.

At a bar, Meemaw is already nursing a drink when June arrives. After June compliments Meemaw’s dress, Meemaw admits she changed her outfit three times. She’s never had drinks with her boyfriend’s ex before. She wondered whether to try look hot or look like she wasn’t trying. June says she must have chosen hot, but Meemaw insists she wasn’t even trying.

In the Coopers’ dining room, Sheldon, Sam and Keith can’t agree on a scientific theory. Keith asks Sam to write on the board, assuming she has nicer handwriting. Back at the bar, Meemaw says they’ve covered football and grandkids, so she wonders what they have left out. Then Meemaw remembers: June’s ex-husband. After June asks Meemaw what she wants to know, they chat about the time Dale locked June out of the house during a hail storm. June adds that she was naked at the time after trying to hit Dale with a golf club. Their conversation is interrupted as the bar erupts in cheers as John walks through the door.

After John notices Meemaw sitting at a table, June wonders how she knows a guy like John. Meemaw admits they used to date. June can’t believe Meemaw dated both John and Dale, saying she must not have a type. When John goes over to talk to Meemaw, he says the bar is where he hangs out now. He grades papers, chats with the other patrons, and football fans rub his head for luck. Meemaw introduces Dr. Sturgis and June, explaining that she’s Dale’s ex-wife. John points out he is Connie’s ex and asks whether this is fun or weird. Meemaw simply says yeah.

Back home, Sheldon and his classmates are tense and taking it out on eachother. When Keith argues they’re not getting anything done, Sheldon blames Keith’s pacing around the room. After Keith accuses them of not helping, Sam points out she is writing in her “prettiest handwriting”. When Mary brings them some food, Keith goes to get coffee and Sam decides to smoke a cigarette out on the porch. Sheldon tells his mother it’s going great now those two are gone.

At the mall, Missy is worried when she sees Marcus, the boy she has a crush on and who inspired her to join the baseball team. Georgie thinks she’s a little young to be liking boys. After Missy asks how old Georgie was when he started liking girls, Georgie insists he was way older. Missy says it doesn’t matter anyway as Marcus doesn’t like her back.

Back at the bar, June asks John what it was like camping with Dale. John doesn’t want to bad mouth her ex, but June encourages him to say what he wants. John boasts that it was terrible. When Meemaw tries to change the subject, John says a lot of people there like to talk about the game. Meemaw is surprised to hear he talks sports now. John demonstrates by shouting that the ref should go back to referee school and this time pay attention in class.

Back home, Keith sees George shouting at the TV as he watches the A&M game. George is surprised one of Sheldon’s science classmates likes football, but Keith insists scientists can be normal guys. Not in George’s experience. When Mary goes out to the porch with coffee for Sam, she tells Mary she doesn’t have to keep waiting on them. Mary wonders what the problem is. Sam says she’s frustrated - with Sheldon, with Keith, with every other guy in their field. There were only three other women in their class and one just dropped out to get married. Sam says none of the guys in her class take her seriously, and she doesn’t think it helps when women like Mary run around waiting on them. Mary says she’s just being a good host, but Sam accuses her of raising another boy who thinks that all women are note takers and mommies. Mary argues Sheldon doesn’t look down on women, he looks down on everyone.

In the mall food court, Georgie and Missy are discussing films when she sees Marcus again. Georgie suggests she go talk to him, but Missy thinks that would be crazy. Elsewhere, Mary sternly tells Sam that she understands she wants to be appreciated for what she does, but Mary points out that she does too. Homemaking is the choice she made and she’s proud to do it. Mary is sorry if her making cookies is making it hard for Sam, but if she thinks Sheldon is difficult now, she should try him with low blood sugar.

Back inside, Keith tells George that somebody’s got to be in charge, but when you step up and do it everyone gets upset. George asks if his problem is that a woman’s mad at him and Sheldon thinks he’s dumb? “Welcome to my world”, says George. George tells Keith that he should stop complaining as this is as good as it gets. He’s young, he’s smart, he’s not tied down, so he should go back in there and finish the project. As they get back to work, Adult Sheldon says his parents got them back on track. They listened to each other and worked as a team, for four whole minutes.

At the mall, Georgie tells Missy to say hi to Marcus, keep it casual and pretend she doesn’t care. When Missy walks over to Marcus, Georgie watches as Marcus smiles and talk with Missy. When Marcus tries to put his hand on Missy’s shoulder, Georgie loses his cool and shouts “No touching!” at him from across the food court.

When Meemaw gets a phone call from John, he says it was a nice surprise running into her the other day. John asks Meemaw if she thinks June might be interested in him romantically and wonders whether she could ask her for him. Meemaw says no, but gives him June’s number. When June answers the phone, John jumps straight to asking if she has any romantic interest in him. June is taken aback and says he doesn’t beat around the bush. After John explains the origin of that phrase, June admits she didn’t feel like they had that kind of connection. A deflated John reveals he’s still kind of heartbroken over Connie. June says although she doesn’t know them very well, John shouldn’t write off Connie just yet. June saw the way Connie was looking at him. June tells John to trust her that Dale is going to screw up his relationship with Meemaw.