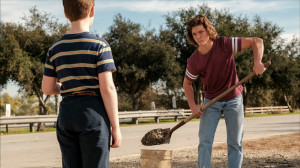 When Georgie identifies a get rich quick scheme to mine for platinum in roadside gravel, he needs Sheldon's scientific expertise. Meanwhile, Mary is concerned when Missy takes up prayer to help with a baseball slump.

Missy: If you're unhappy, just ask God for help.
Sheldon: I don't believe in God.
Missy: [shushes] He can hear you. He knows if you've been bad or good. Like Santa, but he can send you to hell.

George Jr.: Tell me, Sheldon.
Sheldon: It occurred to me that a good way to generate a positive cash flow would be to curate popular songs and make them available in a digital form. Possibly on a small device that could also be used as a phone or even a camera.
George Jr.: Right. [mocking] A phone, camera, music machine. Get out of here.

George Jr.: "Sell blood or non-vital organs."
George Sr.: Mm, give 'em your brain. You're not using it. [Sheldon laughs] I think that's the only time I've ever heard you laugh.
Sheldon: That's the only time you've ever been funny.

George Jr.: Should I be wearing all that?
Sheldon: I recommend it. Those rocks are filthy.
George Jr.: I'm good. God made dirt. Dirt don't hurt.

Adult Sheldon explains that the Clean Air Act required new vehicles to have a catalytic converter, with California the first state to mandate this. Although the reaction in Texas to California’s efforts was negative, it did lead, about six years later, to one Texan seeing an opportunity to get rich quickly. When Georgie goes into the living room with a newsletter full of get rich quick schemes, Sheldon and George are dismissive, until Georgie mentions that platinum can be extracted from ordinary roadside gravel. George doesn’t believe it, but Sheldon confirms it’s true. Georgie is sure he’s hit a gold mine.

At Missy’s baseball game, George is videotaping as Missy strikes out. When Missy goes to bat again, she strikes out for a second time. As the game goes on, it happens again and again. During the car ride home, Missy is down about her performance. George tells Missy she’s just going through a little slump, which happens to everyone. George tells her to get out of her head and stop thinking too much, but Missy doubts that’s the issue. As Mary tries to share what she does when she’s feeling down, everyone already knows the answer: pray. When Mary promises to pray for Missy tonight, Missy thinks it would be better now while God’s got some free time.

When Georgie goes to see Sheldon in his room, he finds his brother playing Oregon Trail on his computer. When Georgie asks Sheldon if he knows how to get the platinum out of gravel as they discussed, he says it’s not a complicated process. He could probably do it with his Professor Proton Science Kit, although he would need an oven that reaches 2,000 degrees. Since they don’t have one of those, Sheldon proposes building one out of a trash can and a leaf blower. When Georgie suggests they go mine some platinum, Sheldon says no thank you as he doesn’t care about money. Georgie questions whether he cares about science, reminding his brother that this is a chance to do an experiment. Georgie asks him what Professor Proton would think? Sheldon agrees to collect gravel.

When Missy goes bat at practice, Coach Dale reminds her to bend her knees, put her elbows out and keep her eye on the ball. Missy decides to take a moment to pray. After her prayer, she manages to hit the ball in a perfect shot. Meanwhile, at the side of the road, Sheldon points out the perfect spot to collect gravel. Georgie immediately starts shoveling, but Sheldon just stands there with his bucket and shovel and observes.

As Mary drives Missy home from practice, she asks how it went. When Missy mentions she hit the ball further than anyone else, Mary says it sounds like a little prayer worked. Missy sounds surprised as she admits it does, confessing she was worried that God knows everything and she has some pretty evil thoughts. After Missy wonders about wearing a cross so God knows she’s for real, Mary says she could also clean up her thinking. Elsewhere, Sheldon wonders what’s taking so long as he sits safely in the truck. Georgie argues it would go faster if he helped, but Sheldon says they know that’s not happening.

Back in Mary’s car, Missy says a prayer to thank God for helping her at practice. Back home, Sheldon is wearing an apron and gloves as he and Georgie get ready to sift the rocks they gathered. After Georgie remarks that it’s like finding money in the street, Sheldon wonders why his brother is so obsessed with money. Georgie says the dad in Back to the Future had a skinny wife who loved him way more after he became rich.

In the kitchen, Mary tells Missy she has something for her. Since Missy said she wanted a cross, Mary gives her the one she used to wear when she was younger. Missy puts on the cross and prays to God, asking for a lot of hits on Saturday and saying she would be okay if the other team’s star pitcher was hit by a truck. Out in the garage, Sheldon tells Georgie they have to sift the rocks again as sometimes the platinum particles are no more than a few atoms. Georgie remarks that if he was as smart as Sheldon, he would invest in the stock market, or go on The Price is Right. Sheldon is still not moved by the money, agreeing with Richard Feynman that he enjoys the simple pleasure of figuring things out. George walks by and is surprised to see his two sons working together.

When George goes to the kitchen, he tells Mary that Georgie and Sheldon are working on something together. Mary thinks that’s nice and mentions how Missy is now wearing a cross. George says he doesn’t like it, but Mary can’t see why as their kids are behaving. George thinks something bad is bound to happen. Mary thinks he should just be grateful, but George warns that that’s when life hits you in the plums. When Sheldon and Georgie arrive to ask where George keeps his power drill, explaining they want to build a 2,000 degree oven, Mary and George are alarmed and say no. Georgie is disappointed, saying he would have cut his father in on the proceeds, but doesn’t put up much of a fight.

When Sheldon storms into his bedroom, Missy asks what’s wrong. Sheldon explains their parents won’t let him build a kiln, so he and Georgie can’t finish their experiment. Missy tells Sheldon to ask God for help, but Sheldon points out he doesn’t believe in God. Missy shushes him, saying God can hear him and he knows when he’s been bad or good. Sheldon says he isn’t going to ask some magical being for help with his problem. Missy argues she asked for help with her batting and it helped.

At the school, Sheldon wonders why Georgie is being so sneaky when he said they had permission to be there. Georgie says he doesn’t want anyone knowing about their platinum, a thought Sheldon can understand after somebody stole his Nutter Butter. Elsewhere, when Mary picks Missy up from practice, Missy says it went well. Billy Sparks runs over and asks Missy to rub her cross on his bat. Mary is offended at the suggestion and asks if Missy has been doing that. Missy admits she’s been doing that with her own bat, claiming it has been working great.

In the school art room, when Georgie confirms the next steps, Sheldon is surprised he remembered. Georgie says he listens even if he doesn’t understand it. When the kiln starts smoking, Sheldon realizes something’s wrong. Georgie tries to handle it by getting a cup of water from the fountain, but a nervous Sheldon presses the fire alarm in the meantime.

George is furious as he drives his two sons home, demanding to know what they were thinking. When George points out they could have burned the school down, Sheldon says it’s okay as they had permission to use the kiln. After George questions whether Sheldon really thinks the school would let a ten-year-old and an idiot use a 2,000 degree oven, Sheldon realizes his brother is a fibber.

As they arrive home, Missy asks Mary if she’s mad at her. Mary insists she’s not, admitting she’s a little concerned she’s given Missy the wrong impression about prayer works. Mary points out God doesn’t grant wishes. You don’t pray to ask God to give you things. You pray to build a relationship with Him. When Missy says this is all too complicated and she’s going to keep rubbing the cross on her bat, Mary realizes she’s not ready for the cross and asks for it back.

In the garden, Mary prays to God, saying she really needs Him right now. She has tried her hardest to bring her family to His light, but so far, Sheldon doesn’t believe in Him, Missy thinks He’s a magic trick, and Georgie doesn’t think about Him since He’s not a teenage girl. Mary didn’t think she’d ever take a cross away from her child, but she was rubbing it on sporting equipment. She didn’t think there was a wrong way to pray, but Missy found it. Mary asks for the strength to keep guiding her family to Him.

At dinner, Meemaw asks how everyone’s day was. When Mary and George don’t say a word, Meemaw gets the idea. After Mary says she’s going to say grace, Missy thinks it’s “interesting” she’s asking God to bless their food. Meemaw wants to know what the tension is all about so he can appreciate it more. Missy explains that Mary took her cross away and she has a game on Sunday. George can’t understand why she’d do that when Missy got out of her slump. Mary points out Missy was being sacrilegious and some things are more important than baseball. Georgie is happy that his parents are so mad with each other as it’s taken the heat off him and Sheldon.

When Sheldon goes to Georgie’s bedroom to ask if he’s still interested in getting rich quickly, Georgie sarcastically says he’s interested in getting rich slowly like a chump. After Georgie asks him what his idea was, Sheldon says it occurred to him that a good way to make a fortune would be to curate popular songs and make them available in digital form, possibly on a small device that could also be used as a phone and a camera. Georgie mocks Sheldon’s idea as absurd.

At Missy’s baseball game, George calls her over to the fence before she bats and tries to slip her a cross, so long as Missy doesn’t tell Mary. Missy says she wants to do this on her own. Just in case her mom’s right, Missy doesn’t want to make God mad. After Missy steps up to bat and strikes out the first time, she calls for her father.