CBS has issued the press release for the April 5 episode of Young Sheldon, "Jiu-jitsu, Bubble Wrap, and Yoo-hoo".

Billy Gardell (Mike & Molly) reprises his role as Herschel Sparks in the episode.

Jiu-jitsu, Bubble Wrap, and Yoo-hoo – Sheldon is bullied by an unlikely character, and Mary and George disagree on how to handle the situation, on YOUNG SHELDON, Thursday, April 5 (8:31-9:01 PM, ET/PT) on the CBS Television Network. 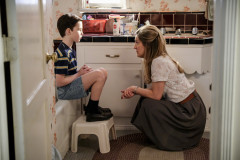 After Sheldon starts learning self-defense, Mary and George are disturbed to find out he is being bullied. When the identity of his unlikely tormenter is revealed, Sheldon's parents disagree on how to handle the situation.