Young Sheldon will be moving to the 8/7c time period previously occupied by The Big Bang Theory, which wrapped its twelve-season run on CBS in May.

Sarah Baker reprises her role as Ms. Hutchins and John Hartman returns as Dr. Goetsch in the season premiere. Matt Hobby, who plays Pastor Jeff, has been promoted to a series regular for the third season.

Quirky Eggheads and Texas Snow Globes – After Dr. Sturgis (Wallace Shawn) experiences a nervous breakdown, Mary worries Sheldon is headed down a similar path. Also, Georgie discovers he has a knack for sales, on the third season premiere of YOUNG SHELDON, Thursday, Sept. 26 (8:00-8:31 PM, ET/PT) on the CBS Television Network.

Young Sheldon was renewed for a third season as part of a two season deal in February 2019, taking the show through to its fourth season in 2020/21. 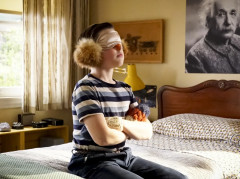