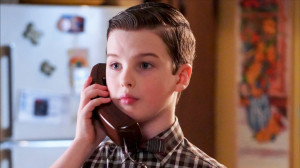 CBS has released the synopsis for the next episode of Young Sheldon, "An Academic Crime and a More Romantic Taco Bell", which airs Thursday, March 5.

“An Academic Crime and a More Romantic Taco Bell” – Dr. Sturgis is furious when Sheldon accuses him of plagiarism. Also, Mary sets out to find a “girl trophy” for Missy’s end-of-season baseball ceremony, and Georgie has an awkward run-in with Veronica (Isabel May) while on a date with his new girlfriend, Jana (Ava Allan), on YOUNG SHELDON, Thursday, March 5 (8:00-8:31 PM, ET/PT) on the CBS Television Network. Louie Anderson guest stars as Ralph, an employee at the trophy store.

The third season of Young Sheldon is taking a short break this week. A rerun of "The Sin of Greed and a Chimichanga from Chi-Chi's" airs this Thursday, February 27.

317. An Academic Crime and a More Romantic Taco Bell

After Sheldon helps Dr. Sturgis with a scientific theory, he's upset when he doesn't receive a credit on John's paper. Meanwhile, Mary tries to find a "girl trophy" for Missy's baseball team ceremony, and George runs into Veronica on his date with Jana.