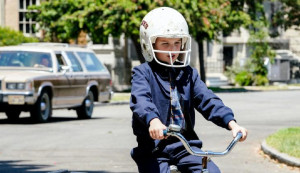 The second season of Young Sheldon will premiere in the United Kingdom next month, digital broadcaster E4 has announced.

E4 will start airing the sophomore season of Young Sheldon on Thursday, November 8 at 20:30. In the show's second season premiere, "A High-Pitched Buzz and Training Wheels", Sheldon gets a paper route after his attempt to dismantle the family's refrigerator leaves them struggling to pay an unexpected repair bill.

New episodes of The Big Bang Theory's twelfth and final season are currently airing at 20:30 on E4's Thursday night schedule, but the show will move ahead to 20:00 slot when Young Sheldon returns on November 8.

201. A High-Pitched Buzz and Training Wheels

When Sheldon is plagued by a high-pitched noise emanating from the refrigerator, his attempt to dismantle the appliance leads to a hefty repair bill. Sheldon takes on a paper route to pay his dad back for the repairs.