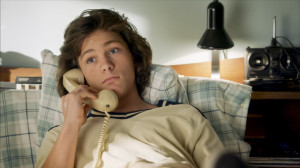 CBS has released the synopsis for the February 20 episode of Young Sheldon, "Pasadena". Wallace Shawn returns as Dr. John Sturgis in the episode.

"Pasadena" - Sheldon visits CalTech for the very first time. Also, Georgie is furious when Mary listens in on a phone call with his girlfriend, and Meemaw tries to cheer up a jealous Missy, on YOUNG SHELDON, Thursday, Feb. 20 (8:00-8:31 PM, ET/PT) on the CBS Television Network.

Sheldon of course grows up to live in Pasadena and work at CalTech, as established on The Big Bang Theory.

Following this episode, Young Sheldon will be taking a short break with a rerun of "The Sin of Greed and a Chimichanga from Chi-Chi's" airing Thursday, February 27.

When Sheldon learns that Stephen Hawking is giving a lecture at Caltech, he tries to convince his father to take him to Pasadena. Meanwhile, Meemaw tries to cheer up Missy, who feels Sheldon gets everything he wants, while Mary is mad at Georgie for lying to her.