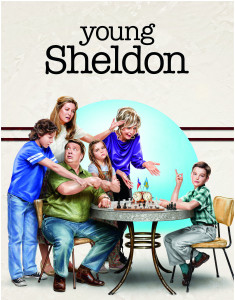 Starting this fall, Young Sheldon will be inheriting the Thursday 8/7c slot of The Big Bang Theory, which ends its twelve-season run tomorrow.

THE UNICORN is a single-camera comedy about a tight-knit group of best friends and family who helps Wade (Walton Goggins) embrace his "new normal" in the wake of the loss of his wife one year ago. As a sometimes ill-equipped but always devoted single parent to his two adolescent daughters, he is taking the major step of dating again. To Wade's amazement, he's a hot commodity with women, and his friends explain that he's the perfect single guy - a "unicorn": employed, attractive, and with a proven track record of commitment. With his daughters and best friends rooting him on and hoping he'll find happiness again, Wade and his healing heart are ready to try life... and love... again. Bill Martin, Mike Schiff, Aaron Kaplan, Dana Honor, Wendi Trilling, Peyton Reed, and John Hamburg (pilot only) are executive producers for CBS Television Studios. Hamburg directed the pilot from a script by Martin and Schiff.

Emmy Award winner Patricia Heaton stars in CAROL'S SECOND ACT, a comedy about a woman who embarks on a unique second act after raising her children, getting divorced and retiring from teaching: pursuing her dream of becoming a doctor. At age 50, Carol is a medical intern and must sink or swim with peers who are half her age. It's her enthusiasm, perspective and yes, even her age, that may be exactly what will make her second act a great success. Emily Halpern, Sarah Haskins; Patricia Heaton, Adam Griffin, David Hunt and Rebecca Stay (Four Boys Entertainment); Aaron Kaplan and Dana Honor (Kapital Entertainment); and Pamela Fryman (pilot only) are executive producers for CBS Television Studios. Fryman directed the pilot from a script by Halpern and Haskins.

The second season finale of Young Sheldon airs tomorrow night at the later time of 9/8c after the series finale of The Big Bang Theory.

Young Sheldon will return for its third season this fall on CBS. The network has also renewed the show for a fourth season to air in 2020/21.