319 'A House for Sale and Serious Woman Stuff' Press Release 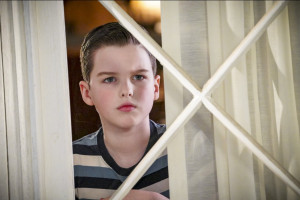 CBS has released the synopsis for the next episode of Young Sheldon, "A House for Sale and Serious Woman Stuff", which will air Thursday, April 2.

"A House for Sale and Serious Woman Stuff" - When Sheldon learns the house next door is for sale, he takes it upon himself to find the perfect neighbors. Also, Missy is torn when she's forced to pitch against her boyfriend at the baseball game, on YOUNG SHELDON, Thursday, April 2 (8:00-8:31 PM, ET/PT) on the CBS Television Network. Jason Alexander returns as Mr. Lundy.

CBS will be airing two reruns of Young Sheldon next Thursday, March 26. There will be another chance to see "Body Glitter and a Mall Safety Kit" at 8/7c and "Contracts, Rules and a Little Bit of Pig Brains" at 8:30/7:30c. 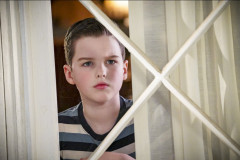 319. A House for Sale and Serious Woman Stuff

When the house next door is put up for sale, Sheldon decides to take matters into his own hands and find a suitable neighbor. Meanwhile, Missy is worried when she has to pitch against her boyfriend at a baseball game.