217 'Albert Einstein and the Story of Another Mary' Press Release 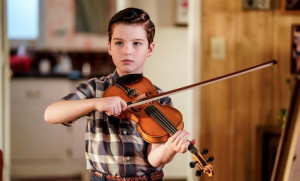 CBS has released the synopsis for the next episode of Young Sheldon, "Albert Einstein and the Story of Another Mary", which air this Thursday, March 7. Ryan Phuong reprises his role as Tam in the episode.

“Albert Einstein and the Story of Another Mary” – Inspired by his hero, Albert Einstein, Sheldon tries his hand at the violin. Also, Mary and Meemaw secretly buy a pregnancy test when Mary thinks she’s pregnant, on YOUNG SHELDON, Thursday, March 7 (8:31-9:01 PM, ET/PT) on the CBS Television Network.

A rerun of "A Tummy Ache and a Whale of a Metaphor" will air the following Thursday, March 14. Young Sheldon will then be off air for two weeks, March 21 and March 28, as CBS airs the March Madness basketball tournament. The second season will return with new episodes on Thursday, April 4.

217. Albert Einstein and the Story of Another Mary